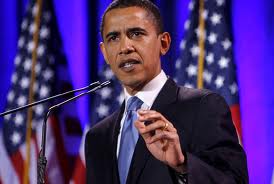 So after four years of run-up, the U.S. election came and went yesterday.  Although the electoral college system is quirky and flawed, the U.S. still ranks among a fairly small number of truly democratic nations that hold properly democratic elections and transfer power peacefully.  Election night is a great evening (or morning) of television drama and can be quite suspenseful some years.  While things were uncertain at some points last night, there was definitely an early sense that it was going to be President Obama's night, even while Ohio and Florida remained unpredictable.  By the end of the night, Governor Romney gracefully accepted that the American people had spoken and lauded the American democratic system.

Israel shares that great democratic tradition with the U.S. and other distinguished company and will go to the polls in January 22, 2013, although as of the writing of this blog entry it appears that the political landscape in Israel is not likely to change any more dramatically than the U.S. changed as a result of its 2012 election.

The whole topic of Israel and the Middle East attracted quite a bit of interest during this U.S. campaign., probably more so than many previous campaigns.  Like in the case with many other issues in this U.S. election, particularly social issues, people's views were very polarized.  There were those, like vice Presidential candidate Ryan and Governor Romney himself, trying to portray President Obama as someone who had "thrown Israel under the bus."  On the other side, there were those like former World Jewish Congress Chair Edgar Bronfman, who staunchly defended President Obama as a great friend of Israel.  Israeli Prime Minister Netanyahu seemed to have gotten himself involved in the campaign in a very partisan and unprecedented fashion and this may not have been such a great tactic for ongoing Israeli-U.S. relations even though it might assist Prime Minister Netanyahu in his dealings with his domestic constituency.

In looking at President Obama's record in his first term, it does seem odd and uncomfortable, to say the least, that the President would fly to the Middle East and visit Egypt - in a very apologetic way - and not find the time to visit Israel. While I appreciate that President Obama visited Israel before the 2008 election (and it is fair to say that his trip was better planned and more graceful than Romney's visit this year), he should have found the time to visit Israel at some point during his first term.  Hopefully, he will visit soon.

It was also unhelpful, to say the least, to lay all of the blame for the failed peace negotiations on Israel by insisting that the first step that must be taken, as a precondition for any negotiation is a building freeze.  President Obama realized this and backtracked somewhat.  But his call for a return to 1967 borders also seemed to be handled in a deliberately provocative way even though he added "with mutually agreeable land swaps" to the phrasing.  At the time time, Prime Minister Netanyahu's response was predictably excessive and seemed intended to further the rift with the U.S. President.  Despite all of this, most analysts who are genuinely interested in a peaceful solution recognize that the eventual result will have to be a two state solution with mutually agreeable land swaps.  This is even a solution that the present Israeli government has endorsed - and certainly the kind of solution that former President Bill Clinton pushed so hard to achieve, while remaining extremely popular in Israel. 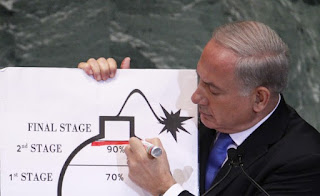 Another source of tension between Prime Minister Netanyahu and President Obama has been the issue of Iran.  President Obama has overseen a series of very significant sanctions imposed on Iran in an effort to cease the Iranian nuclear program.  Yet despite these sanctions, it is far from clear that the sanctions will actually result in Iran dismantling its program.  So it does seem reasonable for Prime Minister Netanyahu, as he proposed at the U.N. to ask that the world draw a "red line" beyond which other means may become necessary if Iran continues to develop a nuclear program.  Neither President Obama nor Governor Romney were willing to stake out a "red-line" position and in the third U.S. debate, their positions on this issue sounded very similar if not identical.  It may well be naive, given Iran's history, to assume that Iran will concede its position as a result of the sanctions or that this plan of action will actually stop Iran from producing nuclear weapons.  But it is unclear whether any U.S. president would support Israel in conducting a pre-emptive attack at this time.

It may well be the the source of tension is also related to a personality clash between Prime Minister Netanyahu and President Obama or a perception of policy direction rather than actual policies that have been implemented.  In fact, the level of strategic, military and economic cooperation between Israel and the United States is it one of its highest points ever and the two countries remain very close allies and friends.

In Israel, the perception of antipathy towards Israel by President Obama apparently translated into a voting trend by absentee American voters living in Israel choosing to vote for Governor Romney by a margin as high as 85% to 15%.  Of course, the explanation that has been suggested by some is that a significantly high percentage of American expatriates living in Israel are observant Orthodox Jews who might also share some of the social policy preferences of the Republican party and are likely to vote for "right wing" parties in Israel.  I am fairly confident that if one were to poll Conservative (Masorti) and Reform American Jews living in Israel, the results would be quite different.

On the other hand, President Obama apparently carried close to 70% of the Jewish vote in the United States itself.  While some suggest that this is because many American Jews are apathetic about Israel, I don't think this is the real explanation.  American Jews tend to share many policy preferences on a whole range of social issues with the Democrats rather than the Republicans (ranging from abortion and gun control to who might be the most suitable candidate for appointment to the Supreme Court).  Further, while many of these American Jews are staunchly supportive of Israel, that is not necessarily synonymous with being staunchly supportive of all of Prime Minister Netanyahu's policies.  In fact, many very committed Israelis have views about the peace process and other matters that are diametrically opposed to those of Israel's current Prime Minister.  Overall, most American Jews probably prefer Edgar Bronfman's viewpoint that President Obama is, and will continue to be a strong friend of Israel rather than the rhetoric that was coming from the likes of Sheldon Adelson.

Even though President Obama has vowed to continue the strong relationship between Israel and the United States, there are certainly areas of concern.  The tension over Iran's nuclear program will heat up as Iran draws closer to its goals.  The continuing absence of a peace agreement between Israel and the Palestinians is also a sore spot and one that is potentially explosive.  And the personal tension between President Obama and Prime Minister Netanyahu has probably been exacerbated after Netanyahu's failed efforts to bolster Governor Romney's campaign.

The tension even increase further if President Obama chooses to become as involved in the Israeli election as Prime Minister Netanyahu was in the American election.

Yet, it seems to me that with all of this said, the best thing that President Obama could do in the area of Mideast policy, would be to plan a visit to Israel, Jordan and the area governed by the Palestinian Authority at a fairly early stage in his second term.  With a short but meaningful visit, President Obama could send a confidence boosting message to the Israeli public and to the Palestinians that would probably help him regain some of the trust he would need to oversee a peace deal successfully.


Posted by Ranana Reveller at 7:46 PM