Austrian Airlines - with Stopover in Vienna

It was about time to try a different route from Toronto to Israel so I decided to give Austrian Airlines another chance - and spend a day travelling around Vienna.  I have transferred through the Vienna Airport a few times but have never left the airport to spend the day touring.  So this was a first.

I had previous written a blog on transferring through Vienna from Toronto to Tel-Aviv back in September 2011 here.  But there were a number of points to update.

I booked this flight through FlightHub - which was quite reasonable these days and it was "low season" in any event.  I managed to get a flight with one way via Vienna and the way back direct on Air Canada.  So it really wasn't a bad way to spend a day in Vienna and it worked with my schedule.

Austrian Airlines has some quirky policies.  For example, in economy class you can only book a seat in advance if you want to pay.  Otherwise, you can reserve a seat when you check in 36 hours before departure.  It is not that you get a special seat for booking in advance - just a regular seat.  Even having special status on the Star Alliance system does not help.  I took my chances and booked my seats 36 hours before check-in - and the seats were fine.  There were many good seats available.  So I guess you just have to make sure to go online exactly 36 hours or so before your flight and book the seats.

The flight itself from Toronto to Vienna was fine.  It was a 2-3-2 configuration - so reasonably roomy seats compared to the new Airbus planes that Air Canada is using.  With a 3-3-3 configuration, those seats are quite cramped.

Austrian has updated its planes somewhat. So there is now a reasonably modern entertainment system with a decent selection of new movies as well as games, TV programs etc.,  I watched one movie and tried to sleep for as much of the flight as I could.

I ordered an Asian Vegetarian meal (which usually means curried chick peas and/or tofu on rice).  It was a much more substantial meal than I get on Air Canada and it was fine.  The Austrian flight attendants are highly visible, wearing hideous bright red outfits with white aprons.  But they walk up and down the aisles all flight.  They are constantly coming around with beverages, which is quite a contrast with, for example, El Al.

The flight arrived in Vienna at about 8:30 a.m.  My baggage was checked though so it was just a matter of walking through immigration and then heading out to see the city.  There is a luggage storage facility at one end of the Terminal (upstairs).  For 4 Euros a day per bag, you can check whatever you like.  So I left my carry on items there, other then essentials, and headed out.

The Vienna airport is connected to the train system.  You have a few choices.  You can take a higher speed express train from the airport to downtown Vienna for 14 Euros each way - and the ride takes about 16 minutes.  Or you can use the regular train system in which case the train makes a few stops and takes about 26 minutes.  I bought an all day transit pass - which cost 7 Euros.  There was a 2 Euro supplement to take the train from the airport but I was all set.  The trains do not come every few minutes - it is more like two or three per hour.  So my next train was not until 9:45, arriving at 10:15 or so in Vienna. The "express train" was not operating more frequently so the difference would have been negligible.

In any case, I took the train to the main Vienna station "Wien Mitte."  From there, I changed trains and headed over to "Stephensplatz" a very centrally located station for walking tours.

Vienna is a very historic city with interesting buildings, palaces, statues and museums throughout the city.  Just wandering around the streets is certainly an experience.

I decided to start off in the old Jewish Ghetto.  I saw the Holocaust memorial and went into the first of two Jewish museums.  I really wouldn't say that there was anything particularly fascinating about the museum.  In fact, if anything, the history of the Viennese Jewish community is quite a sordid one.  Both museums note that Vienna had one of the largest, most vibrant Jewish communities in the world as early as 1150-1200 C.E.  In 1420, the entire community was expelled, massacred and/or converted (but mostly expelled and massacred as far as I can determine...).

After about 100 years or so, the Jewish community took advantage of Austrian "tolerance" and began to return to Vienna.  The community faced many challenges until its eventual "emancipation," hundreds of years later.  Of course, not so long after the emancipation, there was Hitler, the anschluss and we all know the rest of the story.  After wandering through these two Jewish museums, one is simply left with the question of how any Jew could consider living in Austria given the history of that country.  Yet there is Jewish community now (albeit a small one) with a Jewish Community Centre and some other facilities. 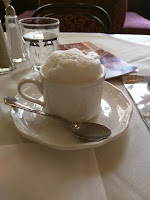 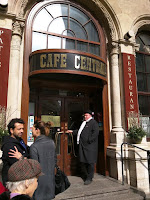 For a taste of Austrian culture and cuisine, I decided to visit an Austrian Coffee House. I went to Cafe Central, which is quite a well known place.  I tried the house specialty - Viennese Cafe Melange, which was basically a cappuccino.  I also tried a coffee with Apricot liqueur which was tasty.  It was a fairly formal atmosphere - service from waiters wearing tuxedos with white aprons.  There is a newspaper gallery so that patrons can pick up a newspaper and enjoy a leisurely read with their coffee.

I left the coffee house and decided to wander the streets of Vienna and see the palaces, sculptures and churches.  I was getting quite tired but the weather was fairly decent and the city was reasonably manageable by foot.  I didn't bother taking the train even though I had an all day pass.  Instead I walked from place to place.


I didn't actually go inside and take the inner tour of any of the churches or palaces.  Partially, this was simply timing but it was also due to the fact that preferred to wander around outside.

By 4:00 p.m. or so, I was sufficiently tired out. I took the train back to the airport, picked up my checked luggage, hit the duty free shop and made my way over to the lounge.  I should note that the duty free prices in Vienna for whisky were quite reasonable - especially compared to the prices in Israel or Canada.  For example, a bottle of Glenmorangie Duthac (a splendid whisky in my view) was 70 Euros for a one litre bottle. That same whisky sells for $130 USD at the Israeli duty free shop...

The lounge was decent.  It had some food, drinks, comfortable seats and free wi-fi.  So I had some rest and relaxation time for a few hours until the flight.

The flight from Vienna to Tel-Aviv is only about 3 1/2 hours.  It is a Airbus plane with very cramped seats and no entertainment of any sort.  The flight was jam packed but it was a short flight, on time and uneventful.  The only problem was that it arrived in Israel at 12:40 a.m., which is a really lousy time to arrive somewhere.

All in all, I guess I can say I have had a small taste of Vienna.  Nothing that I saw while wandering around or that I read about in the travel book that I had with me is calling me to spend another day.  In fact, I would probably pay a fair bit more to avoid the connection time and skip another day in Vienna. This is quite a contrast with the day I spend in Amsterdam - which left me feeling that I could easily spend another week there....

In any event, it is nice to be back in Israel in time to practice Megillah reading, get everyone's costumes ready, cook up some treats and prepare for the Purim celebrations.

More on other topics soon....


Posted by Ranana Reveller at 4:09 PM

Email ThisBlogThis!Share to TwitterShare to FacebookShare to Pinterest
Labels: Austrian Airlines, getting to Vienna from the airport, Stopover for the day in Austria, Toronto-Tel-Aviv