Fireworks At Weddings in Israel? Call the Police!

Some Israeli weddings can feature extravagant fireworks displays.  I have driven by a few wedding halls, visible from the highway, that have promoted their explosive offerings on eye-catching billboards.  But some pyrotechnic presentations go overboard and can become quite dangerous.

In mid May 2012, at a Palestinian wedding at a town near Ramallah, a fireworks display misfired causing injuries to 28 people, 4 of whom were seriously injured.  No doubt this sparked the subsequent police crackdown on illegal fireworks usage that has led to a number of arrests.

According to YNet News, Israeli police confiscated more than $10,000 worth of illegal fireworks in a raid last month (in September, 2012).  The fireworks were to be set off during a wedding.  The bride was apparently fuming mad at the arrest of her groom, his father and another relative.

Yesterday, October 31, 2012, police reportedly seized more than $25,000 worth of fireworks and arrested the groom at the Shuafat Refugee Camp.  The fireworks display that had been planned apparently would have rivalled some of Israel's official fireworks displays that are presented on national holidays. 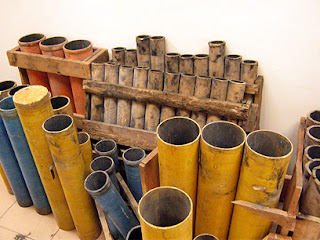 This police photo shows some of the confiscated items.  Many  of the weddings, primarily Palestinian weddings, featuring these large scale displays have been taking place just north of Jerusalem.  Complaints from nearby residents as well as the injuries that occurred earlier this year have led police to conduct more raids.

Meanwhile, in Shuafat, it now looks like the bride and groom will have to create their own fireworks, assuming the groom has been released from custody.

If you are planning a wedding or some other event in Israel that will feature fireworks, it is probably a good idea to ensure that you have the proper licence and authorization for the intended display.  Otherwise, it could be lights out if the police show up.
Posted by Ranana Reveller at 1:56 AM