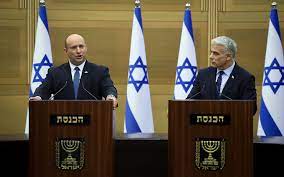 Shavua Tov (Happy New Week), Happy Juneteenth (if that's the right greeting) and welcome to summer (just about).  I have decided to put together this quick blog with some breaking news and a few other bits....As always, I welcome comments and invite discussion.  And there is certainly lots to discuss...

After one year of governing in Israel with a diverse, rag-tag coalition, Prime Minister Naftali Bennett held a press conference today with his coalition partner and alternate Prime Minister - Yair Lapid. At the press conference, Bennett announced that he had done everything he could to keep the government together but they had reached an insurmountable roadblock and would have to dissolve the Knesset (the Israeli Parliament) and call an election.  If the dissolution proceeds, as expected, the election is likely to fall at the end of October.

As might be expected, Bennett reviewed what he maintained were the successes of his government.  His list included an improving Israeli economy, the notion of working together with political opponents for the benefit of the country,  and advances in a number of different areas.  He praised his coalition partners and thanked them for serving in the government, particularly those who had served as cabinet ministers.  Bennett also indicated that he would honour the coalition agreement and transfer power to Yair Lapid - who will become the interim Prime Minister of Israel - assuming the transfer can be put through the Knesset.  If this goes through - Lapid will become a caretaker, lame duck Prime Minister of Israel, charged with steering the country through to the next election - and post-election until a new government can be formed.

Bennett himself faces a very uncertain future.  His fellow Yamina party members have largely abandoned him and commentators have speculated that this is the end of his party.  Bennett still intends to remain in politics but it is unclear at this point - which party he will represent.  It is also unclear where his fellow Yamina members will go.  Some might join Likud - perhaps with enticement from Netanyahu.  Others might move further to the right and join the Ben-Gvir/Smotrich party.  If Yamina were to run in its present form, it seems unlikely that it could even make it past the electoral threshold.

Lapid also spoke at the press conference - but his talk was quite abbreviated.  He thanked Bennett and told him that he really believed that Bennett was acting for the good of the country over the course of the coalition agreement - even though he and Bennett have their disagreements.  He thanked Bennett for their friendship and, yes, expressed his love and respect for Bennett.  It was somewhat emotional.  Lapid then stated that there are still many pressing issues to address - and time will not stop and wait for the election or the post election results.  He intends to roll up his leaves and get to work even though he will face significant hurdles in trying to do so.

We may still see some political wrangling between now and a vote to dissolve the knesset.  There may be a way for the opposition to prevent Lapid from taking power.  We might even see Netanyahu make an effort to put together a 61 seat government.  This does not seem likely but anything is possible.  I would imagine that the dissolution bill will be passed within the next week to ten days though I am not totally clear on what is actually going to happen after that.

It is too early to speculate on what may happen in the next election.  There is a reasonable possibility that the "right" bloc, led by Netanyahu, will amass a sufficient number of votes to build a coalition and take back power.

But nothing in Israel is a certainty.  There may well be a sizeable number of Israelis who view this coalition government as having offered a refreshing change - and a harbinger of new types of government in Israel.  If Netanyahu and his "bloc" cannot put together 61 seats - we may well see another type of coalition government - even if it is not led by Bennett.  Suitors for the role are likely to include Avigdor Lieberman, Yair Lapid and Benny Gantz.  There may well be others.

Opposition leader and former Prime Minister Benjamin Netanyahu spoke shortly after the Bennett-Lapid press conference.  He was smug, arrogant, and completely dismissive of the current government.  He called it a failed government and said that from talking to "people in the streets," he is well aware that Israelis can't wait to have him and his government back in power.  I would imagine that there are certainly some segments in Israeli society who would agree with him but many who would not.  My sense from this press conference was that Netanyahu is living in a bit of an alternate universe - but I would not rule out the possibility that he may still be able to win another election.  Of course he was also using the opportunity to try and "spin" things as favourably as possible.  We will have to wait to see what the Israeli public really thinks.

Interestingly, Netanyahu stated more than once that the current government is a government held together and bolstered by "terror supporters"  (he was referring to the Arab Ra'am party led by Monsour Abbas) and he stated, definitively, that he would not form a government supported by Abbas (who has currently been an active member of the current governing coalition).  Netanyahu's numbers may not quite add up - and he may well come to visit Mr. Abbas with his hat in his hand, looking for some support down the road.

In any event, the next few months promise to be interesting political theatre in Israel.  I expect lots of suprises, lots of drama, lots of vitriol and some very loud discourse.  Then again, how is that different from any other electoral campaign in Israel?

Airports in both Canada (at least Toronto) and Tel-Aviv are incredibly crowded these days.  For leaving Israel, airlines are requesting that passengers arrive four hours before their flights.  I left Israel on Sunday June 12th and it took more than two hours to get through the first part of Israeli security.  Of course there are still three other security/exit stations to leave Israel  - so it probably took close to three hours to get through everything.  Don't worry - I still had a bit of time to visit the duty free shop but it was a long, frustrating and time-consuming experience.

Toronto Pearson Airport has been using a "metering" system for arrivals. Essentially, they keep you in the plane, away from a gate, for an extended period of time.  Then they announce that only passengers with "connecting flights" will be able to leave.  Naturally, the plane itself becomes quite chaotic.  People without connecting flights get up and take all of their luggage to the front of the plane, blocking the aisles and pushing forward to try and get off the plane first.  Our arrival in Toronto was quite a zoo.

Once we were out of the plane, the line up was not that terrible - especially for those with a Nexus pass.  And there were no real delays at the baggage carousel.

I have also left Toronto Pearson airport recently.  With Air Canada status, the line ups are not too bad - but for everyone else, it looks fairly chaotic.  Going to the U.S. from the Toronto  Airport is incredibly crowded, with extensive line-ups, fewer than normal staff at security and at customs - and lots of overstressed travellers.  Leaving for Israel from Toronto (or any other international destination) is probably a bit easier since you don't have to pass through customs on your way out as you do for U.S. travel.

We recently watched the second season of Tehran.  The final episode was released this past Thursday night.  The first season featured a largely unknown cast but there were some terrific actors.  This second season was filmed in cooperation with Apple TV and brought in Glenn Close as an Israeli spy, operating in Tehran, to supplement the cast from the first season. I thought the second season was somewhat better than the first - and, overall, was quite rivetting.  For now, I think it can only be watched on AppleTV.  If you speak hebrew, you can watch it on sdarot.buzz, an Israeli streaming channel or on Israel's Channel 11.  Not sure if there will be a third season, but if so, I will look forward to it.  I understand that filming is also in progress for Fauda's fourth season.  Lots of recent Israeli programming to watch and much of it is very good.

With hockey playoffs just about over, football season still three months away and few other sporting events that really grab my attention, I may have to find a few other series to watch.  I welcome recommendations.  I don't mean to disrespect the Blue Jays, by the way. They have a very exciting team this year but I can't really see watching 162 games a year.  I will probably watch more baseball as it gets closer to the playoffs.

In any event, it is the summer and I hope to make it to the beach, the lake or some other water activities.  So I probably don't need to watch too much TV anyways.  Would definitely rather go for a swim.  Or visit a winery....

We are looking forward to having some visitors over the summer, some who have been to Israel several times and some who are coming for their first time.  Although it is usually very hot in July and August (even intolerably hot), there is lots to do.  When we are not out and about, we put our faith in our air conditioning units - and the hope that things cool down somewhat in the evenings.  Sometimes it cools off considerably, sometimes it doesn't. For those who are thinking of visiting Israel, it is better, from a weather perspective, to come in March/April and October/November - maybe even September - if you have a choice.  Many people don't - and find that their available dates are dictated by school and work schedules.  This summer, in particular, Israel is expecting a very large number of tourists.  The planes are full (and tickets are very expensive).  Hotel prices are also very high.

The Israel Museum has still not announced dates for the annual Jerusalem Wine Festival (which is a wonderful event). It is probably going to take place in August this year.  There are hundreds of scheduled concerts across the country - so many musicians trying to make up for the loss of the past two years of live entertainment.

So even though it is quite hot in the summer - there is so much to see and do in Israel that pretty much any time of year is a good time.

Wishing everyone a wonderful summer.  Not sure how many blogs I will put together in the coming months but I am sure that I will write a few as the election draws closer.

Posted by Ranana Reveller at 4:29 PM No comments: