Over the past year or so, I have flown a number of times between Toronto and Israel on both Air Canada and El Al - the only two airlines that currently fly direct between these two cities.

While there are positives and negatives about each - here are a few comments.

Aeroplan (Air Canada's loyalty program)is a huge plus in favour of Air Canada. You can collect more than 10,500 points on a round trip flight - 2/3 of the way to a short haul ticket. After just about 3 flights in a year - you get upgraded to Elite Status - and you wind up with a range of benefits - including being able to take 3 bags instead of 2, bypassing most line ups, and getting some upgrade certificates. Many of these benefits can be used with any Star Alliance airline - not just Air Canada. El Al's loyalty plan, "Matmid" is much more limited, has fewer partners, and generally requires you to fly much more often to obtain the benefits of the program. You even have to pay to join it!

Air Canada has personal video/tv screens on its Toronto-Tel Aviv route - with a wide selection of movies and audio entertainment. The seats feel more comfortable and the overall experience is somewhat more easy going. El Al has a few portable units available for rent on each flight - but most passengers are stuck trying to watch the communal movie.

El Al currently has much better flight times. You can leave Israel late at night - just before or just after midnight, depending on the time of year - and sleep for most of the 12 1/2 - 13 hour flight. Flying from Toronto to Israel, you can also fly in the early or late evening. This is a huge plus for El Al - since the flight times also affect how easily you can adjust between time zones. Air Canada recently changed its flight times to travel at 12:45 p.m from Israel for all of its flights. This means a 13 hour, daytime flight. It makes for a very long day.

El Al has its own security system, which is generally more sensible, thorough and comforting than that of any other airline. Recently, Air Canada added in supplementary security for flights leaving Toronto to Tel Aviv - but the advantage here goes to El Al.

Pricewise - they are usually about the same - though occasionally you can find a better deal with one or the other which can make a difference of as much as $500.

With El Al, all the food is Kosher. So if you are interested in a Kosher meal, the food is more likely to be fresh, properly cooked and properly thawed - than Air Canada - where you usually wind up with frozen fruit pieces for breakfast.

In the area of "intangibles" - well it's Canadian service versus Israeli. Air Canada would probably be more attentive and polite; El Al - less formal - and sometimes friendlier - though often much less attentive.

One other option (aside from the various flights available with transfers in Europe and New York) is to fly through Philadelphia with US Air. You can still get the Aeroplan points - but you can get the evening flight back from Tel Aviv. The hassle is dealing with U.S. customs - including checking back through in Philadelphia.
Posted by Ranana Reveller at 9:09 AM 1 comment: 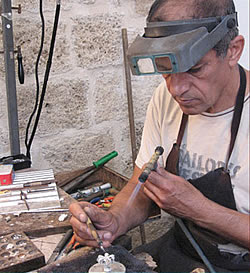 The museum will feature interactive displays with opportunities for children to help create their own unique pieces. Ben-Zion is also available by reservation to demonstrate the art of Yemenite filigree where participants can witness the magic of the creation of a piece of jewellery made from one wire before their very eyes. There is a coffee bar serving Yemenite coffee and Jahnun. The museum, workshop and the adjunct gallery can be toured in less than an hour and are centrally located on Mazal Dagim Street in Old Jaffa. The museum is free of charge and is open Sunday to Thursday 9 to 9. It is open on Fridays up to Shabbat and one hour after Shabbat. 3 Mazal Dagim Street. 03-6812503.
Posted by Ranana Reveller at 6:33 AM No comments: