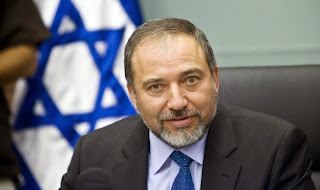 Avigdor Lieberman heads the "Yisrael Beitenu" ("Israel, Our Home") party in Israel.  He is a bit more of a complex politician than one might have thought.  On the one hand, he is viewed by some as a far right wing nationalist.  Certainly he has made some comments in the past about Israel's Arab population that can only be described as "racist."  He is unpredictable and will often say some things that many politicians would probably later regret.

At the same time, he can sometimes be far more practical than his right wing Israeli counterparts.  Lieberman, for example, has indicated that he is prepared to support a true "two-state solution" whereby one state would be a Palestinian state for Palestinians and the other state would be a Jewish state.  While some of his opponents call this a form of "ethnic cleansing," it is actually a far more logical solution than such epithets might suggest.  As part of any solution to the Israeli-Palestinian conflict, he argues, the Palestinians should be prepared to resolve any issue of Palestinian refugees by taking in as many Palestinians as would like to come - to their nascent state.  In this context, he also argues that it is logical to draw the borders of the two states in such a way that the large Jewish populations in Gush Etzion and other West Bank areas remain in Israel; whereas areas with overwhelmingly Palestinian populations, even if those areas are currently part of Israel, are to be ceded to the Palestinian state.  These proposals, he holds, would be most likely to ensure that there is a truly workable two state solution to the Palestinian conflict.  For many, this makes much more sense for Israel's long term security than Bennett's plan to annex the West Bank ("Judea and Samaria").  Then what?  Bennett and others on the right have no answer.  For the long run, Lieberman has suggested that Israel's Arabs who choose to continue to live in Israel, rather than the Palestinian state, should be prepared to serve in Israel's military or national service and should be entitled to full equality of opportunity.

But getting back to Lieberman's current situation, he is a secular nationalist politician rather than a religious nationalist.  His constituency is in favour of easing the restrictions on conversions to Judaism, lessening the power of the religious authorities over the state (especially the ultra-religious) and reducing state funding of the ultra-Orthodox institutions.  Much of this would explain why Lieberman and his party were able to sit in a government with Lapid's Yesh Atid in the previous coalition, even though Lapid is viewed as much more of centrist.

But now, Prime Minister Netanyahu has reversed directions completely from the previous government that he led.  The first party that he signed up to join his coalition was United Torah Judaism.  I wrote about the concessions that Netanyahu made in my lost blog.  Certainly these concessions would be very hard to stomach for anyone with Lieberman's views about religion and state.  The concessions make it virtually impossible that Lapid's Yesh Atid party would even negotiate with this government, let alone join it.  But Lieberman was still negotiating.

Then today, Prime Minister Netanyahu announced another coalition agreement.  He had signed up the other ultra-religious party, led by convicted fraudster Aryeh Deri and was willing to provide that party with a fat range of concessions and ministerial portfolios.  Things get uglier and uglier by the day for those who endorse some level of shul-state separation or religious pluralism in Israel.

After the Shas announcement, Lieberman announced that his party would not join this government. This will leave Netanyahu with a razor-thin 61 seat government (out of 120 in the Knesset), once Netanyahu finalizes an arrangement with Bennett's "Bayit Yehudi" (Jewish Home) party.

It is too early, in my view, to determine whether Lieberman is using this pressure as a negotiating tactic to wrangle some further concessions out of Netanyahu or whether he is taking a principled approach.  It is fair to say that over the years, Lieberman has not always been characterized as a man of principle.  We will probably have a better idea over the next few days.

If Lieberman stays out of the government, the big winners are bound to be Yair Lapid and Lieberman himself.  Many Israelis who voted for Likud or Moshe Kahlon's Kulanu party will be sorely disappointed to see that the biggest priority of their new government will be to restore a vast range of funding to various ultra-religious programs and to retract on the requirement that ultra-orthodox share the military burden of defending the state.  Many Israelis will find it hard to fathom that the solution for Israel's current financial situation is to take huge sums of money and pour it into ultra-religious programs, at the expense of universal health, education, infrastructure and other priorities.  This could mean a relatively short-lived government and a big boost for Lapid and Lieberman in the next election (at the expense of Likud and Kulanu seats).

On the other hand, if Lieberman simply uses this opportunity to extract further concessions for his party and himself and then joins a government which goes ahead with this ultra-religious program, he will undoubtedly alienate even more of his constituency (he had already fallen from 13 to 6 seats in the most recent election).

It should be interesting to follow.  I am inclined to suggest that many Israelis watching these events unfold will be much more likely to vote for Lapid in the next election.  This could create quite the pendulum swing in the religion-state relationship.  For Netanyahu to go ahead with such far reaching changes, while only holding a one seat majority, will be perilous for him and his party - as well as for Kahlon who will be seen as an accomplice to this shift towards the ultra-religious.

Then again, all of that is an "optimistic" view of Israeli voters from a democratic, pluralistic view point.  If Israelis really do prefer to have the ultra-religious hold the balance of power....well...it becomes hard to imagine where we are headed.

Prime Minister Netanyahu is supposed to present the final governing coalition by May 7, 2015.  It will be fascinating to see what takes place in the late night, closed door meetings between now and then.


Posted by Ranana Reveller at 6:24 PM