Out of the Depths: Chief Rabbi Israel Meir Lau - a Review

On my lengthy flight back to Toronto, I had the chance to read Out of the Depths, as it is named in its English version, the memoirs of Israel's former chief rabbi, Israel Meir Lau.  Rabbi Lau's life story includes his harrowing, heart wrenching and, at times, miraculous survival from the Buchenwald concentration camp and his liberation from that camp at the age of 8 years old.  Rabbi Lau recounts stories of the murder of his family members and the way in which his heroic brother saved his life and watched over him until the Nazis were finally defeated.  He managed to survive Buchenwald as one of its youngest survivors.  This section of the book is compelling and challenging, like many of the stories of other Holocaust survivors.

The book then shifts over to Rabbi Lau's  yeshiva upbringing and his encounters with many of Israel's great rabbis as he grew up in the nascent State of Israel during a time in which the newly established country was struggling for its existence.  He provides various glimpses into the world of yeshiva learning and the mindset of many of the yeshiva students and teachers.  As the book wends its way through Rabbi Lau's ascent to the highest rabbinic position in Israel, it covers a number of different talmudic commentaries, midrash stories and siddur quotes that are interwoven into the Rabbi's life story, just as his historical background is woven into the very fabric of his everyday life.  Along the way, Rabbi Lau discusses the influence of and interaction he had with many different rabbis, ranging from his own teachers and mentors to other world-famous rabbis including the Rebbe of Gur and the Lubavitch Rebbe.

The later parts of the book begin to discuss various encounters that Rabbi Lau had with Israeli and world leaders including Shimon Peres, Yitzhak Rabin, Elie Wiesel, Pope John Paul II, Fidel Castro, King Hussein, Karim Abdul-Jabbar and others. Some of the meetings and dicussions that are recounted are fascinating though this part of the book has less of flow to it and is somewhat disjointed.

The book generates some very difficult questions, theological, historical and existential, which continue to bubble after one finishes the book.  How does someone grapple with the theological questions posed by the Holocaust and the murder of six million of our people?  What motivated Rabbi Lau to maintain his belief system and commit himself to a life of "God-fearing" observance and practice after living through the horror of the Nazi period and seeing so many people, so many good people, murdered?  His parents, uncles, aunts and so many other family members were all destroyed along with the Jewish community in Piotrkow, Poland.

One part of the answer that emerges is Rabbi Lau's desire the fulfill his mission and continue an unbroken historical chain.  As the 38th generation of a chain of rabbis going back to year 1000 C.E., Rabbi Lau sees himself as destined to play a role in Jewish continuity.  His father urged his older brother to do all that he could to protect him and Rabbi Lau's brother, Naphtali, followed his father's wishes in awe-inspiring fashion. Rabbi Lau's miraculous survival must have been providently ordained, the book seems to suggest.

Another answer that emerges, the justification of many observant Jews, is the steadfast commitment to continue Jewish observance, custom and heritage in the face of such a large scale destruction of the Jewish community.  In other words, the refusal to grant the Nazis a posthumous victory by allowing the observant Jewish community to vanish.

But I have to confess that I was left with more questions than answers in reconciling some of these aspects of Rabbi Lau's book and his story.  As Rabbi Lau arrived in Israel, as a young boy, the other immigrants to Israel, all around him were caught in an existential struggle.  They served in Israel's armed forces, built Israel's infrastructure and developed so much of the basis for Israel's economy and other systems that were so crucial at this time period.  It is unclear what involvement he had with this whole struggle that Israel faced (and continues to face) though Rabbi Lau does include stories of pastoral visits to soldiers during times of war.  Rabbi Lau recounts some of his special victories during this time period, including his successful fight to prevent public transportation in certain areas of Haifa on Shabbat (the Sabbath) and to ban the importation of non-kosher meat to Israel.  Later in the book, he cites his success in consolidating some of the powers of the Israeli chief rabbinate and centralizing much of its authority.  Throughout the book, he makes it clear that he was always a staunch Zionist and that he would not leave Israel to accept a posting in another country, even temporarily.

While shaping and developing the Israeli chief rabbinate and working to further the development of yeshivas and orthodox Judaism throughout Israel are certainly a laudable legacy,  they do bring to the fore one of the central political issues that the Israeli government is wrestling with today.  The world Rabbi Lau describes of 24-6 yeshiva study and stringent observance of halacha is devoid of any discussion of how any of the people Rabbi Lau enountered earned a living or contributed to the material side of Israeli society, other than through teaching Torah.  As this army of yeshiva-educated students swelled in Israel, the state became increasingly challenged by the question of how to ensure that these students could provide for themselves and contribute to Israeli society with their total lack of exposure to non-religious educational pursuits.  This question emerged in Israel's most recent election as one of the more pressing questions that Israel faces.

Another issue that I should point out (given the content and types of articles that I have regularly included here) is Rabbi Lau's attitude towards women.  Of course, there is little written about this topic in this work but that in itself speaks volumes.  Very few women are mentioned in this book and even fewer are discussed in any detail.  Certainly Rabbi Lau's mother played an enormous role in his life and made decisions that likely saved his life.  But Rabbi Lau seems much more dedicated to preserving the rabbinical legacy of his father, whose works are mentioned and discussed repeatedly throughout the book.  Later, Rabbi Lau's journey to find a spouse seems much more of an effort to find the appropriate rabbinical family with whom he could build an alliance rather than any focus on the character, personality or qualities of his future wife.  Indeed, Rabbi Lau's father-in-law, Rabbi Yitzhak Yedidya Frankel, seems to play the role of the father figure that Rabbi Lau lost so early on in his life.  There is far more discussion of Rabbi Frankel and the role he played in Rabbi Lau's life than of Rabbi Lau's wife or any role she may have played.

In a sense, it is difficult to criticize Rabbi Lau for this since this is the lifestyle, culture and tradition in the very observant Orthodox community.  But in Israel, a society in which so many women (including many observant women) were playing active roles as politicians, professionals, activists and army personnel in other communities, Rabbi Lau's world, viewed through the lens of his book, seems to be one in which the only role women play is the role of arranged spouse and mother.  While I do not doubt the contribution so many of these women have made to Jewish continuity and to their families, I could not help but consider whether this model of society, if had been dominant, would have even permitted Israel to become established, let alone to flourish.  Is a pre-medieval social structure really a viable and  appropriate way to structure a 21st century society?  Even with Rabbi Lau's great success in becoming Israel's chief rabbi, I was left with many difficult questions after reading this memoir of his life.

Rabbi Lau's life is an incredible story of the unlikely journey from Holocaust survivor to Chief Rabbi.  This book provides great insights into the world of yeshiva learning in Israel and the world views of Israel's very observant and ultra-orthodox communities.  It also leaves the reader with a great number of thought provoking questions and challenges, many of which are probably unanswerable.

Posted by Ranana Reveller at 6:45 AM No comments: 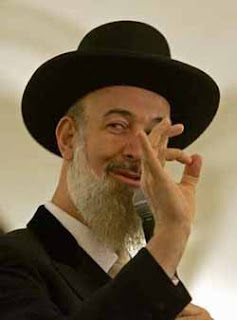