The Hina Party - Yemenite and Moroccan

Engaged Jewish couples originating from Arab countries have the custom of holding "Hina" (Henna) celebrations about a week before their wedding.  Up until yesterday, I had only been to the Yemenite version of these parties (as some of you may know, I was a very important participant at one of them...) but I can now say that I have also attended a Moroccan Hina.  To be more accurate, the Hina I recently attended was a mixture of a Moroccan and Yemenite Hina, though on balance it was closer to the Moroccan version.  I thought I would write a bit about these celebrations.

In both cases, the focal point is the Hina, a cosmetic paint derived from the henna plant.  I recently learned that the custom may date back to the Biblical book, Shir Ha-Shirim, the Song of Solomon:

In both cases, members of the family put some henna on the bride's and groom's hands.  Different commentators have suggested that the custom may relate to good luck, fertility, protection for the couple or may provide other special benefits.  In any case, the party is usually quite a festive occasion with lots of music, dancing and food, including many sweets.

One of the interesting traditions at many of the Yemenite Hina celebrations that take place in Israel is the custom of having the bride (and sometimes the groom) change outfits on a number of occasions during the course of the evening.  The different outfits are usually different bridal outfits that were worn in different regions of Yemen.  I have been to Hina celebrations where the bride has worn has many as 5 different outfits, though I think I have only seen the groom change once or twice.

The most famous outfit features a headpiece surrounded with flowers, usually red and white carnations, and adorned with silver jewellery.  The jewellery is usually handmade and is often heirloom jewellery that has been passed through the generations in the immediate or extended family.  The dress itself may be accented with gold.  There is often another outfit featuring a bright red hood, that is said to originate from the Sa'ana region of Yemen and a third outfit that is primarily black.  Here are some of the pictures that I have been able to dig up (but not from personal family celebrations):

At a Yemenite Hina, other family members will often dress up as well.  These days, there are professionals who supply all of the costumes, sometimes enough for 20 or 30 family members and close friends to dress up.  Often many of the aunts and cousins, dressed in traditional garb, will carry baskets on their heads with henna and lit candles, while singing (ululating) and dancing.  The highlight of the event is the placing of henna dye on the hands of the bride and groom.  At many Yemenite Hinas, the guests are invited one by one to come up to the couple and say a few words of blessing before placing some henna on the hands of the bride and groom (and themselves).  There is often a band with a singer performing traditional Yemenite melodies while many of the guests dance some of the well known folk dances.  Though I have had a number of opportunties to learn these dances, I am still trying to master them.  Let's just say dancing is not my forte. 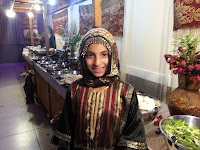 As I mentioned, other family members will sometimes dress up as well, like this 10 year old girl pictured on the right...(some of you might recognize her...)

The featured food can include Yemenite delicacies like Malawach, Jachnun, Sabaya, Kubana and many sweet desserts.  I'm not going to write about each of these foods at this point...

I should mention that if you happen to be invited to one of these affairs, the expected gift is some type of present, not necessarily cash itself, which will, of course, be the anticipated gift at the forthcoming wedding celebration...

As with a Yemenite Hina, the bride will usually change outfits at least once or twice.  The outfits are not quite as ostentatious but are probably somewhat less conservative.  At the recent Hina I attended, the groom wore a traditional white outfit, while the bride wore a beautiful white dress and then an outfit that featured red, primarily.  The groom's outfit featured a classic Moroccan fez.  One of the bride's outfits featured a completely open back, something that one would not be likely to see at a Yemenite Hina.

At the Moroccan Hina, the henna is mixed with equal fervour by a carefully selected family friend or relative.  Special family members, usually either the mother or grandmother of the bride, place the henna dye on the bride's and groom's hands.  Gifts are usually exchanged with the family of the groom providing the bride with a special piece of jewellery, often a necklace or earings or even both.  The family of the bride may give the groom a new watch or other item.

The bride and groom are brought into the room with great fanfare on a set of velvet covered throne style seats, pushed along with a chain of traditonally garbed family members following behind.  Like at a Yemenite Hina, there is plenty of traditional music, food and dancing.  At the affair I attended, the Hina component itself was more limited than at a Yemenite Hina, since only the immediate family members placed henna on their hands. But the occasion was an equally festive celebration of a pending wedding. 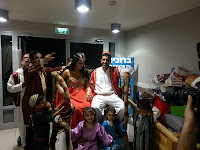 Whether the Hina party is Yemenite, Moroccon or of some other origin, it is bound to be a joyous occasion marked by traditional music and dancing, lots of food and maybe even some alcohol.  In some ways, it is almost an opportunity for the bride and groom to celebrate their wedding twice, in a short time span.
Posted by Ranana Reveller at 7:48 PM