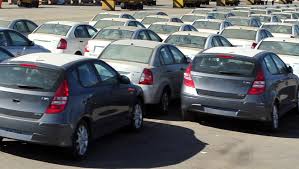 Buying a used car anywhere is challenging.  You never really know what you are getting.  Are you just buying someone else's problems?  It is always a risky venture.

That's no different in Israel.  But there are several advantages and disadvantages here that should be taken into account as well as some unique issues.

For starters, cost is a huge factor in any car purchase in Israel.  The price of automobiles in Israel is simply astronomical.  It is mostly taxes - which bring the price of a new car to 2.5 to 3 times the cost of the same car in a place like Canada.  So a new car - a relatively small one by Canadian standards like a Toyota Corolla or a Honda Civic - can cost more than $40,000 Cdn in Israel for a fairly basic model.  Ouch.

New immigrants to Israel are entitled to bring a new car with them at a reduced tax rate or they can use their "new immigrant privileges" to buy a new car in Israel at a reduced rate.  However, even with the reduction, the prices are still incredibly high, compared to North American costs.

Another option is to consider a used vehicle.  Sure that is quite risky - but anyone living in Israel to begin with is not necessarily averse to risk...

We recently set out to find a used vehicle and it was quite an adventure.  We will probably only know after several months, or even years, if we made a good decision.  If it is any consolation, our local mechanic tells us that the car should be maintenance free for at least the next 15,000 km.

How do you find that "diamond in the rough?"  Well, there are several good Israeli sites with large used car inventories, that change every day.  yad2.co.il is one example (translated as "2ndhand").  "winwin.co.il" is another one.  (It goes without saying that everyone wins in Israel in a used car purchase situation...)

These sites generally include a mixture of private sellers and used car companies.  There are rental car and leasing companies selling cars and smaller private dealers.  There are also a few huge financing/sales companies that have offices across the country.  Many of the small used car companies disguise themselves as private sellers to try and avoid some of the initial stigma of a used car lot.  You do need to know Hebrew to use these sites though they are fairly user friendly with drop down menus to help narrow your search.

Of course, as with any car purchase, it is important to set a budget, figure out what cars are in the set range and then try to narrow it down.  There are hundreds of types of cars available in Israel.  Japanese, Korean, European, American and others.  The choices can be overwhelming.  Many are vehicles that you just don't hear about in North America.  Renault, Peugeot, Skoda, Dihatsu.  Then there are the Korean cars - Hyundai (spelled out as Yundai in Hebrew) and Kia - the Japanese cars (lots of Mazda and Toyota, some Suzuki, Honda and Nissan), German cars (VW, Audi, BMW) and many Fords....As in many other parts of the world, Toyota, Honda and Mazda, as well as the German cars are viewed by many as the more reliable vehicles.

Weather is also a big factor.  Since the weather here is so much easier on cars than the snowy winters of Canada and the northern U.S., cars can last quite a long time.

So we set out to look for a used Japanese car.  How do you describe a vehicle in Israel with about 100,000 km on it?  Generally - either "like new," "completely new" or in "perfect condition."  After some brief phone conversations, we went to look at a few of these "new, perfectly maintained cars."

One had several dents and looked like it had been in at least two accidents.  The seller had described it as in "completely new" condition - with only 98,000 km on it....okay....

We found another one that looked like a great deal.  It had about 95,000 km but really did look like it was in fairly great shape.  So we decided to arrange a licensed test of the vehicle.  Given that there are so many used car sales across the country, entrepreneurs have made things fairly easy for consumers.  You can take the car to "Computest" or "Supertest" and get the "complete buyer's test."  There are other companies as well.  These companies will run a battery of tests, top to bottom on the car including several computerized tests of all of the car's different systems.  You then get a complete booklet of all of the car's attributes and defects.

So we hooked up the new-looking car....

Turns out it had been in two major accidents.  It had been repainted and much of the car had been rebuilt with third party parts.  Out of 19 systems tested, the car only passed 7.  Yikes.  That was an expense of about $140 that saved us thousands....

Back to the drawing board.

We went to see another car described as "like new."   It could only be described (by us anyways) as "beaten up."  We didn't even bother discussing a test.

Another "new"car was shown to us by its proud owner.  It had three or four visible signs of damage.  But the owner told us that he left the damage as is so that no one would think he had "covered up anything."  It looked reasonably good mechanically - the owner had a detailed service record booklet and was very proud of his maintenance efforts.  But repairing the various dents and getting a paint job would run about 5,000 N.I.S., assuming that everything else was perfect.

Needless to say, you definitely have to be prepared to kiss a lot of frogs to find the princess here.  Or, at least, to avoid finding the hidden ogre.

In one case, we spoke to the "owner" about a car that had a massive lien on it.  The owner wanted us to pay him first - then he would pay the lien holder - and once they released the lien (which could take up to 40 days, according to one Israeli site), he would then transfer the ownership.  I don't think so.  Remember that many people in Israel have negative bank balances.  So as soon as you pay the person, any money deposited would first go into the person's account to pay off the negative balance.  Who knows if the lien would ever get removed?...

So we kept looking.  We found two or three more options that look reasonable and started to look seriously at the transfer process.

The actual process of buying the vehicle (if and when you find one that is suitable) is reasonably easy.  You go to any post office with the seller.  The post office charges a fee of about 250 N.I.S. ($85) and checks to make sure that there are no liens or charges against the vehicle.  If everything is clear, the post office will provide ownership documentation instantly.

The buyer and seller can prepare and sign a sales contract - including the vehicle number, engine number, respective ID #s for the buyer and seller and other details.  Once the money is exchanged and the ownership is registered - the only thing left to do is insure the vehicle.  I found a fairly straightforward boilerplate agreement on the internet and modified it slightly to make it suitable.

In Israel, all used cars are tested each year year and a passed test is a condition of the vehicle registration.  The total annual fee can be about 1400 N.I.S.  So buying a car that has recently been tested can mean quite a savings, of up to a year's worth of test fees.

For calculating the market value of the car, Israel uses two types of "price books" ("Mehiron") to set the value of cars when Israelis buy or sell them.  Many sellers will stick to the Mehiron price religiously.  There is certainly some room, depending on the number of kilometres on the vehicle and the condition - but the Mehiron is often a basis for negotiating.

So we actually found another one that looked like a reasonable deal.  It was about 45 minutes away.  The owners seemed like a decent couple....After a test drive and a visual inspection, it was back to another computerized test location.

This car fared much better.  A handful of repairs were needed with an estimated cost of about 2,000-2,500 N.I.S.  But the owners were willing to knock that off of the already reduced, agreed upon selling price.  So we decided it would be worth the risk.

We took the car to a local mechanic who confirmed that the cost would be close to the estimate.  These were mostly more in the range of maintenance issues than major problems of any kind.  But of course the brakes, rotors and pads, would all need to be changed....With a few other optional items that would need to be done soon, the initial mechanic's bill ran up a bit higher than anticipated, but still in the ballpark.  Supposedly, we wound up with a car in very good shape mechanically and aesthetically, that should be fine for a while

We were able to insure the vehicle fairly easily by phone.  We contacted a few different insurance companies.  Unlike Canada/ U.S., they don't ask you how far you will be driving each day or whether you have passed a driver education course.  However, they do consider driving record (for the past 5 years), record of driving offences (if any) and whether there any new drivers.  Our agent also asked if anyone in the family was a teacher..(this included near and distant relatives).  We came with up a family member's name and were able to get a 20% discount.  No details required....

Buyers may prefer to buy from a used car dealership which might include some type of warranty. But based on some examples we saw, the cost differential could be quite significant - perhaps 20% or 30% or even more.  And I am not really convinced that these dealerships are likely to be any more scrupulous than a private seller.

But buyers will always want to take any car to one of these testing places for a comprehensive test - and perhaps also to a mechanic, since the testing agencies do not open and check the brake systems.  Of course some sellers may have a full service book and one could check what services were last performed and when.  But you still need to check these things.

Buyers will also want to be extra careful about title to the vehicle and will want to ensure that they are buying the vehicle free and clear.  Although the post office will cover most of these checks, it is not fully comprehensive.  You can go the Ministry of Transportation to verify that the vehicle is free and clear of any liens or other encumbrances.

While buying a used car in Israel is clearly a shark's world,  companies like Computest and Supertest help remove some of the risk.  Ultimately, you can never remove all of the risk - but it is probably worthwhile taking a chance if you can get a good used vehicle for a price that is drastically reduced over the price of a new or almost new model of the same car.  Then again, I suppose I will have to report back in about two years on whether I still believe that to be the case.

The vehicle model, year, price and kilometre reading have been purposely withheld to protect the innocent....

Until the next update on this issue - happy motoring!

Posted by Ranana Reveller at 11:38 AM No comments: