Legal Systems and Religious Minorities - Review of a Conference in Israel

I had the privilege of attending a conference today at the Open University of Israel in Ra'anana.  The conference topic was "Legal Systems and their Approach to Religious Minorities."  This was of particular interest to me as it is the issue I was looking at as I completed my L.L.M. recently - and it is also related to the topic I'll be speaking about at a Law Society conference in Toronto next week.  The conference was chaired by Professor Bat-Zion Eraqi Korman, the Director of the Center for the Study of Jews, Christians and Muslims.  It was also described as an appropriate way to mark a milestone birthday of Lord Harry Woolf, the outgoing Chancellor of the Open University, the former Lord Chief Justice of England and Wales and the first speaker at the conference.

Lord Woolf led off the conference with a discussion of the importance of the "Rule of Law" in a democratic society.  He highlighted the importance of the British and Commonwealth contributions to the concept, which, in his view, includes protection for the basic rights of all citizens, an independent court system, independent judiciary, and the protection of the rights set out in the U.N.'s Declaration of Human Rights.  Lord Woolf also spoke about access to justice, a key component of  a Rule of Law society, and one which he has fought vigorously to advance in the U.K.  Lord Woolf only touched briefly on some of the contentious issue, but suggested that there will be interesting, vigorous debate in the near future as the U.K. wrestles with issues of assisted suicide for terminally ill patients and the issue of same-sex marriage (as opposed to same sex "unions" or "partnerships.").

Next up was one of Israel's most respected jurists, Professor Aharon Barak.  Professor Barak, now a 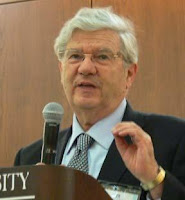 At this afternoon's lecture, Professor Barak discussed the topic "Israel as a Jewish and Democratic State."  He advanced a liberal notion of Zionism, which emphasizes the concept of Israel as a national homeland for the Jewish people, but also incorporates the notion of Israel as a demacratic state - a nation governed by the Rule of Law in which all of its citizens, Jewish, Muslims, Christians and others are treated equally.  Barak cited the idea of universalist halachic ideas that could be viewed as part of Jewish values including the prescription to "love your neighbour as yourself" and "do that which is honest and good."  His discussion was thought provoking, though he encountered some challenges in trying to defend the lack of separation between Church and State (Synagogue and State, in Israel).  He noted that he would not countenance such a separation and did not think it was necessary for the preservation of Israel as a democratic state.  It seems to me that there may well be a number of members of the Yeish Atid party who would beg to differ and perhaps, justifiably so.  It remains to be seen how far the current government will go in breaking down some of these walls or, perhaps, putting up some new walls.

Professor Barak also wrestled, perhaps somewhat uncomfortably, with the issue of the Law of Return, though I thought he explained it admirably as a form of affirmative action, designed to ensure that Israel continues to be a safe haven and home for the Jewish people, even as the country offers and should offer full equality within its boundaries for all of its citizens.

The third speaker, and unquestionably the most animated and controversial of the afternoon was
Professor Michael Karayanni, who provided an Israeli-Arab perspective on the issues of multi-culturalism in Israel.  He offered the thesis that Judaism is, essentially, the state religion of Israel.  (This led to some subequent vigorous exchanges between Karayanni and Barak).  Moreover, he argued that the courts have, at times, taken "liberal" approaches when challenging Jewish Orthodoxy, on behalf of other Jews, but have ceded great swaths of legal territory to minority religious institutions as group rights.  The result has been that members of minority religious groups are subject to illiberal domination of certain spheres of life by religious institutions which have been ceded to them by the Isaeli legal system under the auspices of empowering minorities.

Professor Karayanni's attack on the manner in which the laws of marriage and divorce are regulated by religious authorities in Israel is hard to refute.  The notion that all Israelis, regardless of whether they happen to be Jewish, Christian, Muslim or atheist, should be required to submit to religious authority for the determination of any personal status issues is anethema to the rule of law.  But Professor Karayanni also attacked the unfairness of the Law of Return, from an Israeli Arab perspective.  While he is correct  in observing that the Law of Return means that all citizens of Israel are not treated the same - he overlooks the notion of the Law of Return as a type of justifiable affirmative action program as explained by Professor Barak.  Admittedly, he would argue that he was being descriptive rather than normative but his arguments seemed to veer over to the prescriptive rather than descriptive side.

Finding a way to reconcile the idea of Israel as a Jewish State with the notion of Israel as a democratic state is one of the key challenges that Israel faces.  Over the past number of years, the power of the Rabbinate has increased and legislative changes have tilted the country towards a heightened Jewish character, sometimes at the expense of the latter concept.  It remains to be seen whether the current government will begin to tilt the playing field back in the opposite direction.  Early indications which include a decision, announced today, to provide state funding to non-Orthodox rabbis as well as Orthodox, suggest that there is hope that the notion of Israel as a democracy will be strengthened by this government, if some of its ministers have their way.

The centrality of this issue in Israel is what made today's conference so relevant and interesting.

Posted by Ranana Reveller at 10:11 PM No comments:

There have been a number of exciting developments in the fight for religious pluralism and equality at the Kotel in Israel.  This may signify the start of significant change in Israeli society in the way in which religious affairs are administered.  For many Israelis and Jews around the world, these changes would be very welcome and long overdue.

One major event was an historic, precedent setting court ruling in April.  A number of women were arrested for "disturbing the peace" for wearing tallitoth (prayer shawls) and tefillin (phylacteries) in the women's section of the Kotel in April, 2013.  Arrests like this had been commonplace for the past few years, with the police generally carrying what they viewed to be their interpretation of an Israeli Supreme Court ruling from a number of years earlier.  However, on this occasion, the Israeli court held that there was no basis for charging women with "disturbing the peace" for praying out load in the women's section of the Kotel while wearing tallithoth and tefillin.  This New York Times article discusses the court ruling.

The result of that court ruling was a planned, large scale Rosh Hodesh service in the women's section for this past Friday (May 10, 2013).  Knowing that the police would no longer be arresting women for "disturbing the peace" when holding a prayer service, various Haredi leaders publicly called for their followers to show up at the Kotel and protest the women's prayer service.  The result was a violent clash in which Haredi women and men threw garbage, water and other objects at the women as they prayed.  Israeli on-line news source YNet covered the story here. Three ultra-Orthodox students were arrested and the police, for the first time in years, actually protected the women rather than the Haredi demonstrators.  Finally, those who were really disturbing the peace were the ones arrested.

This story comes on the heels of various announcements indicating that the Israeli government is close to a deal that  will see the Kotel expanded to include a section for mixed prayer (men and women together).  The Kotel now only includes separate sections and women are currently not permitted to bring a Torah scroll to the women's sided.  Natan Sharansky, chairman of the Jewish Agency and the person charged with coming up with a solution to this issue, has said that the first stage of his Kotel renovation project could be completed within 10 months.  This will be a tremendous move towards accommodating different types of religious practises in Israel and may will signify a change in attitude in Israel towards non-Orthodox Jewish religious groups and movements.

Religious pluralism is an issue that is important to Minister Yair Lapid, who holds significant power in the current coalition government.  So it is not a huge surprise that some things are beginning to change.

Even among many Masorti Jews, there are differences of opinion about how the Kotel should be administered.  At our shul, a fully egalitarian Conservative congregation, we had quite a heated debate a few weeks ago over the issue of whether the Israeli government should impose a pluralistic solution at the Kotel itself.  I personally see no reason why we could not divide the Kotel into three instead of two, with "his, hers and ours" sections.  This would be a compromise that should be equally unsatisfactory for almost everyone - the hallmark of a good compromise.

Some argued that since this is such a holy site, it should be administered in ultra-orthodox fashion.  This makes little sense to me.  The Kotel is not a small ultra-orthodox shul.  It is a signficant, symbolic, national-historic religious site.  It should be accessible to all.  The notion that women could be arrested for "disturbing the peace" for wearing a Tallith or for singing out loud in the women's section at the Kotel is just plain ridiculous.  Similarly, the notion that Conservative or Reform groups cannot hold prayer services at the Kotel is also wrong-headed and too exclusionary.

But Israel now seems headed in a different directon on this issue and that may signify upcoming changes in other areas of religious pluralism in Israel.  Stay tuned as this is certain to create lots of controversy.

Posted by Ranana Reveller at 10:01 AM No comments: