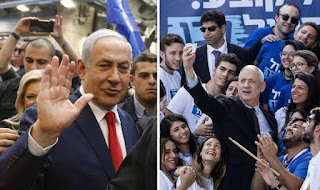 The second Israeli national election of 2019 is due to take place on September 17, 2019.  Since I haven't been writing as much lately, I thought I was overdue to put together some comments about the upcoming election.  In the past I have reviewed the platforms of the various parties and provided some comments.  In this post, I thought I would try to look at some realistic possible outcomes, based on current polling numbers and consider what Israel might face following the elections.  This is certainly not "Torah mi-Sinai," as I have been very wrong in the past when trying to predict Israeli political outcomes.

I figure that there are about 4 or 5 realistic possible outcomes and I will consider them and the implications of these outcomes.

At this point, with about 11 days to go until the election, I would have to think that this is the most likely outcome.  The Likud party, led by Prime Minister Netanyahu, needs to assemble a coalition of 61 seats to have a majority in the Israeli Knesset and form the government.  Following the previous election, Netanyahu was able to string together up to 60 but not quite enough to form a government.  Once it became clear  that he was unable to form the government, Israeli customary practice would have normally seen the President ask the next party in line (Blue and White) to try to form the government.  But Netanyahu preempted this step and brought a bill to the Knesset to dissolve the Knesset and set another election date.

So there are now at least two different ways, perhaps even three that the Likud could form a government.

One possibility would be if the Likud and its coalition partners obtain 61 seats or more.

Current polling from a whole range of different Israeli polls estimates Likud at between 30 and 32 seats, a drop of 6-8 seats.  The two ultra-religious parties, Shas and UTJ are estimated at 8 each, with no change.  The Yamina party, which is a coalition of a number of right wing nationalist parties, replacing Bennett's previous party, and now led by Ayelet Shaked, is polling at between 8 and 10 seats.  So add all of that up, at the high end and you come up with about 58 seats.  If Likud were to pick up 3 more, by itself or if any of its coalition partners were to add seats, Likud could get to a 61 seat coalition without Lieberman.

Following the last elections, Likud was unable to come up with a coalition deal that would have satisfied the ultra-religious parties and the secular nationalist Yisrael Beitenu party.  Neither Lieberman nor the ultra-religious were willing to make sufficient compromises, particularly on the issue of drafting ultra-religious men to the army.

While it is true that Lieberman seems to  have gained significant public support by demonstrating a willingness to stand up to the ultra-orthodox, his party otherwise shares many of Likud's political positions.  His party is willing to support a retroactive immunity bill that would get Netanyahu out of his various legal troubles.  This would also help other coalition partners who are under investigation.  Lieberman is also willing to support the "attack on the Supreme Court" bill (my description) that would give the Knesset the power to override any decision of the Supreme Court by a simple majority.  This is an important bill for Netanyahu since he knows that the retroactive immunity bill would probably be struck down otherwise as a violation of the principles of fundamental justice.

Lieberman's support for these bills would be life-saving for Netanyahu since it would end all of his legal problems.  Lieberman is certainly not a pushover but Netanyahu desperately needs these pieces of legislation to avoid the possibility of winding up in jail.  I think that there is strong likelihood that Netanyahu and Lieberman will negotiate some kind of deal if Likud cannot otherwise get to 61.

A third possibility for a Likud win is some other type of coalition without Lieberman.  Suppose that Likud and his coalition partners wound up with 57-60 without Lieberman.  They would need to find 1-4 additional supporters from elsewhere.  One possibility is to convince a few right-leaning Blue and White party members to join a Likud coalition, perhaps in exchange for cabinet posts other other attractive offers.  Or perhaps some Labor members or members of the Democratic Union might be willing to make a deal.  I think that these are relatively unlikely scenarios.  I find it hard to see that some Blue and White Knesset members or members of the other parties would agree to the retroactive immunity bill and the court bill to protect Netanyahu.  And that seems to be the number one priority for Likud and Netanyahu.  That being said, in Israel there are always surprises and there is a great deal of horse trading (to put it nicely).  So I don't think that this possibility can be ruled out entirely.

This is probably the second most likely possibility after some type of Likud victory.  If Lieberman holds steady and refuses to make a deal that will allow Netanyahu to continue to govern and if no other Knesset members from other parties are willing to defect and join Likud - Israel could see a third consecutive election.  With the holidays and other timing issues, this would likely mean a January or February election.  This could be a big problem for Netanyahu.  If his criminal trial moves ahead and he has not been able to enact an immunity bill to make everything go away, he could be forced to step down at some point to defend against the charges.  This could change the Israeli political landscape quite a bit.  To me, it underscores the urgency of a deal for Netanyahu - with Lieberman or anyone else - at all costs (from Netanyahu's perspective).

Many people in Israel have discussed this option but I don't believe it is very likely at this point.

On the one hand, if Likud were to have the plurality of seats, Netanyahu would be looking to retain his role as Prime Minister and pass the two bills that his party has been pushing to protect himself.  I find it hard to see how the Blue and White party could agree to a retroactive immunity bill or even the Supreme Court bill.  Blue and White might be willing to agree  to have Netanyahu continue to govern - without these pieces of legislation.  In this case, he would face the possibility of having to resign at some point as the prosecution progressed.  I don't think Netanyahu would agree to a deal without immunity.

If Blue and White were to win a plurality of seats, they could ask Likud to join a national unity government, with or without Netanyahu - with no immunity bill. Again, this seems quite unlikely to me since the Likud members have shown a willingness to continue to support Netanyahu irrespective of the challenges that he faces.

The landscape would only change if the Blue and White party came out ahead of Likud by 5-6 seats or more and Likud realized that it simply could not get to 61.  In this scenario, Netanyahu would, at some point, be forced to resign and face charges while the rest of the Likud party made a deal with Blue and White.  This seems highly unlikely to me for several reasons.  For one, I don't think that Blue and and White is about to get such a big win at the polls.  They don't really seem to have the momentum and don't seem likely to finish ahead of Likud by 5-8 seats.  Anything is possible but I am not predicting that outcome.

I also think that it is unlikely that so many Likud members would suddenly turn on Netanyahu after so many years of benefiting from his  leadership.  And I believe that with so much at stake, Netanyahu will pull out all the stops to cut a deal with someone to get the immunity bill and stay in power if there is any possible way of doing so.

While this is a theoretical possibility, I don't see how the numbers add up.   With a coalition of Blue and White, Labor, the Democratic Union (formerly Meretz) and even Lieberman, the total would come to 50-55.  I suppose that there is a chance that Blue and White could convince the ultra-religious parties to join a coalition - but that would put Blue and White into the same difficulty that Likud has faced - balancing Ultra-religious demands with those of Lieberman (and now the Democratic Union).  This would really require some creative deal-making on the part of Ganz and the Blue and White party.  It is possible that they could get the chance to try if none of the other possibilities reviewed above lead to a government.  Overall, I see this as unlikely but not impossible.

These different possibilities are all based on a review of current projected polling numbers combined with my own gut sense of where things are headed.  But election polling can be off quite dramatically and the numbers may be very different from those in the polls.  Likud could wind up at 37-40 seats, supported by many Israelis who don't really want to tell pollsters that they are voting Likud.  However, these seats would probably come from Yamina (or maybe Blue and White) so it is not clear that even with 38-40, Netanyahu would be able to get to a coalition of 61 without Lieberman.

Watching election results in Israel is very different from watching in Canada or the United States.  The actual polling station reports don't seem to turn up on a regular ongoing basis in the same way.  Instead, the media reports on "exit polling" numbers and uses those reports to predict the election outcome.  But the real results are usually not determined until the next morning - or perhaps even a few days later.  So whereas in Canada or the U.S., most elections are usually decided by 10 p.m. or 11 p.m., the latest, that is not the case in Israel.  We will probably only have a decent sense of the actual numbers by 10 or 11 a.m. Israel time on September 18th, 2019 (3 a.m. on the east coast for those in North America who plan to stay up and wait for the news...).

Even once the actual numbers are known, that will only really mark the start of coalition talks which are almost guaranteed to take a month or two.  So stay tuned for a wild and crazy ride.  It is almost certain that Israelis and Jews around the world will find themselves fasting on Yom Kippur without knowing what kind of government Israel will have for the coming years.  As for  Netanyahu, he may find himself fasting while hoping that he can continue to blow his own Shofar and that any negative decrees (from above, from the Israeli public or from the Israeli courts) can be averted.

Posted by Ranana Reveller at 1:18 PM No comments: