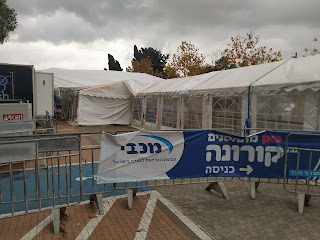 Welcome to 2021.  In some places it is far from clear that we have turned a "new leaf" or left 2020 behind.  Given the recent political events in the U.S., the various Covid-19 mutations, the overburdened hospitals in so many places around the world, many people are wondering how to use the restart  button for this year.   Ctrl-alt-del doesn't seem to be working.

Here in Israel, we have begun the new Gregorian year with a mixture of political and health challenges, but also with a substantial measure of optimism.

On the one hand, the spread of Covid-19 has hit record highs, reaching up to 10,000 new cases a day last week and early this week.  Since the case load has been quite high for a while now, this is meant an increasingly high number of  Covid deaths, which tend to spike about 2 to 3 weeks after people are infected.  Numbers have reached 40-50 deaths a day, which is quite high for a country of only 9 million people.

As a result of the growing numbers, Israel has instituted a third "shut down."  Once again, most workplaces are closed, other than those deemed essential.  Synagogues and other houses of worship are limited to 5 people inside with up to 10 outside.  Restaurants are offering delivery but are not supposed to be allowing "take-out" service.  Some places, like falafel shops, are allowing you to call from inside the drug store next door and ask to have your food delivered there.  This is apparently within the guidelines... Malls are closed, although the grocery stores, liquor stores, drug stores and  stores in a few other categories are still open.

Government experts estimate that it may take 2-3 weeks to see the results of this lockdown.  This is the first lockdown in which Israel has now begun to insist that passengers leaving the country or arriving must be tested.  Up until now, surprisingly, this was not the case.

So we have roadblocks set up across the  country where police are stopping drivers and asking people where they are off to.  If your reason for travelling is not on the acceptable list, you can be fined 500 shekels (about $200 Cdn).  Permissible reasons for being out include grocery shopping (within a kilometre of your  home), drug store, getting vaccinated, getting tested for Covid-19, helping an elderly parent or grandparent and many others.  This has provided a great deal of fodder for Israeli comedy shows with parody skits of these interactions between police officers and people trying to come up with excuses quickly enough to avoid a fine.

Sometimes, as with so many other things, real life examples are sufficient comedic material themselves.  For example, a young Israeli was stopped earlier this week and told the officer that he was visiting his grandmother.  The officer asked for the name and plugged the name into a database.  Unfortunately, the grandmother had been dead for more than 2 years.  Nice try but that is definitely a fine!

Some people have decided to take their chances and disregard the rules entirely.  Police broke up a house party last week with more than 100 guests.  They were all fined 500 Shekels each and the owner was  fined 5,000.  But I understand that this is the case all around the world.  In fact, I would say that, for the most part, people in Israel are wearing masks when out, keeping distances in lines in supermarkets and  generally conscious of trying to follow the rules, or most of them.  Or some of them.

On the optimistic side, Israel has been a world leader in obtaining vaccines and rolling them out.  Israel has purchased significant quantities of vaccines from both Pfizer and Moderna, though far more from Pfizer.  Apparently, Israel offered to pay Pfizer significantly more per vaccine than the retail value, perhaps as much as three times the price.   Together with this agreement, Israel also signed a deal to provide Pfizer with information about the results of the vaccines, supposedly on a no-names basis. The exact terms of the deal have not been publicized.

The bottom line is that Israel began vaccinating its population en masse in late December.  For the most part, it has been quite orderly.  Vaccination stations were set up all around the country with big tents.  Appointments were available by phone, app, or web site.  At first, front line health  workers were vaccinated, followed by all those over 65 or people over 60 who were high risk.   Soon afterwards, the age was lowered to 60 officially (55 unofficially in many places).

During this time period, Facebook and Whatsapp groups sprung up to help Israelis find vaccination sites.  There are a number of groups like "Vaccinations Between Friends" on  Whatsapp where Israelis who aren't in the current vaccination group can get information about which sites have "extras" on particular days so that they can show up and get in line.  Tens of thousands of Israelis have managed to get vaccinated this way.

The country's medical system quickly ramped up the vaccination rate to 150,000 to 200,000 a day.  According to recent estimates, more than 2 million people in Israel (including yours truly) have received their first dose.  Yesterday marked the start of the rollout of second doses.  At the same time, the qualifying age was lowered to 50, with talk that it will be reduced to 45 by early next week.

Many people who have received the second dose are reporting various symptoms that last for several hours or even  a day or two.  But for the most part, more serious reactions have been quite limited.  It remains to be  seen whether the rollout of the vaccine will dramatically change the pandemic situation here as expected and if so, how quickly.  The Israeli government has indicated that all citizens who wish to be vaccinated will be able to get the vaccine by the end of March (both doses).  Earlier this week, one Cabinet minister clarified that they meant everyone would have the first dose by the end of March and the second dose by late April, 2021.

Israeli medical experts have reported that the vaccine provides significant protection starting at 14 days after the first dose, reducing the possibility of infection by more than 50%.  Both Pfizer and Moderna have estimated a success rate of more than 95% after the second dose.  I guess we will see shortly if these estimates are accurate.

The Israeli government has indicated that it is rolling out a plan to issue "Green Vaccination Photo ID cards" that look like drivers licences or health care cards - for all Israelis who have received the vaccination. These cards will be provided approximately 7 days after the second dose.  Israelis with these Green cards will be able to fly outside the country, return to Israel from a trip without isolation, go to concerts, sports events, restaurants etc.,.  I'm waiting to see whether other countries will recognize or  honour these cards - assuming that they are actually provided as planned.

So the optimistic news in Israel is that with such an aggressive rollout of the vaccine, Israel may be able to rid itself of the pandemic by May or June, assuming that the vaccine actually works.   If this all goes as  anticipated, it will be very good news for other countries as well and the world may really be able to turn the corner by mid to late 2021.  As long as Pfizer and Moderna can keep up with the demand for vaccines.

I will save most of the Israeli election news for a later blog.  As you may know, we have an election scheduled for March 23, 2021, just days before Pesach (Passover).  Prime Minister Netanyahu is facing new challenges to his right and to his left although there still may be a consolidation of some of these parties between now and election day.   Candidates and political parties  actually have until early February to finalize their slates so it would be worthwhile to weigh in at that point once we see what the political landscape looks like.

Netanyahu's criminal trial is set to continue in early February 2021.  He is still hoping that he can get a 61 seat Knesset majority and pass a retroactive immunity bill to avoid facing these charges.

Interestingly, or perhaps there are other adverbs, Netanyahu has embarked on a program of visiting Arab Israeli cities and asking Arab Israelis to vote for his Likud party.  Apparently, he is willing to offer some goodies in exchange for support of his immunity bill.  Now this is somewhat surprising since Netanyahu has spent the past several years attacking Arab Israeli politicians and making every effort to exclude them from any coalition.  In fact, he has argued that any government that relies on Arab Israeli support for its majority would be illegitimate.  How ironic would it be if he were to rely on exactly this support to try and get a retroactive immunity bill passed?  In any event - more politics in future blogs.

On the entertainment site, as you might have heard, "Shtisel" has returned for a third season.  Israeli TV station Yes Drama (Channel 5) has been showing the episodes on Sunday nights at 9 p.m. Israel time and  they are also showing up on youtube  the next day, though without translations.  You might need a VPN to watch them.  We have been enjoying the show.  I think it has been 3  episodes so far - not sure how many there are in the series.  In case you haven't seen it, I believe that the first two seasons are still on Netflix.

Israel also has a variety of comedy shows that focus on political satire, especially impersonations of current politicians.  "Eretz Nehederet" ("A Wonderful Country") is one of these shows.  Many of its episodes are available on Youtube, some with subtitles.  It can be very funny, though it is hit or miss, much like Saturday Night Live.

Another show that has been increasing in popularity is called Zehu Zeh ("This is it").  The show is made up of a comedy troupe of five septuagenarians - who had a very popular comedy show back in the  70s.  They decided to get back  together and make a comeback which has included short satirical skits, impersonations and musical pieces.  I thought I would include a new release. Just last week they decided to put out an original song written by one of their colleagues and produced by a 30 something music  manager that they hired.

It is called "The Pizza in Your Heart" - written about the search for the perfect slice of pizza and what happens when you finally find it - or how disappointing it can be to realize that maybe the slice that you dreamt of is not what you were really looking for after all.  It's all very tongue in cheek.  Although the idea might sound a bit cheesy, I think it's quite  fun. (Sorry about that).

Meanwhile, we are getting  some nice rainy  weather over the next few days, so I will have to postpone barbecuing.  I can't complain because it is still close to 20c outside.  I was happy to watch the Toronto Maple Leafs'  season opener last night (even though it was on at about 2 a.m. local time).  It was an overtime win for the boys in blue.  And I'm looking forward to NFL playoff weekend, especially the chance to see the Buffalo Bills try to get their second playoff win in 25 years.  As a Toronto hockey fan, that sounds all too familiar.

Wishing everyone the best of health, Shabbat Shalom and a much improved 2021.

Posted by Ranana Reveller at 11:53 AM No comments: