The Israeli national ice hockey team has secured a spot in Division II, Group A for next year's IIHF World Ice Hockey Championship with a 13-2 win today over Bulgaria.  Israeli star Daniel Erlich led the way with 3 goals and 8 assists.  Oren Eizenman also had a hat trick with 5 assists and Daniel Mazour potted 4 goals and added 2 helpers.  The Israeli team scored early and often.  This game was never in doubt, with Israel scoring its first goal only a couple of minutes into the game.  The only "close" point in the game afterwards was when Bulgaria scored late in the second period to bring the score to 5-2.  After that, the Israelis went on an all out scoring spree and never looked back.

Israel has captured first place in the tournament with four wins and no losses.  It will play Mexico in the final game of the tournament on Saturday.  Even if Israel were to lose, the worst it could do at this point would be to finish tied with China or New Zealand, both of whom Israel has already defeated.  Israel would therefore advance on the basis of tie-breaker rules.  Division II Group A opponents will include Belgium, Iceland, Austria and Serbia.  Spain will move from Group A down into Group B to take Israel's spot.  Croatia will be moving up from Division II Group A to Division I Group B after winning the Group A round robin.  Great Britain, which played this year in Division I will move down and join Israel in Division II Group A.

Israel will now be ranked #34 in the world in international ice hockey.  With its move to the next division, it will be competing against teams ranked 29 to 34, with an opportunity to move up to the 3rd best division in the world.  This is a significant achievement for the Israeli national ice hockey program though it is unlikely that the players will be mobbed at the airport by adoring fans on their return from Turkey.

Posted by Ranana Reveller at 9:54 AM No comments:

The Israeli national ice hockey team had a great day today, scoring a 3-2 win over New Zealand at the IIHF World Hockey Championships in Izmit, Turkey.  Israel and New Zealand play in Division II, group B, which includes other hockey powerhouses Bulgaria, China, Mexico and Turkey.

After three games of round robin competition, Israel now sits in first place, undefeated so far.  They play Bulgaria tomorrow and Mexico on Saturday.  The winner of this tournament will move up to play in Division II, Group A at next year's IIHF tournament.

In another game today, Mexico defeated Bulgaria 8-7 in a shootout.  Mexico has one loss.  However, because it won in overtime today, it will not be able to catch Israel in the standings if Israel wins one of its two remaining games.  Only New Zealand is still a threat to Israel's first place position if Israel drops its two remaining games or  even if it loses one and ties one.    A win tomorrow against Bulgaria (which is winless so far) and Israel would be almost certain to win the tournament.

Prior to this year, the Israeli national team's best achievement was a trip to Divison I following a big win in 2005 in the Division II group A tournament.  They were quickly relegated back to Division II the following year.

Three of the tournament's five top scorers in this group so far are Israelis, including Daniel Erlich (of the University of Western Ontario), Oren Eizenman and Maxim Birbraer who are 2nd, 3rd and 4th respectively.

None of this is likely to make the headlines in Israel, which is obsessed with soccer and basketball and has little time for ice hockey.  Perhaps, if Israel actually wins the tournament, there will be some press coverage.

However, with the opening of the Israel's second major ice facility in Holon, there is a real opportunity for Israel to continue to develop its ice hockey program.  Aspiring Israeli ice hockey players will be able to train in the centre of the country and will not have to travel more than 150 km to Metullah for some ice time.

Even with more ice time in Holon, the Israeli ice hockey team is not likely to threaten Canada any time soon.   But a spot in group A of Division II would see Israel play against a group of higher calibre teams next year.  The real goal would be to try to win that tournament and secure a spot in Division I for the following year.  It will take some really shifty stickhandling for Israel to score a spot in that world class Division.

Posted by Ranana Reveller at 1:02 PM No comments:

2011 Ice Hockey in Israel at Metulla

Well the 2011-2012 ice hockey eason is underway in Metulla, Israel. As I've explained in earlier blog entries on this site, this is the northernmost point in Israel. From Ra'anana, the drive is 177 km, each way.

Nevertheless, every two weeks, the list is filled with 30 players and 2 goalies - most of whom drive at least 2 hours to come and play ice hockey. They come from Jerusalem, Ra'anana, Tel-Aviv, Modin and many other Israeli cities and towns.

The games are non-contact and are set up with three lines, divided by skill level. This is great for a guy like me. I get to play on the third line with the other shleppers (hacks). The first line is actually quite fast-paced hockey and is fun to watch. Some of the players played Junior hockey in Canada or U.S. College hockey so they are quite good. The 2nd line is in between. Sometimes it is faster than other times, depending on which players have shown up. The lines are changed up fairly evenly and everyone gets to play for about 1/3 of the 1 1/2 hour ice time slot. There are almost always two goalies with full equipment.

On the way to the game, I had to make my way through 1/2 hour or so of Ra'anana traffic, just to get onto the toll road (Route 6) (known as the Yitzhak Rabin Highway). The exit out of Ra'anana to Route 6 is really poorly designed and is especially crazy during rush hour. We had to leave at about 5:30 p.m. to get to the rink on time. Apparently, the traffic problem is being fixed with the development of a new highway next to Ra'anana, due to open over the next couple of years.

Once on the highway, the speed limit is 110 and there isn't too much traffic so you can make it up north reasonably quickly. In total, the drive to Metulla took about 2 1/2 hours. We made it to the area by about 7:50 p.m. - which gave us enough time to grab a coffee at Aroma at the shopping mall in Kiryat Shemona, the last "big town" before Metulla, about 10 km away.

Getting to play on the same line as my son is quite fun, though I have to say, he is becoming a much better hockey player than me. Nevertheless, I managed to score a goal...which is pretty rare.

Aside from these bi-weekly Thursday night games, the Israeli Hockey Association is running a tournament with the same rule set up from February 6 to 10, 2012. They have been doing this annually and attract players from all over the world. Players can come in teams or can come individually and be placed on teams. The tournament is designed to raise awareness of ice hockey in Israel and to encourage tourists to come and visit Israel, while spending a bit of time playing some hockey. Two years ago, legendary Canadian hockey player Paul Henderson dropped the puck at the opening game of the tournament.

For those who are planning to be in Israel at some point but cannot make the tournament, there are sometimes spots available for casual players who want to come out and play at one of the games on a Thursday night. In fact, the association even lends equipment to players who didn't manage to bring their full gear to Israel.

The Thursday night games are attended by a great group of guys (and sometimes a young woman or two). After the games some of the players go for a swim in the pool, which is part of the ice rink complex (fittingly named the "Canada Centre"). Others head to Kiryat Shemona to have a post-game Shawarma, usually at a small kosher take-out place called "Shlomi's Baguette."

The drive back to Ra'anana, without any traffic can take as little as about 1 1/2 hours, so we were able to make it back by about 1:30 a.m. With the cost of the ice time (about $45 per player) and the crazy prices of gas in Israel, this is a fairly expensive activity. But getting on to the ice for an hour and a half in Israel is really a great time, especially if you are a Canadian.
Posted by Ranana Reveller at 8:05 PM No comments: 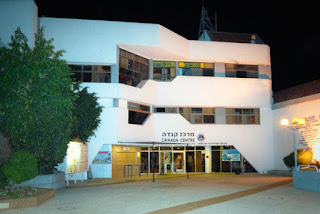