This is the 100th blog post that I have written on this site, which started in October 2010.  I have now added a Table of Contents page, which appears on the home page of the blog and which groups the various posts by categories.  At this point, the blog posts are divided into seven different types which are listed.  I may add one or two categories in the coming months.  I welcome suggestions.

In thinking about the number 100, I thought it might be interesting to look at what was happening 100 years ago in different places, including some Israeli areas. 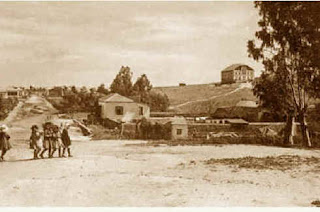 This is a picture of Rehovot, Israel in 1912 that was taken by a photographer named Leo Kahan, who was working for the Viennese Yiddishe Zeitung newspaper, according to the site Zionism-Israel.  Rehovot today has a population of more than 110,00 and is the home of the famed Weizman Insittute of Science.

Moving north and a bit closer to home, 1912 was significant for another future Israeli city.  The Company for Jewish Settlement in Israel formed the "Ahuza A – New York" group to purchase land in Israel for agricultural settlement.  The First World War delayed the plans of the group, which did not get started officially until 1922.  This group founded Ra'anana, which would eventually become a city of approximately 70,000, located north east of Tel-Aviv (and my current home...).  Ahuza Street is now the busiest street in the city, filled with stores, restaurants and other businesses.

Getting back to the "100"| theme, I thought I would mention that an Israeli football (soccer) team - Maccabi Petah Tikvah was founded in 1912 and is still operating today as Israel's second oldest football club.  I haven't been to see them play yet.  But since there are no hockey games to attend when I am in Toronto due to the NHL player lockout, maybe the sports budget should be spent on Israeli soccer games to kick up the nationalist sentiment.

I also note that Raoul Wallenberg, who saved the lives of tens of thousands of Jews during the Holocaust, was born in 1912.  This is quite relevant and timely, since many cities around the world, including Toronto, are commemorating Holocaust education and awareness week in November.  Wallenberg is being featured prominently this year at many Holocaust awareness events.

1912 was also an election year in the United States.  The presidential race was a rare four-way contest.  The incumbent was a Republican, President William Taft.  Former President Theodore Roosevelt ran under the banner of the Progressive Party after losing his bid to win the Republican nomination.  (That type of scenario may sound familiar to Israelis who see new parties created every time there is an election...which will be taking place in January 2013).  In the 1912 campaign in the U.S., the Socialist Party  candidate, Eugene Debs, picked up 6% of the vote.  But the winner and new president was Democrat Woodrow Wilson  who was actually only nominated as the Democratic Party candidate on the 46th ballot after an epic battle with William Jennings Bryan. Although it is highly unlikely that we will see a 46th ballot again any time soon, we may well see 46 recounts of the Ohio and Florida votes in Tuesday's upcoming presidential election in the U.S.

1912 was also the year of one of the first women's suffrage parades in the U.S.  It would be 8 more years until the U.S. Constitution would be amended and American women would be granted the right to vote under the Nineteenth Amendment.  Canadian women began voting in 1919, other than in the Province of Quebec which delayed this right until 1940.  In Israel, of course, women had the right to vote from the inception of the State in 1948.  As an aside, as I have written in one of my gender equality articles elsewhere in this blog, women at Beth Tikvah Synagogue in Toronto, Canada were granted the right to read from the Torah and come up for aliyot this year, in 2012, some 100 years after these suffrage parades in the U.S.  (I had to add that in, just to rile up a bit of controversy and spice up the blog...)

So those are my tie-ins to mark this 100th blog.    Oh wait - I should also add that the Titanic sunk in 1912, though I don't have any kind of tie in for that....  So for now I plan to continue writing these blogs and I hope you have enjoyed reading them (or at least some of them) and continue to do so.

Posted by Ranana Reveller at 11:42 PM