Jerusalem Day 2012 - In Jerusalem and Ra'anana 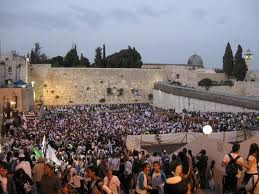 April and May are filled with various holidays and days of commemoration in Israel. Yesterday, Israel celebrated Yom Yerushalayim (Jerusalem Day), marking the 45th anniversary of the reunification of Jerusalem.

In many ways, Jerusalem is really the heart and centre of Israel and of the Zionist enterprise. The historical link of the Jewish people to the land of Israel is visible for all to see at the archaeological ruins at the heart of the Old City of Jerusalem. The epicentre of the story is the tunnels that have been excavated next to the Kotel (the Western Wall) where visitors can travel underground through history to see the multiple layers that have been built and rebuilt on the site where the two great temples once stood and the surrounding plaza area.

Today, the Dome of the Rock, the large golden domed mosque, which was built in 691 CE, some 620 years after the destruction of the second Temple, sits on exactly the spot where the Temple once stood. It is little wonder then that the Old City of Jerusalem is so hotly contested.

According the original U.N. partition plan in 1947, Jerusalem was to be an "International City" with full access to all to the religious sites that are holy to Jews, Muslims and Christians. During Israel's Independence War in 1948, Jordan gained control of much of Jerusalem and the Old City in particular, including the Western Wall, the Dome of the Rock and other sites that are holy to three of the world's major religions. Israel held the western half of Jerusalem, where the Israeli parliament (the "Knesset") was established. Jerusalem was named the capital of Israel though, to this day, only a few countries have recognized it as such. Most others have insisted in putting their embassies and consulates in Tel-Aviv.

Between 1948 and 1967, Jews were denied access to Jerusalem's Old City. Many of the religious sites were destroyed and desecrated. Ruins were removed. The city was divided with part held by Jordan and the other part held by Israel.

In June 1967, during the six-day war, Israel took control of the Old City of Jerusalem. The Israeli government later declared that it had annexed Jerusalem, reunited it and “liberated” the City. Jerusalem's holy sites are now open and accessible to all. The Dome of the Rock is managed by Muslim religious authorities and is fully accessible to Muslims. Similarly the Christian religious sites are open and accessible to all. Since 1967, Israel has excavated, restored and rebuilt much of the Jewish Quarter of the Old City of Jerusalem. Old synagogues have been reopened. The plaza area of the Kotel has been expanded and is clearly the religious heart of the country. Jews from all over Israel (and all over the world) visit the Kotel for holiday celebrations, bar mitzvahs and, in the case of tourists, as one of the most important highlights of a trip to Israel.

Jerusalem is also at the centre of the dispute between Israelis and Palestinians. Both sides lay claims to the very same piece of land on which the Dome of the Rock now stands and on which two Temples once stood. The Old City of Jerusalem and East Jerusalem have significant Arab populations and the Palestinians would like to make Jerusalem the capital of their eventual state. While some Israeli negotiators have been willing to make some concessions with respect to Jerusalem, none of these concessions were viewed as sufficient by the Palestinians. The Bill Clinton brokered peace talks apparently collapsed over this very issue. Now the political climate in Israel has shifted somewhat and there is little appetite for any deal that might give up control over East Jerusalem and certainly not the walled Old City, which includes Judaism’s holiest site.

It might be fair to say that Jerusalem Day is marked most fervently by Orthodox Jews and in particular by those on the right of political spectrum. Yesterday, for example, a group of observant Jews went to conduct prayer services on the grounds of the Dome of the Rock, since this was the exact spot on which the Temple once stood. Though this is somewhat provocative, it is a site that is holy to different groups and ought to be accessible as such.

Jerusalem celebrations took place across the country. Here in Ra’anana, at the centre of the city, Yad L’Banim, a communal sing-a-long was organized where participants were invited to join in singing songs about Jerusalem.

I decided to wander over to the festivities which were about ten minutes walking distance from my place. The evening featured well known counter-tenor David D’Or along with a group of symphony musicians. It also featured a group of singers known as “Kolot Min Hashamayim” – “Voices from the Heavens” from the Melachim School. The Mayor of Ra’anana, Nahum Hofri, was invited to the stage and led the singing of one of Israel’s most iconic songs, Yerushalayim Shel Zahav (“Jerusalem of Gold”).

But after watching the performances for a little while, I couldn’t help but notice that there were no women singers. Kolot Min Hashamayim is a religious choir which uses prepubescent boys to sing the female parts. I was standing and listening to some well- known pieces of music that feature some wonderful female vocal parts which were all being sung by young boys. While this is common in Orthodox Synagogues, singing liturgical pieces, it has certainly never been a major part of public Israeli national celebrations. In fact, one of the great things that Israel has produced has been music, sung by men and women together. Here, from looking at the program, there were no "mixed" performances scheduled and no women vocalists. Standing and watching these performances, I couldn’t help but feel a sense of "Sharia creep" – the idea that the Orthodox and Ultra-Orthodox were expanding their influence beyond synagogues to include public celebrations. As I have written in other blogs, the issue of public performances by female vocalists has been attracting a great deal of attention as ultra-orthodox groups have been trying to limit or eliminate these performances. Feeling that I was participating in something that was edging closer to Iran, I couldn’t help but leave before the evening ended.

Is there a tie in between the fervent celebration of Jerusalem Day and the issue of Sharia creep, barring women from singing publicly? Perhaps not, though it is probably fair to say that those on the political and religious left are much less inclined to celebrate Jerusalem Day as fervently. For many on that end of the spectrum, Jerusalem Day is a reminder that there is a still a great deal of unfinished business – that the need to reach a peace deal or an arrangement with the Palestinians is urgent and that Jerusalem is still at the heart of the dispute. Even so, there is probably still a broad national consensus supporting the current Israeli political position that the Old City of Jerusalem can never again be divided, which is at least some cause for commemoration and celebration by all those who support that view.


Posted by Ranana Reveller at 7:02 AM