Unorthodox by Deborah Feldman - A Review 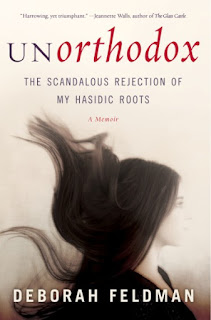 I had the chance to read Unorthodox by Deborah Feldman recently. This autobiographical memoir tells the story of a woman growing up in the ultra-orthodox Satmar Chassidic community in Williamsburg, New York and her eventual escape from that community.

Feldman's book is a fairly quick read. The prose is fairly simple and at times choppy. It is written in a first person, present tense style, so that events that occurred many years ago are described as though they are current events.

On hearing about the book, I was quite interested to read it. I came away with a bit more of a mixed feeling.

On the one hand, I was quite moved by Feldman's vivid description of the oppressive nature of Satmar society, particularly with respect to women. The book is filled with incidents throughout Feldman's childhood that demonstrate the ways in which women and their aspirations are suppressed. From a very young age, it is only boys that are introduced to and taught to learn from high level Jewish religious texts. Through the use of Tzniut ("modesty") rules, girls are kept covered up and hidden away. Even their voices are not to be heard in public. Decisions are made for them throughout their lives. Feldman describes how she was transferred from the rules of her grandfather (she was living with her grandparents) to a husband who was selected for her and to a hope that her new husband would not be too "strict."

There is a description of a Simchat Torah celebration that I felt was particularly poignant. All of the women are up in the balcony waiting to watch, through a small slat, as the Satmar Rebbe enters the synagogue and dances the Torah. The women are confined to the role of outsiders and do not really participate in the celebration other than as spectators. Sadly, this is not only case in Satmar communities but applies to most other Orthodox religious institutions. In fact, a friend of mine was telling me about her celebration of Simchat Torah a couple of years ago in an Orthodox shul and she described it in a very similar way.

Feldman also devotes much of her book to her feelings of being an outsider. Inspired by the writings of authors such as Roald Dahl, in particular his book Matilda, as well as a range of other books, Feldman describes her resistance to accepting everything that she was being taught. I could really relate to this theme of the book, as Feldman, the self-described trouble maker, rails against abuses of authority, whether by teachers, or other authority figures. She applies this not only to questioning the gender discrimination aspects of Satmar society that are mandated, but other rules and issues and even the very existence of God, or at least the nature of God and the truth of many of the rules that have been instilled as God given law. This is very rebellious for a girl in an ultra-religious school.

A great deal of time is also spent discussing sexuality. Feldman describes the suppressive rules that are maintained throughout adolesence and then she provides a very detailed account of very personal experiences including her first time in the Mikvah (ritual bath), her wedding night and her own experiences with her husband. I began to wonder whether there was too much information here and how difficult it must be for her ex-husband to see so much written about his intimate life with his former wife published in this type of book.

There is an unpolished, at times juvenile feel to the book, written by an author who is not yet 25, presenting an autobiography. The book, as one might expect, has generated a great deal of controversy. Some have asserted that chunks of the book are fabricated or fictitious. Someone has even created a website dedicated to attacking parts of the book (http://deborah-feldman-exposed.blogspot.com/). Feldman's introductory remarks do not dispel concerns a reader might have that the events in the book may not have occurred. A sense of credibility and authenticity slowly melts away as the book progresses. Towards the end of the book Feldman describes herself, now having taken up smoking, sitting in a non-Kosher restaurant and eating all of the foods that were previously forbidden to her by the rules of Kashrut. Yes, she has fully rebelled, but I couldn't help but feel a certain lack of credibility or feel that a humility of purpose had been compromised by the end of the book. As a result, the later parts of the book resonated less with me and caused me to wonder about some of the earlier parts.

Overall, however, I think the theme of the suppression of women that Feldman describes is genuine, whether or not every aspect of the book is factual. Israel has been wrestling with this issue in its ultra-orthodox communities as I have described in a number of other blog articles. Gender discrimination is an issue that even squarely challenges mainstream Orthdox Judaism, a religion that continues to insist on gender-based rules while most other aspects of liberal democratic societies have moved or are moving towards gender equality. I have also written about this in many other blog articles and perhaps that is why I was so drawn to reading the book.