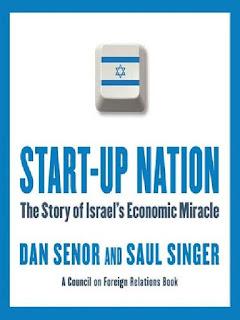 Many of the readers of this blog may have already read Start-Up Nation: The Story of Israel’s Economic Miracle,” since it was released in 2009. By I only had the chance to read it recently, and I thought I would add some short comments to my blog.

Written by Dan Senor and Saul Singer, Start-Up Nation is an essay-style book about the factors that have led to Israeli success, primarily in the high tech area. It is a fairly quick read, filled with interesting facts and information. The authors interviewed quite a number of people in putting together their report-style work, including Israeli business leaders, entrepreneurs, politicians and others.

Senor and Singer run through some of the aspects of Israeli society that have contributed to Israel’s unique success in some high tech areas. They highlight the mandatory military service that all Israelis are required to perform and write extensively about the positive benefits of that service. In particular, they highlight Israeli military culture, which is much “flatter” and less hierarchical than most other militaries. According to Senor and Singer, Israeli recruits and serving members of the armed forces have a great deal of independence and autonomy. They are encouraged to question their superiors and make crucial decisions themselves. Unlike the U.S. slogan of “salute the rank, not the person,” Israeli soldiers are taught to pay more attention to the decisions the person is making. This culture of individual responsibility and questioning of authority continues after military service into workplaces across the country. A CEO might face abrupt questioning from a very junior employee and that is viewed as very helpful for corporate development.

The authors also discuss a number of other factors including the impact of massive immigration to Israel from the former Soviet Union and from Ethiopia; the adaptation of technology from the military to the private sector in so many areas; the participation by the government and government-related organizations in funding start-up business; a sea change in the way the Israeli government has regulated economic policy in Israel since the mid ‘90s; and a general cultural idea that it is okay to fail in business – the first time or even the first few times.

Along the way, a fascinating history of Israel’s economic development is presented. This is not an all-encompassing look at the history of Israel nor is it a political essay. The authors briefly touch on the need to address issues involving Israeli-Palestinian tensions, secular-religious tensions and other issues that might threaten the continued success of Israel’s economy. But above all, this is an optimistic and fascinating look at the massive growth of the Israeli economy – with an effort to suggest how some other countries might emulate some of Israel’s key strategies.

Posted by Ranana Reveller at 7:41 AM