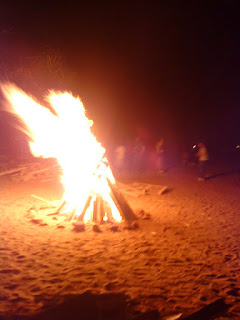 For Israeli kids, Lag B'Omer is one of the most exciting holidays of the year. It takes place on the 18th day of the Hebrew month of Iyar. This year, that was the 10th of May, 2012. The holiday marks the anniversary of the death of Rabbi Shimon Bar Yochai, a great Mishnah-era rabbi. There are many religious aspects to the celebration of the holiday, primarily observed by the Orthodox and ultra-Orthdox communities. For example, many Orthodox families only cut their son's hair for the first time when he turns 3 years of age - at the first Lag B'Omer after the third birthday.

For most other Israelis, the holiday is bonfire day. People across Israel celebrate the holiday after sundown the previous evening by getting together and lighting huge bonfires. If you were to fly over Israel at 9 or 10 p.m., or even 12:00 a.m. on Lag B'Omer, it would probably look like the country had been attacked. Huge fires everywhere and billows of smoke.

Israelis gather around these bonfires and roast marshmallows, sing songs and enjoy barbecued food while making the bonfire as big as possible. From just after Pesach (Passover), you can see young kids walking along streets and sidewalks pulling wagon loads of wood that they have found to store and prepare for the big day.

The remarkable thing, in typically Israeli style, is the emphasis on independence and relatively minimal supevision for teens as young as 13. Often, groups of kids, 13-18, gather together for bonfires and barbecues without any adults or adult supervision. It seems incredible that some of these fires don't get completely out of hand but children in Israel are often given a great deal of independence and responsibility from an early age.

Many of the older kids stay out all night and Lag B'Omer is a school holiday. For parents, particularly parents of teenagers, it can be stressful worrying about the safety of some of these bonfires. Is your child going to be the foolish one who tries to show everyone that he or she can jump through the bonfire, unscathed? (Don't think I'm making that up...) But for the kids, Lag B'Omer really is a highlight of the year. Most are well behaved and there are relatively few incidents reported each year. Israeli culture has taken a holiday that was religious in origin and turned it, largely, into a secular fire festival, accessible to and celebrated by Israelis across the spectrum from the religious and ultra-religious to the avowedly secular and atheist.

Posted by Ranana Reveller at 9:45 AM