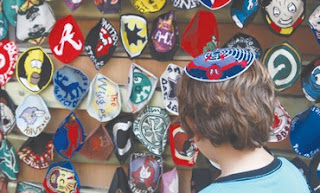 At the speed of light, he arrives just in time...(That's Spiderman we're talking about - and those are words from the theme song of the Spiderman television show that ran from 1967 to 1970 but was replayed on television repeatedly throughout the 70s and 80s).

Well - it looks like Kippa Man is going to need some help from a legal superhero to avoid an injunction or a large award of damages.

Kippa Man is a store on Ben-Yehuda Street in Jerusalem which sells all different types of Kippas (Yarmulkes or Skullcaps).  Some are crocheted in Israel or the Palestinian Territories, some are embroidered in China and some are printed in China.  You can get Kippas with logos of major sports franchises, cartoon characters and many other designs.

Apparently, a visiting Marvel Comics executive didn't like what he saw when he walked by Kippa Man in Jerusalem on July 30, 2012.  He bought himself a Spiderman kippa as "evidence."  On September 12, 2012, Marvel served Kippa Man and its owner Avi Binyamin with a 100,000 N.I.S. lawsuit (about $25,000) for copyright infringement.

It appears that these companies have decided to use Kippa Man as the first example (a sort of test case) and have held off launching lawsuits against the many other purveyors of unlicensed kippas in this highly congested tourist area of Jerusalem, even though most of the other stores have continued to display and sell their Spiderman and Batman kippas.  For his part, Binyamin was quoted in Ma'ariv as explaining that he only buys the kippas from Chinese producers, like all of the other stores in the area. If they really wanted to stop the distribution of this unlicensed merchandise, he explained, they would go after the producers.

The Kippa Man story has emerged at a particularly reflective time.  Jews around the world are contemplating their various sins this week as Yom Kippur approaches.  We read, and ask forgiveness for, a whole list of sins on behalf of ourselves and our whole community.  Some of us may have to add "copyright infringement" to the list, particularly those of us who are at shul wearing an unlicensed Spiderman or Batman kippa.

This may only be the beginning of the lawsuits.  Expect visits to Israel soon from NHL owners who have time on their hands (with the pending lockout and possible cancellation of the 2012-2013 season).  After all, the stores on Ben Yehuda also sell kippas with NHL logos (as well as team logos of other professional leagues).  Given the play over the past few years of the Toronto Maple Leafs, you don't tend to see very many Maple Leaf kippas and it may be difficult to find someone who has actuallly bought one.  But the NHL owners may still want to pile on this shot at protecting their intellectual property.

It wasn't yet clear whether Marvel Comics and Warner Brothers (and others) would try to get urgent injunction orders allowing them to confiscate kippas from synagogue attenders across Israel on Yom Kippur (next Wednesday, September 24, 2012).  But those who are worried about it may wish to stick to a plain white kippa and play it safe.

Posted by Ranana Reveller at 7:59 AM