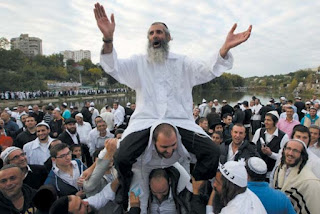 For many Jews around the world, Israel would be the best place to spend the holy days of Rosh Hashanah, the Jewish New Year, which took place this year on September 17 and 18, 2012.  Whether at the Kotel (the Western Wall), some other synagogue in Jerusalem, or our own egalitarian Conservative shul in K'far Saba, Hod v'Hadar, there is a very special atmosphere in Israel this time of year.

But for a growing number of Israelis and other Jews, especially Breslaver Hassids, Rosh Hashanah is the time to leave Israel and head for Uman, Ukraine.  This year, it is estimated that more than 30,000 people went to celebrate the Jewish New Year near the grave site of the late Rabbi Nachman of Breslev, the founder of Breslaver Hassidism.

Rabbi Nachman died in 1810.  But more recently, since the fall of communism, an increasingly large number of Breslaver Hassids and others have been travelling to the Ukraine on pilgrimages to Rabbi Nachman's grave on Rosh Hashanah.

The Breslaver movement charters hundreds of planes to fly directly from Israel to the Ukraine, where pilgrimage participants can then take a 3 hour bus ride to the grave site area,  which is located about 125 miles south of Kiev.  Almost all of the pilgrims are men, most of whom are married and have left their wives and families to come have a spiritual "cleansing" with thousands of other like minded folks.  One commentator called it a "milluim" ("army reserve duty") for the ultra-religious.

For some, it really  is a quintessentially religious experience - standing together in groups of hundreds, if not thousands of men, chanting Rosh Hashanah prayers and hymns and being moved by a unique spiritual journey.  Many of the devout Brelaver Hassidim, might well be in Uman, motivated solely by this genuine sense of religious belief.

For others, the religious side is combined with a very material, worldly experience.  According to some reports, there is no shortage of alcohol, drugs and even prostitutes, thought the estimates of how many people are participating in these activities varies wildly.  For these people, it is like a sort of Woodstock festival, with minimalist accomodations (maybe even tents) (or rented apartments from locals), late nights, music and a general party atomosphere.

In past years, some fights have broken out - and some arrests have been made.  There have even been anti-Semitic attacks on the pilgrims, culminating in some very nasty incidents in 2010 (some Hassidim were deported back to Israel), though this year, such incidents have apparently been virtually non-existent.

Pilgrims make their way to Pushkina Street, the main street in this small town, which now relies on Rosh Hashanah pilgrimages as its main industry.  Townsfolk rent out their places for the holiday for an estimated going rate of $250 per night and try to sell touristy knick-knacks.  Those who have attended say that the highlight of the pilgrimage is the Taschlich ceremony, attended by thousands on the afternoon of Rosh Hashanah.  After symbolically throwing their sins into a nearby body of water, participants sing and dance wildly.

The Breslev movemement is probably earning some significant profits from all of these chartered flights from Israel to Kiev.  The onslaught is so enormous that the Ukranian authorities have apparently instituted streamlined border procedures.  They check passports on the plane and then simply unload the luggage on the tarmac.

This annual event has attracted a certain mystique, even among secular Israelis and observant Jews who are not Hassidim.  More and more non-Breslev Israelis are booking these charter flights and attending the event.  I personally know at least three people who went this year  (without their wives...)who could hardly be classified as Hassidim.

According to Breslev belief, Rabbi Nachman told his followers before he died that he would intercede on behalf of anyone who came to pray at his grave.  He specifically requested that he be buried in Uman.  So perhaps this promise of spiritual intercession is enough to convince those who are looking for a miracle that it is worth a try.  Or perhaps there are many Israelis who are simply looking for a great experience with 30,000 of their nearest and dearest friends.

No matter what the reason, thousands of Israelis are now deciding annually that they would rather spend Rosh Hashanah in Uman, Ukraine than in Israel.  From a strictly Jewish perspective, that just seems bizarre to me - but then again, I was too young to attend Woodstock .and I feel no spiritual connection to Uman, Ukraine

Posted by Ranana Reveller at 8:21 AM