In Israel, we moved the clocks back one hour to daylight savings time Sunday the 23rd of September (early in the morning).  The move to DST was weeks ahead of many other countries around the world.  But with Yom Kippur approaching, the Israeli government was ensuring that the Yom Kippur fast would end at about 6:00 p.m. instead of 7:00 p.m.  Does the extra hour make that big of a difference?  Many believe that it is easier to start the fast earlier and finish it earlier.  It is still the same 26 hours in total, but it does seem easier to conclude the fast earlier in the day.

In any event, this is an illustration of the central role tht religion plays in Israel and, in particular, Yom Kippur.  Many secular Israelis were vocally opposed to this early clock change.  It meant that it would become dark in Israel by 6 p.m. and earlier in September and October.  These are months in which the temperature can still top 30 degrees Celsius and the waters of the Mediterranean Sea are still quite inviting.  DST cuts out an hour of after-school or after-work enjoyment of some great outdoor activity weather.  The clock change is premature.  Debates have been held in the Knesset about this and will undoubtedly continue.  My thought is that as a compromise, we should move the clocks back after Simchat Torah for about a month.  In other words,  have DST temporarily for about 2 weeks for the Jewish holydays and then move them back until early November - and change with the rest of the world at that time.

But whether Israel is on DST or regular time, Yom Kippur in Israel is still an amazing holiday. The entire country really comes to a standstill for a 26 hour period.  Almost nothing is open anywhere.  Stores, restaurants, buses - everything is closed.  There are practically no cars on the road - as shown in this picture that I found on another site - other than emergency vehicles. 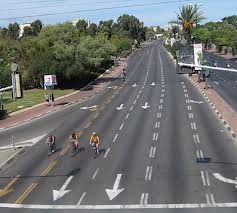 Incredibly, even completely secular Israelis avoid using their cars on Yom Kippur.  Instead, the day has become somewhat of a national bike day - with kids and adults on their bikes everywhere across the country. Despite all of this bicycle activiity, according to a recent Gesher poll picked up by the Jerusalem Post, more than 60% of Israelis indicated that they intended to fast on Yom Kippur.  That percentage is of course much higher than the the percentage of Israelis who would define themselves as observant or religious.  So Yom Kippur still has a special pull, even for those who are otherwise not very observant.

For our part, we spent Erev Yom Kippur,  Tuesday night, at our shul in Kfar Saba, Hod v'Hadar.  We drove to the Synagogue before Yom Kippur  began and left our car in a parking spot on the street near the shul for the day.  Starting the fast at 5 p.m. (because of the clock change) means eating as early as 3 p.m. or so to make sure that you are on time for synagogue services.  We walked back from Kfar Saba to Ra'anana - about an hour long walk.  On the way, we crossed one of Israel's major highways.  There was not a car on the road other than two or three ambulances and a police vehicle.  With so many people using their bicycles, there are usually quite a number of bicycle accidents, some of them serious, so the ambulances still have to be ready.

In Ra'anana, there were thousands of people in the streets, walking up and down the centre of the city and enjoying the atmosphere.  Very little noise other then the sounds of peoples voices. No cars.  No commercial activity.  But lots of people, especially kids riding around on bikes.

We spent Yom Kippur day in Ra'anana at the house of one of the families from our shul.  For many years now they have been holding Yom Kippur services in their house for 60-80 people.  The service was very participatory, egalitarian and somewhat abbreviated.  Our family members participated by reading from the Torah in the morning.  Many of the people attending had some kind of role.  It was a terrific, spiritually meaningful way to spend Yom Kippur.  We all broke the fast together at about 6:20 p.m. with food that participants had prepared and delivered to the house the day before.

For those of us who have lived our lives in North America or other places outside of Israel, we get accustomed to the idea that everything is still going on all around us while we are observing Yom Kippur.  We see the usual traffic and commercial activity  and might even be worried about our businesses that day.  It is really special to see the way Yom Kippur is observed in Israel.  To see a day on which everything comes to a stop - especially in today's fast paced world, where that seems increasingly unfathomable - is really quite something.

Wishing everyone a happy and healthy new year.

Posted by Ranana Reveller at 5:10 AM