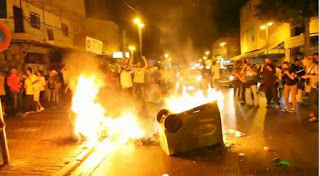 For Jewish people, Passover marks the beginning of a 50 day time period between two Jewish holidays. The holiday of Passover - Pesach - commemorates the exodus of the Israelites from slavery in Egypt to freedom in the eventual land of Israel. 50 days later, Jews celebrate the holiday of Shavuoth, which marks the receipt of the Torah. On Shavuoth, the Torah reading that is read out loud in synagogues across the world includes the Ten Commandments. The two holidays, Shavuoth and Pesach, are linked by the idea that with freedom comes responsibility; that it is the rule of law that brings order and justice to a community.

As Jews in Israel celebrated their freedom and independence this year, marking not only the holidays of Pesach and Shavuoth but other national holidays that fall within that same 50-day time period including Israeli Independence Day (Yom Haatzmauth) and Israel's Memorial Day (Yom Hazikaron), Israelis were also forced to wrestle with the issue of freedom for a different group of people - African migrants who have made their way to Israel from Sudan, South Sudan and Eritrea.

What are the legal and moral obligations of western democracies with respect to refugee claims? Are countries obligated to receive and provide shelter for all those who arrive from war-torn or famine-torn countries? If so, if that is something intended by the UN, does the U.N. and its constituent countries have any obligations to help settle, disperse or absorb these refugees and migrants? Or is it just a matter of requiring the nearest country to absorb whatever numbers arrive?

Over the past few years, Israel has seen a very large number of migrants from different African countries, particularly Sudan, South Sudan and Eritrea enter the country. (Eritrea borders Sudan and Ethiopia - see map). Many of these migrants walk through Egypt on a perilous journey to make it to Israel's border, where they cross illegally and enter Israel. Along they way, they are often aided by Bedouins, some of whom provide helpful support. But many are not as lucky and face all kinds of difficulties crossing through Egypt where they can wind up being jailed, attacked or even shot to death by Egyptians including Egyptian military officials or police.

Until recently, Israel's border with Egypt was not very secure. Migrant Africans have been crossing into Israel in all different ways, other than through the official border crossing stations. The Israeli government is now in the process of building a giant wall along the border to control immigration access, primarily as a reaction to this flood of illegal immigration.

Some monitoring groups have put the estimated number of African migrants reaching Israel at 1,500 to 2,000 per month, with estimates of a total of 60,000 now living in Israel, a country with a total population of approximately 7,800,000 of whom, close to 6 million are Jewish.

Many of the African migrants have congregated in the South Tel-Aviv neighbourhood of Hatikvah. According to Israeli law, the children of the migrants are able to attend school and many have been doing so. But since the parents are not legal immigrants, they are not given ID numbers and are therefore not entitled to work in Israel legally. They are not being treated as landed immigrants - though a few hundred have been treated as such. As a result, they are currently living in slum like conditions amidst a population that is very concerned about the threats to its public safety, security and its financial capacity to provide support to this growing number of newly arrived migrant Africans. As difficult as these conditions are for the African migrants who arrive, the migrants are also aware that Israel treats them much better than any of the surrounding Middle Eastern countries, though many would prefer to make it to Italy or France.

This issue has created a great deal of discussion and controversy recently in Israel, particularly after a few highly publicized incidents of criminal conduct involving migrant Africans and at least two brutal sexual assaults. The issue has occupied many of the news headlines, the airwaves on radio talk shows and political discussions, particularly, after some highly publicized crimes.

Prime Minister Benyamin Netanyahu got the ball rolling by noting that 60,000 could soon turn into 600,000 and that could "threaten our existence as a Jewish and Democratic State." A few days later, Likud MK (Member of Knesset - the Israeli Parliament) Miri Regev called the Sudanese migrants "a cancer in our body." The Israeli Minister of the Interior Eli Yishai called for the detention and expulsion of all asylum seekers. The Attorney General, Yehudah Weinstein has asked for a court order to permit large scale deportation. So far, his request has been rejected though Israeli courts are still hearing these petitions.

Not surprisingly, some of these provocative, racially laced statements fostered an environment in which a group of 1,000 Israeli protesters turned up in the Hatikvah neighbourhood on Wednesday night May 23, 2012 to demand that the Africans be expelled. Some Sudanese and Eritreans were beaten up by some of the protesters. 17 Israeli were arrested. Protesters held viciously worded banners directed at illegal African immigrants.

This violence and hatred was roundly condemned by Prime Minister Netanyahu. But the underlying issues are quite difficult. Israel cannot be expected to absorb hundreds of thousands of migrant Africans merely because they arrived at Israel's borders. At the same time, Israel is not about to send people back to places where they face a high risk of death because of political or military-civilian strife. Even if the main issue is starvation or disastrous economic conditions, rather than political fighting, civil war, or threatened genocide, there is still a compelling case to be made that a significant number of these migrants should be allowed to stay in Israel, even if only temporarily, until the African strife is resolved.

After all, many Israels know their history well and know that no country wanted to accept Jewish refugees who were trying to flee Europe in search of safety. Many Israelis feel that it is incumbent on Jewish people to demonstrate that they can address this type of issue more appropriately. Some other Israelis have responded by arguing that the current wave of migrant Africans are economic refugees who are seeking a better life - and that this is a very different category from people fleeing genocide. Moreover, they argue the UN and other international agencies, bodies and states must share this challenge and find a way to resettle these African migrants if they cannot be repatriated.

Israeli courts are hearing and adjudicating applications to deport or expel large numbers of these migrants. Some Knesset members have been calling for the full and immediate expulsion of all illegal migrants. But the source countries each present their own difficulties. Whether it is extremely dangerous conditions (as in the case of Eritrea) or countries that do not have diplomatic relationships with Israel (Sudan), it is simply not feasible to expect that Israel will
be able to carry out that type of mass repatriation (or expulsion).

Moreover, even if Israel could expel all of these migrants, there are a growing number of voices calling for Israel to find a way to absorb at least a significant number.

The additional goal with which Israel must contend is to ensure that Israel, as a Jewish state, continues to serve as a homeland, a haven and a place of refuge for Jewish people from around the world. Israel has absorbed Jewish refugees, in large numbers from Ethiopia, Yemen, the former Soviet Republic and other places. Israel has also absorbed and sheltered non-Jewish refugees from countries including Cambodia and others. But demographically, culturally and religiously, Israel is not in a position to grant hundreds of thousands of non-Jewish migrants landed immigrant status.

So how does Israeli reconcile the "freedom" for the people of Israel with the freedom sought by the African migrants? This has not yet been answered. There have been many different ideas thrown about, including the idea of running large refugee type camps in southern Israel or caravan housing communities until the problems in African blow over somewhat - but that could be generations and could require enormous financial contributions on Israel's part; or simply absorbing and dispersing a certain number of migrants throughout the country rather than see them concentrated in one area. The key challenge will be to absorb at least a certain number in a way that allows them to get decent education, housing and healthcare and to truly become Israelis, while cognizant of the "mission statement" of the country of Israel to serve as a homeland for the Jewish people. And even significant absorption would still means tens of thousands of African migrants who Israel will not be able to absorb. The other countries of the world will have to assist with creative solutions to help the fleeing people of Africa. Even though Israel is closer to Africa than most European countries, it is a very small country and cannot be expected to address a disproportionately large share of this challenging problem.

Hopefully, sooner rather than later, the world and the African countries will tackle the real problem and will find a way to improve the situation in Africa and reduce or eliminate the need for so many people to flee.

Posted by Ranana Reveller at 6:37 PM