Chanuka Approaching 2020: Virus Not Leaving Yet: Update from Israel 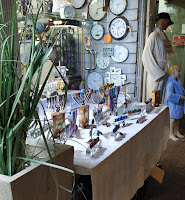 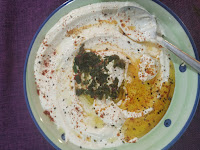 My ongoing  quest to make the perfect Humus continues.  I think I have been doing a pretty good job.  Recipe available on request.  For a while we were buying humus from a local humus shop.  While it was quite good and reasonably priced - I felt it had too much cumin in it for my taste.  So I decided to see if I could get my own homemade humus to compete for the hearts and taste buds of our family members.  Last  Friday's humus was probably our best batch yet, made with extra large chick peas, soaked over night - and then peeled individually after boiling.  Sure it was labour intensive  but very creamy and smooth. 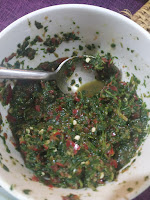 To  go with the humus, I have also been making Zhoug, a  Yemenite-Israeli hot sauce that combines hot peppers with fresh cilantro leaves and a  range of spices in small quantities - ground coriander, cumin, cardamon, cloves, black pepper and  maybe  even  a touch of  cinnamon.   This has also been a big hit - even among the hard to please Yemenite critics who have sampled it.
Next up of course will be latkes for Chanuka though I expect that we will just make the classic traditional type.  It's only once a year - a few latkes can't be that bad, can they? 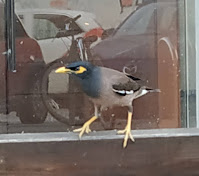 On  the purely random side, I thought I would  add in this picture that I took in Tel-Aviv last week.  This bird was so close and so interested in posing that I had to oblige.
We were right near Rabin Square.   The nearby park area was filled with people  even in the midst of the pandemic.   Apparently, restaurants are serving "take-out packages" that include a blanket, a basket and everything you need to take the meal and go sit in the park and eat it.  Apparently  you return the blanket  and basket etc., when you are  done.  People are constantly coming up with ways to try and  do "normal" things in these pandemic times. 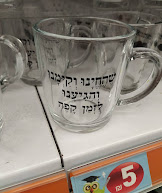 For my last  note,  I couldn't  resist including  this picture of a coffee cup that I saw in a small store.  As you may be able to see, there is a Hebrew blessing written on the mug.
You might be familiar with a blessing called "she'hechyanu"  - which is recited on festive holydays, joyous life cycle events - and other occasions.  It essentially thanks God for "giving us life, sustaining us  and  enabling us to reach this moment."  This coffee  cup changed the blessing a bit to give thanks for "giving us life, sustaining us and  enabling us to reach coffee time."  It is a very applicable blessing for many of my good friends, family members and completely unrelated readers who  love a good cup of coffee.
Here's hoping that the bright lights of the holiday season  - whether the candles we will soon light on Chanukah - or the Christmas lights for those celebrating later this month - will bring us all some real brightness, warmth and joy - and hopefully usher in a much better 2021!
Best of health to everyone.
Posted by Ranana Reveller at 10:05 AM 2 comments:

Municipal elections, no matter where they are held, in my experience, tend to attract more apathy than interest.  Some suggest that is part of a trend of more generalized voter disaffection.  But, it just may be that people simply don't feel it makes a difference who the mayor happens to be, much less the local councilors.  In any case, Israel is no exception from other democracies in this regard.  Voter turnout in Israel's municipal elections on October 22, 2013, according to Haaretz, hit a national average of 32.7%.  The turnout in Tel-Aviv was only 21%.  Contrast that with the 2013 Israeli national elections in which the voter turn out was close to 68%.  Still not a sparkling number, but not nearly as pathetic as the municipal numbers.

As much voter indifference as there may be, municipal elections are probably even less interesting to outsiders.  So to a non-Israeli, in this case, whether a Labour candidate or a Likud candidate happened to be elected in a particular city to oversee garbage collection and local education just does not seem too riveting.  After all, someone's arnona (Israeli property tax) might increase dramatically but as long as it does not affect your property taxes, do you really care?

Nevertheless, since there were municipal elections all across Israel, there had to be some interesting stories.  I thought you would enjoy a few interesting tidbits that emerged from Tuesday's election, some of which are rather amusing, in my view anyways.

This was probably the most interesting mayoral race.  Moshe Leon was the candidate favoured by the religious parties, backed by Avigdor Lieberman (leader of Yisrael Beitenu) (who is currently awaiting the verdict in a corruption trial) and by Aryeh Deri (a political leader of the ultra-orthodox Shas party, who was actually convicted of corruption and served his time).  Leon, who is not even a Jerusalem resident, was parachuted into the race to run against secular candidate and incumbent mayor Nir Barkat.  Well, don't we have to say "Thank G-d!" that Barkat won?   For many Jerusalem residents, it must have been a reverse endorsement for Moshe Leon to be backed by such esteemed public officials as Lieberman and Deri.  The race was not a landslide but Barkat managed to win, much to the chagrin of many of the ultra-orthodox.

Of course I have to write about Ra'anana.  In Ra'anana, Mayor Nahum Hofri was one of the few incumbent mayors, across Israel, to lose an election.  But unlike some other mayors and mayoral candidates (many of whom were facing corruption charges or embroiled in different scandals), nothing of the sort was levelled against Hofri.  Rather, he found himself running against Ze'ev Bielski who had previously been a popular four-term mayor in Ra'anana.  Bielski had left to try his hand, unsuccessfully, in national politics.  Now he returned to Ra'anana politics and picked up 73% of the vote, a ringing endorsement for a returning former mayor.

I couldn't help but notice that the incumbent mayor Ruvik Danilovich won 92% of the vote.  Wow!  Either the candidate was immensely popular - or there was some funny water in the well somewhere....This is an incredible margin of victory in a contemporary democracy.  Okay, I guess it helped that he presented voters with a popular 10 year plan to turn Beersheva into a major Israeli metropolis...It is currently Israel's seventh largest city, with a population of just over 200,000.

I have to mention the mayoral race in Kiryat Eqron, the small town located just outside of Rehovot (population 9,800).  Here, no one won.  That's right, there was no winner.  The incumbent, Arik Hadad, garnered just over 25% of the vote.  But there were a number of other other candidates with more than 10% each.  Sounds like there were almost as many candidates as voters!  So there will be a run-off election in Kiryat Eqron.  This is not surprising given that Kiryat Eqron, a small town, has more than 48 separate synagogues.  In some cases, there are two such shuls, right next to each other, on the same street, with different members of the same family attending different shuls.  With that type of community structure in place, it is not surprising that there would be large number of candidates.  We will eagerly await the results...

Oops, I almost forgot Bet Shemesh.  How could I?  Incumbent ultra-orthodox mayor Moshe Abutbul apparently won the election in Bet Shemesh by less than 1,000 votes.  The problem is that, according to the Jerusalem Post, more than 800 ballots were declared "invalid."  As well, on election day, police raided two apartments owned by ultra-orthodox residents and confiscated more than 200 I.D. cards.  Let's see...800 plus 200...

Challenger Eli Cohen has indicated that he is considering a legal challenge to the results based on reports of possible electoral fraud and "irregularities."  According to the Post, more than 4,000 Bet Shemesh residents have signed a petition demanding that the results be suspended until a proper investigation is conducted.

Finally, it is worth mentioning that corruption charges were no barrier to re-election in Israel.  This is illustrated by the results in Bat-Yam, Ramat Hasharon and Upper Nazareth all of which re-elected mayors facing corruption allegations or charges.  Only in the city of Hadera, voters ousted a candidate who had been accused of taking bribes.  In other jurisdictions these types of allegations seem to have enhanced electability or at least not impeded it.

None of the candidates, to my knowledge, were photographed smoking crack, talking on their cell phones while driving or accused of pinching other candidates in the buttocks at public events.  These are all accusations that have been leveled against the current incumbent mayor of Toronto, Canada - Rob Ford.  However, some of the allegations facing the Israeli mayoral candidates, some of whom were elected, - included bribery, corruption and racism.  These charges were on par with the Toronto municipal scene and were no impediment to re-election in Israel.
Posted by Ranana Reveller at 10:04 PM No comments: