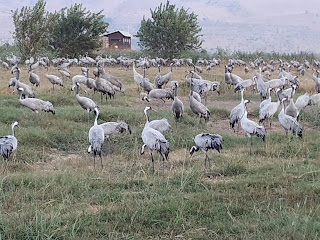 One of the distinct advantages of being in Israel  this time of year is  the weather.  While we may hit some  rainy weather  soon, for the most part we have continued to enjoy very comfortable temperatures, mostly in the mid 20s (C) or 70s if you prefer Fahrenheit.  There are many national parks in Israel, most of which are within a one to two hour drive from Ra'anana.  So there are numerous opportunities to go for a hike, a swim or a combination of both.  We are also only about 15 minutes away from the beach, so that is always another option.

Of course this year has been a very different year all around the world and Israel is no exception.  Most of the national parks have been closed for much of the time since the initial Covid-19 outbreak in early March, 2020.  So we haven't really been able to travel around to all of these wonderful sites.

Over the past few weeks, Israel has moved to a version of "phase 2 reopening" which has included the opening of national parks.  So we decided to take a Sunday trip and visit one of the most incredible sites in Israel - the Hula Valley Nature Reserve.  In short, the Reserve is a bird sanctuary, acting as a major stopover  for birds migrating between Africa, Europe and Asia.  One estimate is that 500 million birds pass through the area each year. 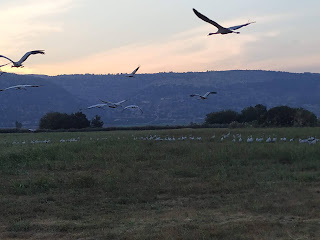 The prime season for seeing the  birds is between late October and mid-March, during which time there are hundreds of thousands of birds in the park each day.

You can visit the park in a number of different ways.  The main park route is a path that is about 8 km long.  You can walk the trail, rent bicycles (single bikes or multi-person  bikes) or you can rent a golf cart.  If you explore the park on your own, you can see several different birds, especially if you are visiting close to sunrise or sunset hours.

We had visited the park previously a few years ago and rented a group  bicycle for five of us.  But we were there in the middle of the day (little did we know). Although we saw some birds, we were  a bit disappointed.

This time we arranged to take the "Sunset Treasures Tour."  This is a one hour group tour on a big tractor-pulled wagon - that looks like it can seat about 40-50 people normally.  During these Covid-19 times, we were all spaced out and grouped in "capsules" with 3 seats separating each group.  Everyone had to wear a mask.

But this tour was simply extraordinary.  The tractor is able to enter areas that are normally off-limits and drive right alongside flocks of birds without scaring the birds away -  because the tractor is the same type  as the park's feeding  tractors.  As you can see from the photos above, we drove right up to enormous flocks of birds, turned off the engine and sat quietly watching  them.  Hundreds, if not thousands of birds ascended and descended as we watched. 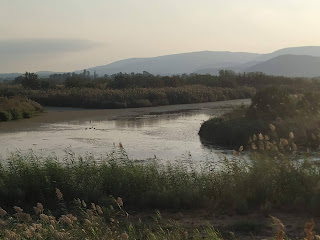 We had an outstanding tour guide who was well equipped with very high powered  binoculars.  She was able to point out a wide range of  birds including spoonbills, pelicans, herons and many others.  The vast majority of the birds in the park are common cranes.  While they may not be the world's most beautiful bird, it is quite  incredible to see  so many of them chirping  and squawking in one place.

Before taking the sunset tour, we made our way through the park.  We didn't  see  nearly as many birds but we still had some great views.  Our guide recommended trying the "sunrise magic" tour as well, which means getting to the park at about 5 a.m. - for a pre-booked tour.  Sounds tempting and we might try it one  day but the Sunset Treasures tour at about 5 p.m. is somewhat more manageable.  This was so fantastic that we might even do it again before  the end of the season.

The Hula Valley Reserve is located in northern Israel not too far from Kiryat Shemona - which is at the border between Israel and Lebanon.  It is about a one and a half hour drive from Ra'anana or other parts of central Israel.  For anyone in Israel between November and March, this is really a special experience. 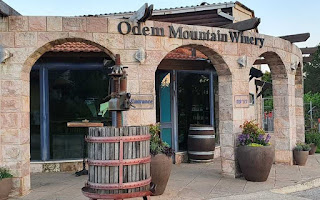 Before arriving at the Hula Valley Reserve, we looked for a winery to visit that we hadn't yet toured.  Pickings were  slim these days because of Covid-19 and most wineries were not open for the full tasting experience.  Some, however, have their wine stores and gift shops open.

We decided to visit the Har Odem Winery (Odem Mountain Winery), which is located in the  Golan Heights, in northern Israel.  It  is about  25 minutes away  from  the Hula Valley Reserve.  Odem is a winery that was founded in 2003 by the Alfasi family.  It is described as the "northern most winery in Israel" with grapes growing at an elevation of between 1100 and 1200 metres above sea level.

The grapes are grown on volcanic soil and the vineyards are snow covered for much of the winter.  The weather in the spring and summer is quite nice.  A variety of different grapes are grown.

Because of Covid-19, we were not able to arrange a full wine tasting.  But we were able to buy a bottle of Nebbiolo-Syrah and drink it outside.  Nebbiolo is not a commonly grown grape in Israel so this is a unique blended wine.  There were a few tables set up so the four of us chose one and enjoyed  this rich tasting wine along with some perfect weather.   The winery representative, Erez, I believe, was knowledgeable, friendly, funny and helpful.  He brought us a nice platter of cheese and bread to go with the wine (all local goat cheeses and local breads) (and all kosher) and spoke to us about the full range of Odem wines.  We quite enjoyed the unique wine that we tasted, though it was a bit on the pricey side at 180 shequels (about $72 Cdn).  But this was one of their higher end wines.  Since we bought a few, we received a discount so the price worked out to be better than full retail.  The winery also has a few white wines, a range of red wines starting with the winery's basic cabernet and some other varietals at about 69 shq ($28 Cdn).  The winery store also sells locally produced olive oil, jams and locally made ceramics.  It was quite a nice store and quite a nice winery to visit.  We did also pick up some of the olive oil and a delicious cherry jam.

By the time we finished the sunset tour, made a pit stop and left the Hula Reserve, we were getting hungry.  And it was probably close to 8 p.m.  So we drove to the nearby town of Rosh Pina and set out to find something to eat.  All the restaurants were only running take out services due to Covid-19 so we were going to have to eat outside or in our car. 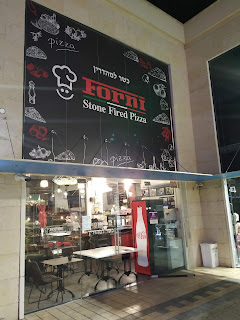 We managed to come across Forni Stone Fired Pizza - a strictly Kosher pizza place ("Kosher l'Mehadrin").  We thought about it for a bit and then decided to order.  The pizza was thin crusted Italian style pizza.  We picked our toppings, placed our order and waited.

The service was prompt and friendly and the pizza was ready quite quickly.  It was reasonably priced and very tasty.

We are hard to please when it comes to pizza since as a general rule, the pizza in Israel is not great.  This is probably due in part to the lack of really good mozzarella and other hard cheeses.  Sometimes the pizza sauces are also quite bland.  In Ra'anana, for example, there are just aren't many pizza places that I would recommend.

But Forni pizza was quite good.  One of our foursome said that it was the "best pizza she had eaten in Israel."  We have had some good pizza over the years, in Jerusalem, in K'far Saba and maybe  even at one or two of the places in Ra'anana.   So that is a pretty good compliment.  This crust was done really well.  The sauce was tangy and the cheese was tasty.   All of us enjoyed it.  So next time we are in Rosh Pina and hungry, we have a place to go.  Not that we are in Rosh Pina that often but you never know.

In fact, whenever I think of Rosh Pina, with its estimated population of about 3,000, I think of a song written by Natan Zach Z"L who died this past week.  The song was sung by Israeli singer Nurit Galron, called "Pizmon Hozer" ("Repeating Chorus").  I first heard it in the mid-1980s.  It starts off with the words:

I went to Kiryat Shemona - but I had nothing to do there.

I continued to Rosh Pina - but I had no one to talk to there....

In fairness to Rosh Pina, the lyricist continues on, sung soulfully by Galron, to mention other places where there was nothing going on  - including Haifa, Holon and Ashdod and ultimately, the sea.  But the first verse always seemed to stick out in my head - that there was nothing to do in the small town of Rosh Pina.  My association is reinforced by the memory of being stuck in Rosh Pina in 1986 on a Friday afternoon after the last bus had left the town just  after 2:00 p.m. with no way to get back to Jerusalem.

But now I know there is at least one thing to do there - I can get some pretty decent pizza to eat.  So I now have a new association in my head when "Rosh Pina" pops up.  And it's a tasty one.

Shabbat Shalom and best of health to everyone.

Posted by Ranana Reveller at 5:09 PM No comments: