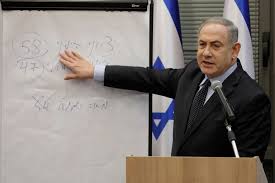 The results are in from the 3rd consecutive Israeli election within a span of a year and they are just about final.  More than 99% of the ballots have been counted.  The final result?  No clear winner.

I think it is fair to say that Israel is in the midst of a constitutional crisis.  The country is split down the middle between right and left and the two sides have not been able to compromise and form a government.  Nothing from the most recent election (on Monday March 2, 2020) suggests that this is about to change.

Here are the current results (which are likely to be certified in the coming days):

I have included in brackets the change for each party over the last election results from September 2019.  Prime Minister Netanyahu ran  with a "right bloc" which included Likud, Shas, Yehadut HaTorah and Yamina.  His bloc wound up with 55 seats in September 2019 and has now increased to 58.  However, a majority in the Israeli Knesset is 61 (out of 120).  Without 61, a government cannot be formed since the "bloc" cannot control the Knesset.

Over the course of the past three elections, including the most recent one, Netanyahu has insisted that his "bloc" will stay together and not be broken up.  In any coalition talks with other parties, he has maintained that any government will include all of these parties.  The difficulty is that all of the remaining parties oppose significant parts of the agenda that these 4 parties are proffering.  Blue and White, Yisrael Beitenu and, AMG are all looking to reduce the power of the ultra-religious, at least to some extent.

The bigger issue has been a key demand made by Netanyahu.  As you may know, he is currently facing three separate, serious criminal indictments.  His trial is due to start in about two weeks, though it may take a year or two until it is completed.  His party has been insisting on two different laws (bills to be passed) as part of any coalition agreement. One law would grant him retroactive immunity from prosecution while holding office.  Some forms of this law would allow him to be prosecuted after leaving office while others would immunize him outright.  The other bill would ensure that the Supreme Court cannot strike down the first law - by allowing the Knesset to override any decision of the Supreme Court.  Both of these bills are acceptable to Netanyahu's bloc partners. But neither bill is acceptable to any other party.

The main reason that a coalition agreement could not be reached after the past two elections was that no  other parties were prepared to accede to Netanyahu's demands for retroactive immunity.  He had to keep going with additional elections until he could get 61 supporters to pass these bills.  It was literally life or death for him politically.  Without immunity, he risks going to prison, if convicted.

On Monday night, after the election, as exit poll results were coming in, Netanyahu claimed that he had won an "enormous victory."  His expectation was that he would be able to reach 61 seats, put together his right wing coalition and legislate away his criminal problems.  For a while, that looked like it might happen.  His supporters were seen dancing, singing songs of victory and celebrating wildly.

But  as the real results dripped in slowly, the picture began to change.  Netanyahu wound up with a bloc of only 58 seats, three short of a majority.

On Tuesday, he sent out all of his key advisors and former ministers to argue on TV and radio appearances that he had won the election, that the Israeli public had made a decision and that he should now be able to form the government.  The problem is that this was premature and inaccurate.  While he had won 3 more seats than the Blue and White party and that gave him a plurality, it was not enough to give him a majority.  58 Knesset members have been elected in support of Netanyahu and his bloc but 62 have been elected to oppose that bloc.  Most people, though not everyone these days, agree that 62 is more than 58.

By Wednesday morning, the opposition parties - sometimes described as centre-left together with the Joint List, were proposing a law that would bar a leader under indictment from serving as Prime Minister.  If they are able to pass this law, Netanyahu would be out of cards to play other than perhaps an appeal to the Israeli Supreme Court to override the law.  (From a legal perspective, there is a reasonable argument that it is an improper law since it would be enacted after Bibi won the election).  It is almost like fighting one retroactive proposal by enacting another one.  Not the strategy I might have chosen, but the opposition seems to believe that this would be the best way to avoid a fourth election.

So Bibi, as he is affectionately called, took to the airwaves for a press conference.  He held a press conference that was nationally televised.  He went through the math as he sees it.  He said that there were 58 votes for the "Israeli, Jewish, Zionist right."  On the other hand, he argued that there were only 47 for the "Israeli, Jewish, Zionist left." (He included Lieberman).  He  noted that the Arab party had won 15 seats but he marked a big X through that number and said that they effectively did not count.  (See photo above).  Even though these seats represented 15 democratically, legally elected members of the Knesset.

He then said that "we won this election and we are not going to allow anyone to steal it from us."

Very strong words indeed.  Especially coming from someone who has lost - 62-58.

With all of that having taken place, we are now left with trying to figure out what comes next.  I have to say that I really have no idea.

Here are some options:

1.  Netanyahu and the Likud could  convince 3 or more Knesset members to "defect" from their parties and join him to allow him to form a 61+ seat majority.  This seems quite unlikely right now.  It would require some members of the Blue and White party or the AMG to join him.  While there may be some Blue and White party members who are ideologically close to Bibi, I just don't see them moving over at this time.

2.  Netanyahu could negotiate some kind of coalition with Blue and White.  I can't imagine that they would give him the immunity he is seeking and this might involve a rotation of Prime Ministers.  Seems unlikely right now but anything is possible.

3.  A fourth election.  Even though it makes no sense and seems  unlikely to resolve  anything, it may well be a possible outcome.

4.  Netanyahu forced to resign as a result of a left-sponsored bill that bars him from being Prime Minister while under indictment.  This would allow Likud and Blue and White to reach a coalition deal fairly quickly.  It seems to me that this might happen after a fourth election but not necessarily now.

In the meantime, Israel has no real government, only a caretaker government with limited powers and a limited budget.  Many government operations are underfunded and being neglected.  The country needs a government but there is no obvious solution as to how that is about to occur.  Especially given the political deadlock.

The next few weeks will be fascinating politics.  We can only hope that sooner or later Israel will have a stable government.  Unfortunately, it is hard to see how that will take place in the near future.

Posted by Ranana Reveller at 5:17 PM