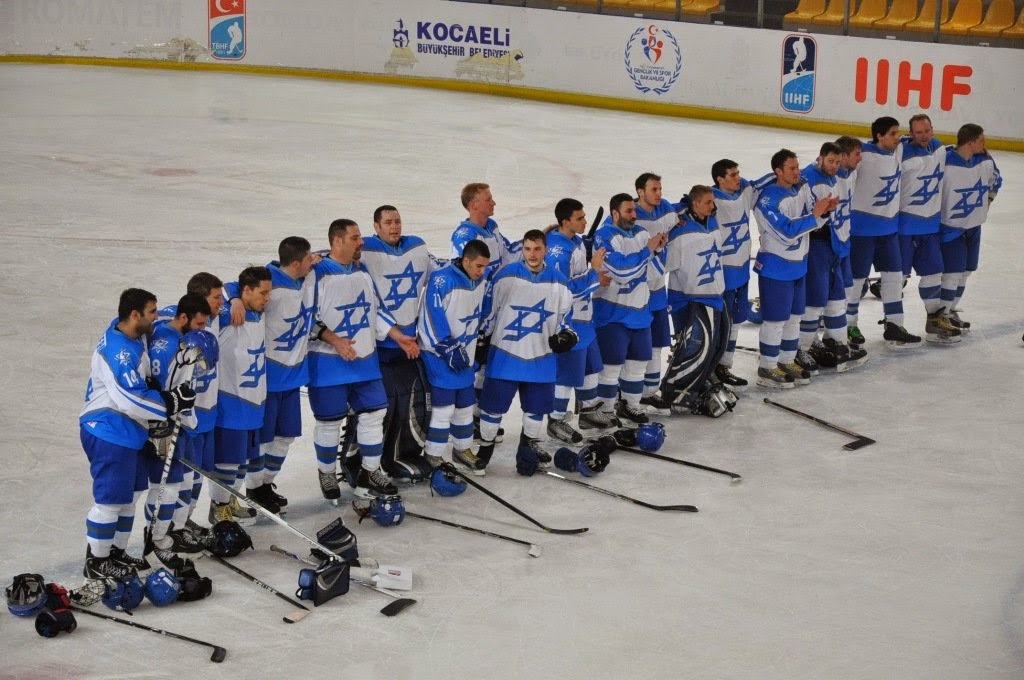 The Israeli national mens' ice hockey team recently played in the International Ice Hockey Federation's world championship - Division II, Group A.  This division meant that Israel was playing with teams ranked 29 to 34 in the world.

Just getting into this tournament had been a big accomplishment for Israel.  In 2013, the Israeli national ice hockey team won the Division II Group B tournament.  The winner each year moves up to the next division and the last place team is relegated one division down.

Israel started the tournament on April 9th with an exciting 4-3 win in overtime against Australia but then lost 10-6 to Serbia on the second day of the tournament.  On April 12th, Israel suffered a heartbreaking loss to Belgium - 4-3 in overtime. The toughest game of the tournament was a 16-4 loss to Estonia, the eventual group champions.

On the final day of the tournament, Israel still had a chance to remain in Group A.  It faced Iceland.  With a win, Israel would remain in the group for the 2015 tournament.  After three periods and overtime, the game was tied 3-3.  It went to a shootout.  The second Iceland shooter scored. Israeli star Oren Eizenman hit the post.  The game was over and Israel finished last in the group despite having been very evenly matched against three other teams.

Israeli forward Daniel Erlich tied for third in scoring for the tournament with 2 goals and 8 assists for a total of 10 points.  The leading scorer, Robert Rooba of Estonia had 14 points.  Israeli players Eliezer Sherbatov, Daniel Mazour and and Oren Eizenman placed 8th, 9th and 10th respectively in scoring.

Overall, this was a disappointing result for Israeli ice hockey.  The team proved that it belonged in the division.  It won one game and lost two in overtime.  It also lost a reasonably close game to Serbia.  Unfortunately, the two overtime losses left Israel one point behind Belgium.

Israel will now be relegated back to Group B of Division II.  Competing teams will also include Mexico, New Zealand, China, South Africa and Bulgaria.  The Group B winner this year was Spain which will move up and take Israel's spot in Group A.

If the Israeli team can put together a similar roster, it will be well positioned to win Group B next year and move back to Group A for 2016.  It will probably face its toughest competition from Mexico.  I am not sure of the dates or location for the 2015 tournament - but it will take place somewhere in Europe in April or May of 2015.

The Israeli players deserve hearty congratulations for their strong effort.  They played  four very close games, three of which went to overtime.  They were only outmatched in one of the games.  Hopefully the Israeli national ice hockey program can build on the play of this team and advance further in the coming years.  It will probably help that Israel now has an ice rink in Holon that the players can use for practices - which is much closer to the centre of the country than Israel's only olympic-sized facility in Metullah.

Ice hockey is still a long way from mainstream in Israel but I think it is bound to become somewhat more popular over time.

Posted by Ranana Reveller at 4:50 AM