Son of Hamas by Mosab Hassan Yousef - A Review 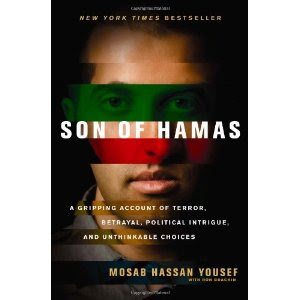 Mosab Hassan Yousef is a former Hamas member who began working for Israel while living in Ramallah. He eventually converted to Christianity and left Israel to seek political asylum in the United States. He is now living in California.

Yousef's book Son of Hamas is an autobiographical account of his life growing up in Ramallah. Yousef's father, Sheikh Hassan Yousef, was one of the founders of Hamas. Yousef, the oldest child, with five brothers and three sisters, traces his life growing up in Ramallah. He provides a detailed discussion of a very observant Muslim lifestyle in which he was raised. His book, written years after these events, is highly critical of Islam and, in particular, as Yousef sees it, of the propensity for violence that is taught and expected of children, even from a very young age.

Arrested as early as age 10 by Israelis for throwing rocks at settlers, Yousef became increasingly radicalized as he grew older. He was arrested by age 18 after purchasing guns that he intended to use in some type of operation against Israelis. During the first part of the book, he is highly critical of Israel and of the manner in which Israel treated his community. He justifies his early activities and details his arrest and alleged abuse at the hands of Israeli soldiers and officials.

As the book progresses, Yousef details the increasingly violent and dangerous escalation of the conflict between Israel and the Palestinians between 1986 and 1997. He begins to question some of the Palestinian tactics and is particularly upset at the Palestinian decision to support Iraq after it invaded Kuwait in 1990. He details the corruption and moral bankruptcy of the PLO leadership and Arafat and describes how Arafat, in particular, was concerned more with lining his pockets than of advancing the cause of the Palestinians. He writes about the PLO's covert but direct support for terrorist attacks against Israel, even while the PLO was publicly renouncing violence. And he describes the horrific Hamas suicide bombing attacks that were carried out in Israel, killing large groups of civilians.

Yousef's father was in and out of Israeli prisons for his own role in inciting or participating in terrorist activities. Yousef himself was a senior member of Hamas. Yousef claims that he began to have doubts about Islam and about Hamas as he watched Hamas carry out these horrible attacks against civilians. He was also troubled by Hamas' brutal vigilante justice against any perceived traitors, many of whom were often innocent.

Yousef claims that in 1997, he agreed to work for the Shin Bet, and become an informant. Known secretly as the "Green Prince," Yousef details how he provided information to Israel that led to the prevention of suicide bombings and assassination attempts. He claims that he provided information to Israelis only if they agreed to arrest rather than kill those about whom he provided information. According to Yousef's account, he seems to have been instrumental in almost every single Israeli counter-terrorism operation between 1997 and 2005. One gets the sense that his account is somewhat exaggerated. Yet he claims it was all with the goal of reducing violence in the region and had nothing to do with the significant sums of money he was paid.

By 2000, Yousef, had been introduced to Christianity, to which he converted by 2005. In the process of converting and ultimately revealing his collaboration with Israel, Yousef's father disowned him. Yousef was eventually granted political asylum in the United States, with the evidentiary support in court of the Shin Bet agent who had worked with him over a number of years while he was in Ramallah and with whom he remained friends after these events. Much of the later part of Yousef's book is filled with his description of the oversimplified version of Christian religious dogma that he came to accept and embrace.

Yousef's story is an interesting one and there is certainly a great deal of information of about Hamas, its activities and the activities of the PLO that make for fascinating reading. It is at times highly critical of Israel and challenges Islam repeatedly. The earlier sections of the book provide a thoughtful description and Palestinian viewpoint of day to day life in the late 1980s and early 1990s.

At the same time, something just doesn't sit right about Yousef's account.

At times, he appears to suggest that his activities were all related to his conversion to Christianity. He finally saw the light and decided to adopt non-violence as a political viewpoint. According to Yousef, it seems, if all of the Jews and Muslims would simply convert to Christianity, there would be peace across the Middle East. Of course that doesn't sound very realistic. One wonders if Yousef's change, and his eventual conversion, has much more to do with finding a way to escape from his overbearing, fanatically religious father.

Certainly, Yousef's story is not a model for bringing peace to the region. One would hope that Muslims and Jews, without the fanciful prerequisite of being required to renounce their families and religious affiliations, could find ways to sit down and negotiate a peaceful co-existence. Maybe this is just as a unlikely as Yousef's proposed solution, but we have to remain optimistic.
Posted by Ranana Reveller at 7:43 PM