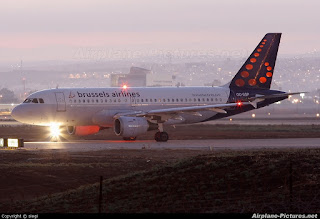 In my never ending search to find the best way to fly back and forth between Tel-Aviv and Toronto, I tried something different. Using Expedia, I put together a mix and match flight. I flew from Tel-Aviv to Toronto via Brussels, with a direct flight back to Tel-Aviv on Air Canada.

As I have explained previously, Air Canada only offers three flights a week from Tel-Aviv to Toronto. All three flights leave around 12:30 p.m. and arrive in Toronto around 6:30 p.m. That means 12 1/2 hours of daytime flying time on route back. Secondly, they currently fly on Mondays, Thursdays and Saturdays. For me, that leaves Monday or Thursday, neither of which are particularly appealing. It would be much better if they were to fly direct on Saturday and Sunday night from Israel to Canada. But the only Star Alliance partners to offer this alternative are Continental and US Air, and the fares for these flights are often significantly higher.

So I took this crazy flight. It left Tel-Aviv on a Saturday night around 1:20 a.m. That part of it was fine. We arrived in Brussels at about 5:10 a.m. The plane was comparable to Austrian Air's service between Tel-Aviv and Vienna. They had wafer thin chairs cramped closely together. No in-flight entertainment of any kind. And of course, since airlines are now charging for baggage, the passengers all tried to cram as much luggage as they possibly could into the passenger compartment.

I had ordered a Kosher meal and I was served a sandwich of questionable origin and unidentifiable content. But I wasn't particularly hungry at 2:30 a.m. anyways, so it wasn't a big deal. The flight was uneventful and arrived slightly early in Brussels.

I have to say that I enjoyed the Brussels airport. I found it to have a "warmer" feel than the airports in Frankfurt or Vienna. There was a decent lounge, equipped with a nice espresso machine and a selection of croissants. The staff were quite friendly and ensured that I had internet access and the right adapter for the electrical sockets. The difficulty was that the lay over time between flights was 5 hours. So I wound up having to spend about 4 hours in the Brussels airport lounge and the various duty free shops.

On a positive note, the prices in the duty free shops were quite reasonable. They had some great chocolate and a nice selection of single malts. But 5 hours is an excessive time to have to wait for a connection.

The flight back to Toronto was an Air Canada flight which left Brussels at about 10:20 a.m. Its route included a stop in Montreal, which added yet another irritating layer to this flight schedule.

I was lucky enough to get an upgrade so I managed to sleep for a while during the course of this 8 1/2 hour flight. The only complaint I have about this part of things relates to the food.

I had ordered the Kosher meal. This was singularly the most horrible airplane meal I have ever ever had the misfortune of receiving. First, the staff brought out a tray with three small plastic containers, each with an aluminum seal. The first container was a tuna fish compound. I have no idea what was mixed with the tuna or how long ago the atrocity took place. It came with three large crackers. I had a quick sniff and tasted a tiny flake of it. There was no way I was going to eat this stuff. 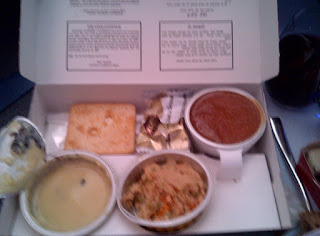 The second container was labeled tapioca. It was easily as offensive and even less edible than the first container. So now I'm 0 for 2.

Container number three contained red, super sweet, apple sauce. Perhaps it had been mixed with raspberry flavouring or maybe it was just red dye. I"ll never know. I only know that it was not something anyone other than a three month old baby would really want to consider eating.

Finally, the piece de resistance arrived, the hot component of the meal. Lucky me, I was finally going to get something to eat. When I opened the multi-layered aluminum sealant, I found something that resembled a big square hunk of meat loaf. But it didn't look or feel like beef. It might have been chicken... though it had the texture of tofu. In any case, it was simply rancid.

I note that I had asked the staff if there was any chance of getting the regular European Sea Bass meal - or the vegetarian lasagna. Both were sold out and I couldn't eat the chicken or beef alternatives. So I was left struggling with this grotesque culinary faux-pas.

With about two hours left in the flight, the attendant came around and served, believe it or not, a second helping of the entire first meal, minus the simulated meat loaf. Great way to lose some weight.

On arriving in Montreal, we had to take everything off the plane, collect luggage, pass through immigration and customs and then wait for about another hour and a half to get back onto the plane. I finally arrived in Toronto at about 3:20 p.m., having left for the airport in Tel-Aviv approximately 24 hours earlier.

Overall, this was less than an ideal way to fly, though it was certainly inexpensive. And despite the length of the flight, it was probably still more enjoyable then flying through Vienna or Frankfurt, both of which mean getting to the airport in Tel-Aviv at 3:30 a.m. and still arrive in Toronto at about the same time.
Posted by Ranana Reveller at 8:10 PM