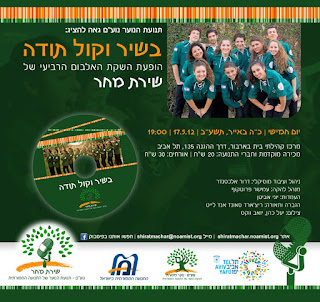 Shirat Machar ("Tomorrow's song") held a CD launch concert last night at Beit Barbur in Tel-Aviv. The concert was attended by several hundred people and was a great musical success.

Shirat Machar is an Israeli vocal group, something like a Glee-type show choir, but with much less extravagant production. The group is comprised of teenagers from all over Israel who are part of the Noam youth movement. The executive producer of the group is Dror Alexander, a well known Israeli musical producer who has produced Dudu Fisher's performances and has been involved in major broadway productions that have been staged in Israel.

Potential members audition for the group each year as the older members graduate high school and begin compulsory military service. This year, Shirat Machar was made up of 11 young men and women, all in high school from grades 9 to 12. Led by Amishar Frutkoff, the group practised weekly (and sometimes more often) to prepare for a number of different performances that it held during the year and to record Shirat Machar's 4th CD. Group members travelled from different places to attend practice sessions in Jerusalem, Tel-Aviv or, sometimes, at members' homes in different locations.

As part of Noam (Israel's Conservative Jewish youth movement), Shirat Machar members are all involved in Noam, whether as counselors, educational staff, camp staff or coordinators. Somewhat of a blend between Scouts and USY (United Synagogue Youth - the North American Conservative Jewish youth movement), Noam runs weekly programs all over Israel. It also organizes a number of annual trips ("tiyulim") which can include desert or mountain hikes, camping, and water activities. The highlight of its calendar is a summer camp program that runs annually in July. Noam's events always include educational activities and egalitarian religious (Conservative) services. Noam emphasizes egalitarianism, Jewish heritage and tradition, Zionism, and, most importantly - "tikkun olam" - making the world a better place. This can mean becoming involved in community activities, social welfare projects or other programs that allow Noam members to help others and to build a better world.

Shirat Machar was established four years ago to be the musical ambassador of Noam. It performs at most major nationwide NOAM events and has also performed in the United States and at the annual national Masorti movement assembly in Israel. This year, Shirat Machar performed at a dinner at the latter event, which was attended by Israeli President Shimon Peres. As President Peres began his speech, just after a Noam musical number, he commented about how proud he was to see young women and men singing together in this type of group after recent media reports of attempts by ultra-orthodox Jews to prevent women from singing in public.

Like any organization, Shirat Machar is not without its challenges. The group has been funded by Noam and by the Masorti movement in Israel. Masorti Israel has been facing significant financial challenges and as a result, it has had to cut some programs. At this point, the Masorti movement has announced that it will not be able to continue funding Shirat Machar, which could mean that this would be its final year.

The annual funding required is approximately $18,000 (Canadian - or U.S. -the difference is minimal these days...). While members each pay an annual fee, the $18,000 has historically been provided by the Masorti movement and Israel. At this point, Shira Machar is looking for sources (or even just one source) for funding for the coming year (2012-13). Interested sponsors in Canada can donate money to the Centre for Masorti Judaism http://masorti.ca/donate.html and can earrmark the money for Shirat Machar. Sponsors from the United States can do that same at http://www.masorti.org/donate Full tax receipts are provided by both sites.

While my blog is generally not a fund raising vehicle - and in fact - it currently does not include any advertisements - it seems to me that this is a very important project with a relatively modest funding request. Music is such an important part of Jewish tradition. Getting young people involved musically is often a path to continued and increase involvement in a range of areas. With Shirat Machar's emphasis on music and on Noam values, the members of Shirat Machar are ambassadors of the Conservative movement in Israel and worldwide. The group touches Noam members throughout Israel who see and hear them perform and it also helps further the values of egalitarianism, Judaism and tikkun olam.

Please pass this along to anyone you know who might be in a position to make a contribution or who might have a suggeston. Shirat Machar is a non-profit choir. We hope that its name, "Tomorrow's Song" will ring true and that Shirat Machar will continue in the coming years.

For more information or to see pictures and video clips, please visit the web page... https://www.facebook.com/ShiratMachar

Posted by Ranana Reveller at 5:56 AM