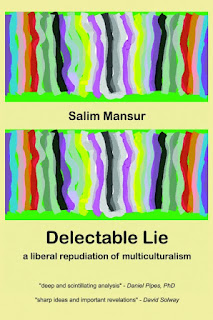 Is multiculturalism in a liberal democratic country a flawed policy? Salim Mansur makes that argument in his recent book Delectable Lie: A Liberal Repudiation of Multiculturalism. The book is thought provoking and contains a considered review of the works of many different writers and thinkers in a broad range of disciplines, including, primarily, philosophers and political scientists. Ultimately, however, the attack fails unless you accept Mansur’s definition of multiculturalism. Otherwise, Mansur’s book can be read as sounding the warning bell about a number of different issues that justifiably need to be addressed. But if the reader does not accept Mansur’s initial all-encompassing definition of multiculturalism, the rest of Mansur’s argument falls short.

Mansur’s primary argument is that individual freedom is the primary hallmark of a truly free society and that any imposition of equality rights cuts into true “freedom.” Perhaps tellingly, he starts with the idea that “all men are created equal.” So who is really free under that vision of freedom? Men only? White men only? Struggling to get around this problem, he posits a “correction” to this liberal theory and notes that both the emancipation of women and the elimination of slavery and black/white discrimination were “corrections” to the principle of liberty that was defined originally but had otherwise fallen somewhat short.

In providing a list of truly free countries in the world today, Mansur includes the U.S., Canada, Australia, New Zealand, countries of Western Europe and Israel. What makes these countries so free? On the one hand, Mansur is correct that they value fundamental freedoms including freedom of speech, religion, a free judiciary and other freedoms. On the other hand, these countries also aim to protect and promote equality, including equality of opportunity, regardless of skin colour, gender, religious or cultural heritage, background or other characteristics. In some ways, it can be argued that these countries are truly “free” because they are multicultural. Anyone, regardless of his or her religious or cultural background, gender, colour or other personal characteristics, whether shared with a group or not, can participate equally in a truly free society.

Interestingly, Mansur includes a quote from the late former Prime Minister of Canada, Pierre Trudeau citing one of the purposes of multiculturalism:

This does not really seem that objectionable. Yet Mansur argues that the recognition of the importance of any group or collective rights is “flawed.” Does that mean that all minority religious practices should be banned? Mansur does not propose this, though it might be the logical conclusion to his line of argument.

As the book develops, Mansur turns his attention to those who would take advantage of multiculturalism and use it to destroy a multicultural society. He argues that “host countries in the West readily provide welfare to those, such as radical Muslim priests and Islamists who brazenly ridicule and preach hatred for liberal democracy and the culture of freedom that separates the West from the cultures of the East and, in particular, the world of Islam.” This is certainly an issue that all of the “free” countries listed by Mansur must grapple with, especially those with significant immigrant populations. However, it is not answered by the idea that free countries should simply eliminate their tolerance of different minority practices. Countries like Canada can and do draw lines, even where the placement of the line is contentious.

Mansur discusses the paramount nature of free speech in a democratic country with references to various writers from Mills to Rawls. In discussing some of the threats to free speech and the abuses of it, Mansur writes about the “insidious threats” that freedom of speech faces. Specifically he refers to the 2007 U.N. resolution to combat the “defamation of religion” and prohibit “blasphemy.” Or the Danish cartoon incidents. Or the fatwas over Salman Rushdie’s The Satanic Verses. He also cites the trial of Geert Wilder for his documentary Fitna, the human rights commissions’ battles involving Ezra Levant and the use of human rights legislation and mechanisms by the Canadian Islamic Congress to attack Mark Steyn’s writing.

These are all frightening examples of the use of free speech or limitations on free speech by those who would limit many other freedoms. But this is not a general problem of multiculturalism, which strives to accept a range of diverse cultural practices within a liberal democracy. These are extreme threats. To fight these threats does not mean that countries must abandon multiculturalism.

Canadian courts, including the Supreme Court of Canada, have issued decisions in a number of areas that support multiculturalism. To name a few, Canadian courts have permitted observant Jews to put up Sukkoth (temporary huts) during the festival of Sukkoth in condominium units that prohibit balcony structures; they have permitted Sikhs to wear turbans as police officers; they have upheld the right of seventh day Adventists and other Sabbath observers not to work on their Sabbath. There are many other examples. All of these decisions would likely be viewed by Mansur as promoting and supporting multiculturalism. Yet, they are aimed at ensuring that Canadians from different backgrounds can participate fully in society. There is nothing “insidious” about that.

Mansur’s real target is fundamentalist Islam, not multiculturalism, though he disguises it. He attacks the “root cause” apologists for 9/11 such as Noam Chomsky and Linda McQuaig, who he argues “shift responsibility for the Islamist terrorists to the socio-economics of capitalist-imperialism.” He cites Muslim authors who call for Jihad and rail against certain western values like gender equality. He attacks Sharia law and the possibility of any western countries incorporating components of Sharia law into their systems and the dangers that might present. “Espousing acceptance of other cultures, irrespective of how such acceptance diminishes liberal democracy’s unique set of values” will destroy liberal democracies, he argues. Mansur is certainly correct that many tenets of Islam, as he describes it, such as gender inequality, Jihad, and discriminatory treatment of non-Muslims clash with liberal democratic values. But that does not lead to the conclusion that free countries should simply become intolerant of Muslims or of all Muslim practices.

Along the way, Mansur denounces dual citizens, liberal academics who blame the west for the state of the less developed non-European countries and any restrictions on free speech. But he backtracks slightly at the end of his book, arguing that there is no basis for ethnocentric prejudice by the majority population and no need to reject the cultural norms of their minorities. However, if any such practices collide with the core values of a liberal democracy then that aspect needs to be reformed or rejected accordingly. Mansur does not explain what he would do about the practices or beliefs of the Catholic Church, many Christian fundamentalist groups or others who would not accept his self-defined “core values of a liberal democracy.”

Ultimately, while Mansur demonstrates convincingly that free countries must carefully consider where they draw the line over which cultural practices to accept and which to prohibit, he fails to prove that countries should simply adopt intolerance of multiculturalism as the only appropriate means of remaining free.

Posted by Ranana Reveller at 6:08 PM