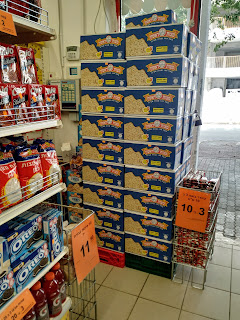 This picture was taken earlier this week.  Just after Purim ended, the Matzahs arrived - signalling the pending arrival of Passover (Pesach).  Stores here don't seem to go as crazy as the stores in Toronto with Kosher sections.  They don't cover the shelves with paper or otherwise close off the "Kosher  for Passover " areas hermetically.  But they do carry quite a variety of products.  And just as Pesach arrives, they actually seal off all of the  non-Pesach products so you can't even buy them for 7 days unless you go to an Arab area or a part of Israel in which the stores are willing to take their chances with law enforcement.  It doesn't really affect us since we observe the holiday but some people go out of their way during  Pesach to drive to a nearby Arab down and have some pita and humus.  For the most part, the only "pita" you can get in many parts of Israel during Pesach is made with potato flour (sometimes corn flour for the kitnyot eaters) and it may not be particularly tasty.

This year, as Pesach is about to arrive, we have quite a bit going on in Israel.  As you may know, we have an election scheduled for March 23, 2021.  It will be the fourth election in the past 3 years and, if the polls are to be believed, it is unlikely to result in a stable government.  So we may face a fifth election soon enough.

There are 14 parties runnning for election in the 120-seat Israeli Knesset.  Israel has a proportional election system in which everyone simply votes for the party of their choice.  There are no ridings, districts or other divisions of the country.  The cut-off percentage for making it into the  Knesset is 3.5%, which ensures that a party has 4 seats if it makes it into the Knesset.  If a party that is running winds up with less than that, their votes are simply allocated on a percentage basis to the parties that made it in.

At  this point in time, Prime Minister Netanyahu ("Bibi") and his Likud party are  the clear front-runners with most polls estimating that they will get between 28 and 32 seats.  After that, the fun begins.  To form a government, the party must come up with a coalition of at least 61 seats to have the confidence of the Knesset.

Bibi can count on the support of both of Israel's ultra-religious parties - Shas and United Torah Judaism.  Both parties have pledged their eternal loyalty to Bibi in exchange for promises to fund yeshivas, support the ultra-religious establishment and ensure that the ultra-religious have key cabinet portfolios.  Shas has been running campaign adds that compare Bibi to the Messiah and claim that a vote for Shas is a vote for the Kadosh Baruch Hu (a vote for God).  These two parties combined are likely to get between 14 and 16 seats.  So that means that Bibi has between 42 and 48, depending on how things go.

After that, things get a bit murky.  There is a new, merged, far-right national religious party running, the Religious Zonist party ("RZ").  They are running close to the cut-off line in most polls but if they make it into the Knesset, they could wind up with 4 or 5 seats and they will happily support a Likud government.

This means that Bibi  could now be at between 42 and 53, depending on whether the RZ party makes it in and the general results.  Here, the options become challenging but not insurmountable.

One party that  is polling at between 10 and 13 seats is the "Yemina" ("Right") party, led by Naftali Bennett (a fellow Ra'anana resident).  (Though he lives on the "other side of the tracks," having made his fortune by selling shares of a successful high-tech company).  Bennett has stated that he would like to replace Bibi and become the Prime Minister.  At the same time, his attacks on Netanyahu have not been particularly vociferous.  His party is self-described as a solid right wing party - nationalist, pro-religious, free-market and in favour of signficant changes to the judicial system in Israel to limit the power of the Israeli Supreme Court. For the most part, his party is a natural ally of the Likud party and is likely to join Likud under the right conditions.

This means that with all of the above, Likud could be at between 52 and 66.  If they are over 61, they will almost certainly form a government under  Netanyahu's leadership.  Such a government would be made up of Likud, Yamina, RZ and the two ultra-religious parties.  It would be one of the most right wing governments in Israel's history.  It is likely  that this  government would agree to pass legislation granting Bibi immunity from his ongoing criminal proceedings.  It would also proceed with various right wing policies dealing with the Palestinians, issues of religion and state, limiting the power  of the courts to conduct judicial review  proceedings and  many other areas.  One commentator stated that this type  of government would put Israel somewhere between Hungary and Turkey - on a path towards fascism but not quite there.  Perhaps that anyalysis might be a bit extreme.  But from my perspective, this type of government would be very frightening.

If this collection of right  wing political parties winds up at between 52 and 59, things get really interesting.  They may be unresolvable and simply lead to another election.  But  again,  the actual numbers will be key.

If this "bloc," including Bennett winds up with 56 or less, they will have a very difficult time forming a  governmment. They would have to convince one of the other left or centre parties to  join the bloc, even though the other  parties have all vowed that they would not do so.  Bibi's options here would include convincing a 4 or 5 seat Blue and White party to join him, the "New Hope Party" which is made up of  former Likud members or, perhaps the Labour party.  Bibi has a formidable knack for working these situations out.  He would  play the different  parties against  each other and do whatever it takes  to get to 61.  Ironically,  he may  even  find a way to rely on a small 4 or 5 seat Arab party "Ra'am" that could make it in to the Knesset.  It is hard to imagine that  such a hard-core, far right government would agree to be beholden to a small anti-Zionist Arab party but Bibi is definitely willing to do whatever it takes to stay in power.

If he is able to do this and  create a coalition but  with parties  other than the "right-wing" parties, he may not be able to get his immunity bill passed.  And the other parties might temper the right wing agenda.   So this may be a slightly better alternative than the first scenario.

Given the current polls one of these two scenarios seems to be the most likely outcome of the coming election.

The chance of the "anti-Bibi" parties  forming a government looks slim.  The Yesh Atid party is the current leader of this bloc and is running at between 18 and 21 seats.  They could, perhaps, count on the New  Hope party to join them, which could  add 9 to 12.  Add in the Labour party (4-7), the Israel Our Home  Party (7-9).  That all adds up to between 38 and 49.  If the left wing Meretz party passes the threshold with 4 or even 5 seats, that could get this bloc to 53 or 54.  Maybe they could also add in Blue and White, if it passes the threshold, with 4 or 5 seats.  On the low side, all of this only adds up to 46 seats.   On the high side, it adds up to 57.   But some of these parties are competing against  each other for votes, so it is unlikely that the number  would be as high as 57.

Assuming this  "left-centre bloc"  obtains between 50 and 55, there would be two possible scenarios for forming a government.  One would be to rely on the support of the Arab party - the "Joint List" as supporting the  government from the  outside or as actually joining the government.  It is not clear that all of these bloc members would agree to this arrangement. In particular, the New Hope party may not agree.

The other possibility would be to convince the Yamina  party to join the group.  As discussed above, they are idealogically much more  comfortable with Bibi.  Bennett seems to feel that he can offer his party's  support  to this bloc in exchange for  an  agreement that  he becomes the Prime Minister.  But negotiations over policies in this scenario would be extremely complicated and in my view, close to impossible.  Alternatively, he could  agree to join  a Lapid-led government in exchange for getting some fairly senior posts for himself and his senior party members.  This all seems unlikely unless Bibi's numbers are low enough to convince Bennett that he has no choice.

Lastly, there is a distinct chance that the split will be close to 50-50  and  no one  will be able to form a government.  We will then face the prospect of several weeks, if not months, of negotaitions, all while Israel is led by another  interim caretaker government.  Unfortunately, this sounds like a distinct possibility.

To add to all of this, the election is just three days before Pesach.  Everything closes down in Israel for  Pesach.  We  may not even have all of the official results of the election by the start of the holiday.  Buckle up - we are in for a very turbulent  period.

On the positive side, a large percentage of the Israeli population has now been vaccinated with both doses of the Pfizer vaccine.  The numbers of newly infected Israelis are dropping rapidly.  More importantly,  the numbers of people  who are  becoming seriously ill are also dropping.  Things have been opening up since Purim (Feb 25, 2021). Even after about two weeks  of many places opening up, the new infection rate has not skyrocketed as some predicted it might.

Bibi is putting  all of his eggs in the vaccine basket  for this political campaign.  If the rate of infection continues to dwindle, he will try to take credit for getting Israelis vaccinated ahead of most other countries and argue that this is something only he could have done.  Bibi will say that nothing else matters  - his corruption, the economic policies of the past year or two, the ultra-orthodox-secular tensions, and many other difficulties.  Instead, he will focus on two areas - one is the vaccines and the other is the peace-deal breakthroughs that Israel has had with the UAE, Bahrain and  Sudan.  If Israelis buy what Bibi is selling, he  could wind up at 35-40 seats which would allow  him to form a new government quite easily.  So far the polls suggest  that this has not happened but  we still have almost two weeks to go.

I will try to put together at least  one more blog just before the election and perhaps a few afterwards, in between getting ready for Pesach.

Wishing everyone the best of health!

Posted by Ranana Reveller at 8:38 AM 2 comments: