Muslims around the world celebrated the holiday of Eid-al-Adha, commencing on Friday October 26, 2012.  The holiday commemorates the willingness of Abraham (Ibrahim) to sacrifice his son Ishmael and the willingness of Ishmael to be sacrificed according to God's will, although God intervened to provide a ram for the sacrifice instead.  Jewish people read a slightly different version of this story (akeidat Yitzhak - the binding of Isaac) in synagogues around the world on the second day of Rosh Hashanah and will read it again this Shabbat, November 3, 2012 as part of Vaeirah.

The Muslim custom for celebrating the holiday in many countries is to slaughter a cow, goat or sheep just before or during the holiday.  Millions of cows, goats and sheep are slaughtered around the world during Eid days.  Accidents are apparently common since many of the people buy the animal and bring it home for slaughter rather than taking it to a butcher.  Interestingly, this custom is not so far from home.  Many Yemenite Israeli Jews and other Israeli Jews from middle eastern countries buy goats or sheep and arrange for their slaughter just before the major Jewish holidays - Rosh Hashanah, Sukkot, Pesach and Shavuoth.  Some still arrange to have the Shochet (the ritual slaughterer) come to the house to take care of business although this is less frequent now than it once was.

Taking the bull by the horns and slaughtering the animal by yourself can be tricky business if you are not experienced.  According to YNet News, a Gaza health official reported that a Palestinian man was killed last week while trying to slaughter a cow himself.  Some other reports indicated that it was a bull.  YNet News also reported that 150 other people were hospitalized in Gaza due to knife wounds incurred in the process of slaughtering animals or from injuries caused by the animals to the would be butchers or to bystanders. 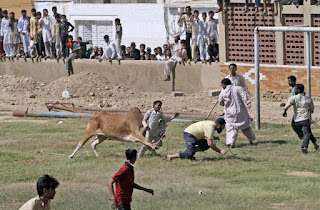 Other news agencies picked up this picture, apparently taken in Pakistan, of a loose animal attacking a boy on a soccer field during a failed animal slaughter attempt. Score one here for the bull.

Observant Jewish people often complain about the high cost of Kosher meat but perhaps there is a value after all in having the Shochet take care of the slaughtering, unless you have the proper training. Yemenite Israelis usually arrange for the slaughter of goats rather than bulls before the holidays and the handling of these relatively harmless goats is probably much less risky, from my personal observation.  For those still going ahead with the home slaughter - aside from wishing "Eid Mubarak" - (a "blessed holiday of Eid,") it is probably wise to add aman ("safe") to the greeting.