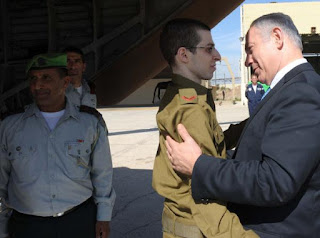 Gilad Shalit is back home and the first group of 477 Palestinian prisoners have been released. Some 550 more will be released over the coming months.

It has been a gripping and highly emotional day in Israel. News coverage began early in the morning and continued throughout the day. There was no other real news here in Israel. This historic exchange was one of those days – days that will stick out as historic – like the day of Kennedy’s assassination or the day the Twin Towers fell. A day about which people in Israel will ask each other for years – what were you doing on the day Shalit was released?

There was a thick cloud of apprehension throughout the morning. Would the deal go through? Would there be some kind of last minute hitch? Would Shalit really be alive and well? As the morning progressed, events unfolded as planned in the deal that had been reached on October 11, 2011. Convoys of Palestinian prisoners were driven from Israeli jails to various points for exchange. Israeli dignitaries and military helicopters were prepared. Worldwide press streamed to various sites.

As the morning unfolded, the events occurred as planned, mostly. The Palestinian prisoners, more than half of whom were serving life sentences for murder or other equally heinous crimes were released. Shalit was released to Egyptian authorities and was promptly interviewed in Egypt. It was almost surreal. Here was the Egyptian press asking Shalit if he would now commit to working to secure the release of the thousands of remaining Palestinian prisoners – trying to draw a moral equivalence between a captured soldier and thousands of convicted terrorists and murderers. He was quick enough on his feet to explain that he would like to see peace – and to see them released – if they agreed to end their armed struggle against Israel and to live in peace.

Shalit was handed over by the Egyptian authorities to the Israeli officials. He was given an Israeli army uniform and met with Israel’s Prime Minister before meeting his parents. He looked thin and pale. He had seen no sunlight for more than 5 years and was still suffering the effects of some shrapnel injuries that had never been properly treated. He seemed quite frail. There is much work ahead to bring him back to a state of good health.

At Shalit’s yishuv in Mitzpe Hila, in North Central Israel, there was palpable excitement. Many might have wondered whether they would have ever seen Gilad Shalit alive again. Shalit’s father called this the “happiest day of my life.” Residents of the Yishuv were in a celebratory mood.

But for many others throughout Israel, the mood was much more sombre. There was a sense of relief and thankfulness that Shalit was back home and free. But Israelis also had to watch scenes of hundreds of convicted criminals being released to wildly enthusiastic crowds in Gaza, calling on Hamas to kidnap “another Shalit” as soon as possible. It was not a day for celebration but a day on which an Israeli life was been saved – even at the cost of 1,027 freed prisoners, who had collectively been responsible for the deaths of thousands of Israelis.

Despite the calls by some for Hamas to try to capture new prisoners or commence a new wave of terrorist attacks, there was still a feeling that maybe this could be the first deal of a series. Maybe there are more negotiations to be conducted between Israel and Hamas, however indirectly. Maybe a deal can be reached that will bring stability and calm to the relationship between Israel and Gaza and bring hope to the idea that there really can be peace in the region one day – even if that day is still many years away.
Posted by Ranana Reveller at 6:02 PM No comments: