Ongoing War with Gaza and Implications for Israel-Iran 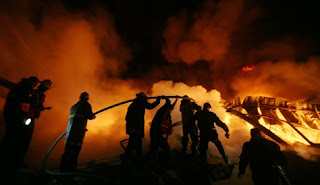 Since Friday March 9, 2012, more than 200 rockets have been fired from Gaza to various parts of Israel. These attacks have been aimed at Beer Sheva, Ashdod, Ashkelon and even the more northern city of Gedera. Israel has responded with a number of air raids on Gaza. Many Israelis have been injured in the rocket attacks. There are also estimates that more than 30 Palestinians have been killed in Israel's responding raids, some of whom were civilians.

The latest round of violence erupted after Israel assassinated Zuhair al-Qaissi, the secretary general of the Popular Resistance Committee. Al-Qaissi was linked by Israeli military officials to an August attack from the Sinai that resulted in the deaths of 8 Israelis and injuries to 40 others. Al-Qaissi was reportedly planning another similar attack.

Although the period leading up to this latest round of escalation has been described as a "period of calm," some 50 rockets have been fired at Israel from Gaza over the past two months, during this "truce." It's not very hard to imagine what the United States might do after receiving one or two rockets from Canada or Mexico, let alone 50.

Since the rocket attacks began last Friday, more than 200,000 children were forced to stay home as schools were closed across a large area of the Israeli south. Hundreds of thousands of Israelis missed work and there was significant property damage caused by the rockets.

The damage is generally viewed by Israelis as only a small fraction of what Israel might face if it were involved in an all-out war with Gaza, Lebanon (Hezbollah forces), Iran and potentially even Syria. Nevertheless, the psychological impact has been tremendous, particularly on those families living within range of these attacks. And despite these challenges, a solid majority of Israelis are apparently still supportive of Israeli preemptive action on Iran's nuclear facilities.

Israel has successfully deployed its Iron Dome anti-missile system to provide defence to these attacks from Gaza. The system has reportedly succeeded at intercepting a large number of rockets though the estimated success rate various widely. The Iron Dome is primarily intended to prevent rocket attacks on civilian areas and has had some success in that regard. Most of the rockets were allegedly fired by Islamic Jihad and some smaller offshoot organizations with public claims from Gaza that Hamas was not involved. One might be forgiven for being skeptical about these claims.

Although Egypt brokered a stated "truce" on Tuesday, rockets attacks have continued with at least 3 rockets fired at Beer Sheva earlier today (Thursday March 15, 2012). Both Hamas and Islamic Jihad have denied any responsibility, pointing to smaller "splinter" groups.

Israel's Iron Dome system is not an anti-ballistic missile system. Israel has been working on the Arrow ABM system, which is designed to intercept longer range missiles and rockets but it is not yet fully developed. The upshot is that Israel is likely to face very heavy rocket fire from a variety of geographic sources if hostilities break out with Iran. Such attacks will cause heavy structural and economic damage and may also result in a significant number of Israeli casualties.

The difficult calculation for Israel and its political leadership is weighing this heavy cost against the enormous costs of a potential nuclear attack from Iran. Given the very public statements made by Iranian leader Ahmadinejad calling for Israel's destruction, coupled with Iran's vigorous nuclear weapons program, it may well be too perilous for Israel (and for the rest of the world) to stand by and wait for this attack, even if by so doing, Israel can buy another few years of relative peace.

Israel's experiences in the second Lebanon War in 2006 and its various skirmishes with Gaza since than have suggested that any future war that Israel might face with its hostile neighbours will be markedly more damaging to Israel's civilian population than any of its previous wars. But the reality is that Israel is constantly facing an existential struggle which is only likely to dissipate when a real Arab spring arrives and brings with it widespread peace. Looking at what has been taking place in Syria, Iran, Gaza and even Egypt, the Middle East, unfortunately, is still stuck in the middle of a cold winter.
Posted by Ranana Reveller at 12:27 PM No comments: