The Israeli election will be held on March 23, 2021.  To get you ready for the election, I have come up with an LSAT  style problem that you could work on starting next week.  This problem may be so complex, depending on actual results, that I am giving you a head start so that you can begin working on it even before the election results are formally announced.

Just a refresher about the problem style.  To get into law school, you have to write the LSAT.   One of the sections is a series of logic questions.  Something like this:

There are 8 people at a table, A through H.

A hates B and C and would prefer to sit near F.

D will only sit between B and E and or between A and G.

C must sit directly across from E.

F and G must sit at least two seats apart from each other.

The table is a rectangle with 3 seats on each side and 1 on each end.

Which of the following statements is true?  (I'm not going to list all the statements). (Eg. F can sit next to E, G must eat Sushi, B cannot sit across from H, etc., True or False...)

I did reasonably well on the LSAT but that was a few years  ago.  Okay, many years ago...

The Israeli Knesset has 120 seats and you need a combination of at least 61 elected Knesset members to form a government.

A.   The Sephardi Ultra-Religious Shas party (Estimated to get 7 or 8) will only agree to a government formed by Likud (Bibi - estimated at 28-32).  They will absolutely not agree to go with Yesh Atid (Lapid)(Estimated at 18-22) or Yisrael Beitenu (Lieberman) (Estimated at 7-8);

B.  The right wing New Hope party (Saar) (Estimated at between 7 and 9) will absolutely not go with Likud.  However, they will go with just about anyone else other than the Arab parties (or maybe they will).

C.  The right wing secularist party Yisrael Beitenu will not go with either of the two Ultra-Religious parties, Shas or United Torah Judaism (Estimated at 7-8) but will go with just about any other parties, other than the Arab parties (or maybe they will).

D.  The centrist Yesh Atid (Lapid) will go with any other parties other than Likud and the far right Religious Zionist Party (Ben-Gvir) (Estimated at 4-5 if they make it in to the Knesset).

E. The left wing Labour Party (Michaeli) (Estimated at 5-7) and left wing secularist Meretz (Horowitz) (Estimated at 4-5 if they pass) will not go with Likud or the Religious Zionist party.  They will recommend Lapid and they might agree to go with Yamina (Bennett) (Estimated at 9 to 12) or New Hope.

H. The Ultra-Religious, Ashkenazi, United Torah Judaism (Estimated at 6-8) will recommend Likud.  They might join New Hope, Yamina or even Yesh Atid with the right offer.

I. The centrist Blue and White Party (Ganz) (estimated at 4-5 if they pass the threshold) say they will not go with Likud again....and that they will recommend Yesh Atid to form the government.  But for the right price, they might change their minds.  Though they swear they  won't.

J.  The Arab parties are unlikely to join any potential coalition formally.  However, they might support a government explicitly or tacitly from the outside or perhaps this could be one of the first times that they actually join the government.  As listed above, some of the parties including Yamina and Religious  Zionists insist that they will not join a government that is in any way reliant on the support of the Arab parties.

Starting on Tuesday night or early Wednesday next week, you can take all of this and try to figure out how to come up with a governing coalition agreement that has at least 61 members.  You have four weeks though you can apply for an extension of three more weeks.  You can offer any combination of cabinet posts, legislative promises, cash for constituents, future government posts and, pretty much any other enticements that  you think of to get the different parties to change their positions on who they are willing to sit with.  Remember, you don't necessarily have to commit  your promises to writing and, even if you do, you certainly don't have to honour them all later. 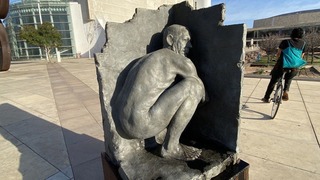 In other news, an anonymous group installed a statute of Bibi in central Tel-Aviv, looking like Golem from Lord of the Rings....Some have suggested it is a picture of Bibi in a prison cell.

No one has claimed credit and the statute was removed, fairly quickly.  It is not the first time that protest artists have unveiled statues of Bibi.   I'm not going to list all of the different interpretations that have been suggested of this particular sculpture.

In other news, restaurants across Israel are opened for business, the infection rate is rapidly declining, the rate of people becoming seriously ill is rapidly declining and the vast majority of new cases, including those who have become seriously ill, are people who were not vaccinated.  Things are looking very promising as the vaccine rollout continues.  This may translate to a very optimistic outlook for North America and other parts of the world that are properly administering the Pfizer and Moderna vaccines.  Not sure that these results  will apply to people innoculated with the other available vaccines or in cases where governments administer vaccines without following the proper timelines for doing so.

Pesach is 10 days away.  It is unusual this year with a Saturday night start which makes things that much more difficult for people who observe the holiday.  All of the dishes will need to be changed over one day early on Friday - and bread eating becomes an issue on Friday night and Saturday morning.  Although it is permissible, it gets a bit tricky where the hametz (leavened products) have already been removed from the house and symbolically burned.  I suppose we can eat some bread on the balcony just before the meal....

As you know, Passover is observed differently in Israel - only one Seder instead of two.  As of now, it looks like many people are planning to have large family gatherings, perhaps even "pre-Covid" size  and that plan is likely to be blessed by Bibi himself, along, of course, with his ultra-religious coalition partners, unless infection rates start increasing rapidly between now and next week.

I couldn't resist mentioning that one of the parties running in this election, the Shas party, has been using this lovely slogan "Choose God, Vote for the Shas Party."  They have also been proclaiming that it is a "Mitzvah" (a good deed, according to Jewish law) to vote for Shas.  The accompanying picture for these campaign slogans is one of the  former Rabbis and inspiration for Shas, Rabbi Ovadia Yoseph who died in 2013.  In Israel, we are used to seeing pictures of the deceased Lubavitch Rebbe, Schneerson, with the slogan "Long Live the Messiah," plastered on buses and buildings.  But Shas seems to have outdone the Lubavitch and actually linked Rabbi Ovadia Yoseph to God rather than to a mere messiah.

I guess we will see soon enough if the outstretched hand of the Lord will ensure that Shas and Bibi are able to form a government together and bless them all with "Get Out of Jail Free" cards so that they don't have to waste valuable time facing ongoing criminal proceedings.  It would indeed be ironic if the Lord were to bless the secular parties instead of the Ultra-Orthodox after such earnest supplications, but I guess His plan will only be revealed in the coming weeks, maybe months.  Either way, it is worth remembering that Pesach is the "Holiday of Freedom,"  which in this case could mean freedom for Bibi or alternatively, freedom for Israel from Bibi.  Israeli voters, observant and non-observant, believers and non-believers, Jewish and non-Jewish, will soon decide.

I will try to write one or two more  blogs over the next week or so with all of the exciting election news.  Wishing  everyone the best of health and all the best in preparing for Pesach or other upcoming holidays that you may be celebrating.