Day Trip Up North in Israel

So it is time for a distracting blog as opposed to one about  the  ongoing political situation or the battle with the Covid virus and its mutations.  After quite a long time of not travelling very much in the country, I thought I would write about a day trip that we took this past Sunday and a few of the highlights.  Call it a bit of a distraction - but maybe also some ideas for next time you are in Israel.  We had tickets for an evening concert up north, so we decided to make a day of it.

We set out in the morning to the Dalyat Al Carmel market, outside of Haifa. That is about and hour and 20 mintues from Ra'anana in decent traffic conditions  Apparently, the big day for the market is Saturday but that is not something that we would do on Shabbat - so we went on a Sunday.  This market is a market run by Druze Israelis.  The Druze are an Arab speaking minority group in Israel, who number about 100,000.  They do not identify as Muslims.  They serve in the IDF and participate in all facets of Israeli public life.  The market is quite similar to other Arab markets in Israeli including the market in the Old City of Jerusalem.   We wandered around in a variety of shops in the market area.  The shopkeepers were very friendly and welcoming.  We were offered coffee. We chatted with them.  They spoke about how difficult it has been over the past year and a half with the lack tourism.  We felt like we should buy something but weren't really looking for anything in particular.  In the end, we bought a few seat cushions that we could take to the concert we were going to later at a Roman ampitheatre.  More about that shortly.

We went to another place about twenty minutes away called the Bethlehem Spice Farm.  We were hoping for a bit of a tour and explanation but these days, with the lack of tourists, that is only available for tour groups of at least 10 or so that book in advance.  Instead, we wandered around the enormous spice store which featured bulk spices of every possible kind, mostly grown on site, apparently.  We sat and had a coffee at the coffee bar, which was quite tasty, accompanied by a pecan pie that was reasonably good - not overly sweet like many can be. 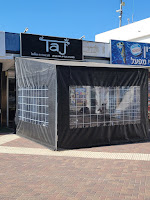 After that, we decided to look for someplace to eat that would be reasonably close to our eventual destination the "Shoni Ampitheatre in Benyamina."  We found a restaurant called Taj - a Kosher Indian restaurant in Or Akiva (under the supervision of the Or Akiva Rabbinate).

Taj is not exactly gourmet dining.  It is a small, family run Indian restaurant with a relatively short menu.  But the food was quite good and tasted quite authentic.  There was outdoor seating with a capacity of, perhaps, 15.  I understand that they do quite a bit of takeout business.  There was a mildly operational fan cooling us off a bit - though I have to say it was still quite warm. 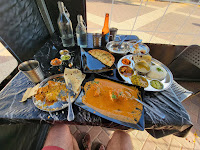 We ordered a vegetable Thali dish which came with a roti, a curried zucchini dish, dal (in this case, yellow lentils), rice and a variety of chutneys.  We also ordered a curried salmon dish and some large samosas.  The roti was quite good and really not too far off from the delicious rotis that I used to enjoy at the home of one of my very good friends, growing up in Toronto.  The prices were moderate.  The service was friendly and  prompt.  This was much more like one of the fairly fast storefront Indian restaurants, so abundant in Toronto, especially in the Leslieville area (Gerrard and Greenwood) than a sit-down full-service restaurant.  But then again, there really aren't that many options for Indian food in Israel and even fewer for Kosher Indian food.  A one-time Kosher Indian restaurant  in Jerusalem, that was situated in the Crown Plaza Hotel, has since closed.  The Tandoori chain, with a branch in Herzliah, is not particularly authentic tasting and is not Kosher.  There is a decent restaurant in Ashdod, called Namaste that is Kosher and serves good food.  It is a bit out of the way for those in central Israel but we have been there a few times.  All things considered, we enjoyed Taj and would be happy to go back at some point, especially if we are in the area.
We were quite full when we left, which is usually the case when you leave an Indian restaurant (in my experience) even though we really didn't order that many dishes.  We still had a few hours until our concert so we decided to head over to the ancient ruins at Caesaria and wander around there for a bit.  It was only about 10 minutes away from the restaurant.  We have been there many times and it is a great place to visit.  This time we were looking to take a short walk at the beach and then sit somewhere, have a drink and watch the sea for a bit.  We decided on the Beach Bar where we found just what we were looking for.

The Beach Bar is an aptly named spot that spans a fairly large area with some seats very close to the water and others further away but with a nice view.  We found some seats in the shade and looked for something very cold to drink.  Unfortunately, we were told, it was "too early" for the ice drinks - which only come out at  night.  Go figure.  So we went for some lemonade.  My highlight of the day was the drink menu, which featured a drink called  a "Crazy Trump" made with mango and passion fruit juice.  It was tempting but we took a pass.  We sat and enjoyed the  sounds of waves crashing against the shore barrier and watching the  sun slowly set, though we were still an hour or two away from actual sunset time. 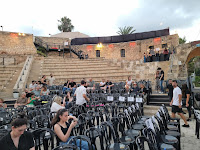 Our last stop was the concert venue itself.  We were off to the Shoni Ampitheatre in Binyamina, which is about 15 minutes away from Caesaria.   We were going to see Idan Raichel, a popular Israeli performer.  He often performs with a full 7-9 piece group but he is now doing a series of concerts by himself over the next few months at this outdoor ampitheatre.  He plays  piano, guitar, accordian (though he didn't play any accordian this time) and a variety of other instruments.  Many of his songs are fairly sombre, soulful and emotional.

The venue was first come first serve seating.  We thought we were going to be seated on the stone seats that fill the ampitheatre (hence the need for the pillows that we bought at the market). Instead, we

wound  up with second row seats on uncomfortable plastic chairs.  Raichel was great.  He told lots of stories in between songs, some of them were quite interesting.  For example, he said his 5 year old daughter asks him why so many people want to take a picture of him so often when they are walking around in the city.  He told his daughter that it is because he writes songs that people like to listen to.  So his daughter answered - if it is the music that people like - what use would they have for a picture?

He played for about an hour and a half with a couple of encore songs.  It was the first time that I had seen him live.  From the live videos I have seen, it would probably be better to see him with his full band - the "Idan Raichel Project" but this was still quite enjoyable.

I am going to save most of the political comments for another blog.  I don't have that much to say at this point.  The nascent Israeli government is still working out the kinks and the Bibi-led opposition is trying everything that it can to topple the government and re-install Bibi.  I have a reasonable level of confidence that this current Bennett-led government, as precarious as it is, will ride things out and stick around for a reasonable time period.

I have been staying up late (or getting up early, if you prefer) to watch  the NHL hockey playoffs.  It was a shocking but welcome surprise to see the Montreal Canadiens make it to the Stanley Cup finals, in a bid to become the first Canadian team to win the Cup since 1993 (when Montreal last won it).  Montreal barely squeezed its way into the playoffs and was a heavy underdog in every series it played.  Somehow it won the first three series and made it to the finals against the defending champion Tampa Bay Lightning.  I didn't have very high hopes - but maybe there would be another miracle.  Well, after the first three games, Montreal was down 3-0 and I couldn't bring myself to stay up all night last night with the prospect of watching Tampa take the Cup.  So I woke up this morning with the pleasant  news that Montreal had managed to extend the series.  I think only 2 or  3 teams in the history of the NHL (that spans more than 100 years) have managed to come back from a 3-0 deficit so the odds are heavily stacked  against Montreal.   But maybe I'll take my chances and see if they can extend the series once more on Wednesday night.  Miracles sometimes happen, don't they?

Israel is wrestling with a rapid spread of the Delta variant of Covid and the government is contemplating different restrictions, including bringing back the use of a "vaccination passport."  For now it is all talk as the government waits to see how many of the "positive" people actually become very sick.  For now, fortunately, the numbers of people  who have become very ill are still quite low and that is a positive sign, not only for Israel, but for every country that has managed to vaccinate a high percentage of the population as well as for those countries that are still hoping to do so.

Wishing everyone the best of health and enjoyment of the hot summer weather.

Posted by Ranana Reveller at 9:06 AM No comments: