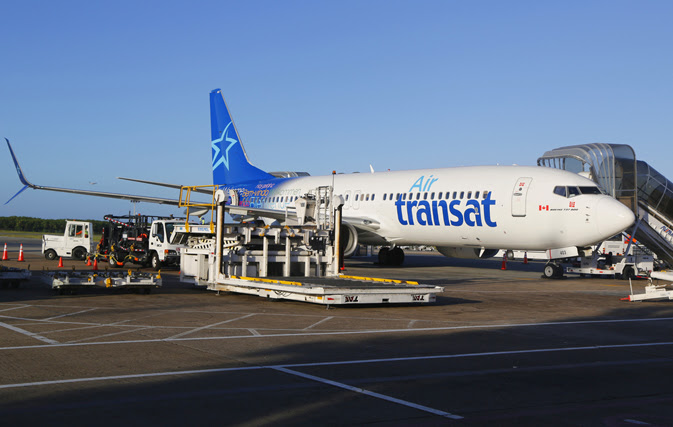 In my last blog, I provided a review of my first flight on Air Transat between Toronto and Tel-Aviv. I also discussed some of the engaging conversations I had on that flight.  You can read the previous blog here.

I thought I would add some information about the return flight to complete the circle.  It was much less eventful but if you are thinking about trying Air Transat, there is some more information that you might want to know.

As I mentioned previously, I had paid a relatively nominal additional amount to buy "Option Plus." This provided me with an additional baggage allowance (a second bag of 30 kg) as well as some other perqs.  It was also supposed to include "priority boarding."  However, as with most airlines, other than perhaps, Air Canada, there is no such thing as "priority boarding" when leaving Ben Gurion airport.  The Air Transat crew did not even bother to pretend that there was an orderly boarding system.  They simply announced that it was "boarding time" and the inevitable chaos ensued.

I also note that Air Transat was not able to provide me with boarding passes or baggage check all the way through to Toronto, even though everything was confirmed.  I could not check in online for both legs of the flight.  I later discovered that I wasn't the only one - it must be a glitch that hasn't yet been worked out.  So I was only able to get an advance boarding pass from Tel-Aviv to Montreal and had to get the second boarding pass on arrival in Montreal for the flight to Toronto.  Somewhat inconvenient.

The Tel-Aviv to Montreal flight leaves at about 9:30 a.m., though I think we were delayed by about an hour. The flight was about 11.5 hours total and was relatively uneventful.  The crew were excellent.  Friendly, readily available and attentive.  Many of them were trilingual, speaking French, English and Hebrew.  They were offering to help passengers with their Canadian customs forms and they were very social with the passengers.

There were quite a number of Ultra-Orthodox passengers, including many Lubavitch who must have been returning after their proselytizing tours of Israel.  However, unlike the Toronto to Tel-Aviv leg, I only saw one Chabad guy making his way up and down the aisles looking for potential Tefillin  layers.  He didn't come to me or anyone else in my row.  Maybe he had read my last blog.

On the other hand, there were a number of Chabad women, walking up and down the aisles, handing out books of Tehilim (psalms) to any women travelling with children and trying to get them to read a psalm or two.  I was sitting across from a secular Israeli woman who was travelling with twins (and her husband) and she willingly agreed to accept the book of Tehilim and start reading.  So I suppose Chabad felt that it must have saved  at least one soul on this flight.

Air Transat flies an Airbus 330 to Israel - so there were personal screens with movies, TV shows and other entertainment.  Headphones cost $9 so you probably want to bring your own.  Blankets are also $9 and you get to keep them and take them off the plane at the end of the flight.  They seem to be new.  They also sell blow- up neck protectors for $9.  Since I had Option Plus, I received all of these high end gifts for free as well as the eye mask that was thrown in.

I ordered an Asian vegetarian meal which was fine.  The crew came around and served sandwiches mid-flight, which were all kosher (smoked turkey or feta cheese sandwiches).  There was a third meal about an hour and a half before arrival in Montreal.

The transfer in Montreal was not particularly convenient or fun.  You must collect your luggage, pass through customs and then drop off your baggage.  In my case, I also had to go to an Air Transat counter after passing through customs to get a boarding pass and baggage tag.  The seat that I had pre-booked had vanished somehow, so I was given a seat at the back of the plane for the flight to Toronto - though it is only a 50 minute flight.

You also have to go through personal security again.  I note that you are allowed to bring duty free items that you may have bought in Israel if they are in one of those sealed duty free bags.  If the bag is not sealed - or the goods are not in the bag, you cannot take them through security if they include liquids or gels.  I actually did not have any duty free goods with me this time, partially since I did not know if I would be able to bring them on the flight from Montreal to Toronto.

I then had to walk across the entire airport from the arrival gate to the Air Transat departure gate for Toronto.  I had about 2.5 hours to wait for the next flight but there was free wi-fi in the Montreal airport. We were delayed by about an hour but I will assume that was not Air Transat's fault.

The flight from Montreal to Toronto is short and easy.  On arrival in Toronto, there are no customs to clear since you have already cleared them in Montreal.  But, again, we had to cross the entire airport from the arrival gate to the baggage claim area.  Then it took quite a while to actually get the bags, but I eventually got my suitcase and left.

Overall, the flight was fine.  It was a better flying experience than some other airlines but certainly not as good as the better ones.  The key is that the price was fantastic.  Air Transat was selling high season summer round trip tickets for about $1,000 Cdn all inclusive, which was less than half the cost of available Air Canada tickets and significantly less than El Al as well.  You don't get any reward points and have no chance of getting upgraded to "business class" or "premium economy."  But you can save quite a bit of money and enjoy a reasonable flying experience getting to Israel.  I certainly see no reason to avoid it.

Posted by Ranana Reveller at 1:01 PM No comments: