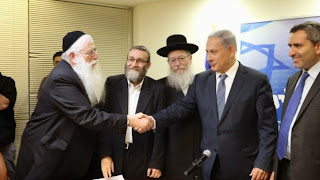 Well, the negotiations are over and we have a new government in Israel.  A razor-thin 61 seat government, led by Prime Minister Netanyahu and his Likud party.  The government includes the UTJ (United Torah Judaism) (an ultra-religious Ashkenazi party), Shas (an ultra-religious Sefardi party, led by a convicted fraudster), Bayit Hayehudi (a religious Zionist party) and Moshe Kahlon's Kulanu party.  This is one big right wing party (or maybe a small right wing party, since it can hardly be described as a broad government).

By all accounts, the concessions given up by Prime Minister Netanyahu to the various coalition partners are excessive and wide-ranging.  The coalition agreement rewards the ultra-religious parties with a veritable reversal of a full range of changes that had been instituted at Lapid's behest in the previous mandate.  I have listed them already in previous blogs.  But "highlights" include:

The list goes on and on.  For those who favour religious pluralism, for liberal democrats and those who favour shul-state separation, the list of concessions is stomach churning.  In fact, I'm having a hard time thinking of anything positive to say about the composition of this government, other than, perhaps, the notion that Netanyahu may be the leader most capable of overseeing Israel's military and managing it in the face of a war or other major military event (which could occur at any time).

The "bright light" in the new government was supposed to be Moshe Kahlon, who had been elected to focus on economic issues and help make the country more liveable for the Israeli middle class.  But his opening act in this capacity has been the delivery of a stamp of approval to a governmental arrangement that will take billions of sheqels and pour it into parochial religious programs.  I would have to think that if another election were held today, Kahlon would lose at least half of his seats as a result of this display of a complete lack of judgment.

Perhaps surprisingly, Avigdor Lieberman has kept his rightist "Yisrael Beitenu" out of this unholy coalition.  That may well herald an early dissolution of what is bound to be a very unpopular government.

One would have to think that many Kahlon and Likud supporters will be demanding answers to why their parties felt the need to deliver so many concessions to the ultra-religious to form this government.  I have yet to hear any convincing answers, certainly not from Kahlon.

The big winners are bound to be Yair Lapid, Avigdor Lieberman and the Zionist Union party, all of whom will sit in opposition.  Of the three, it is really only Lapid and Lieberman who Israelis could count on to stand up to ultra-religious demands.  The Israeli Labour party, in the past, has made equally unpalatable concessions to the ultra-orthodox and had signaled a willingness to do so once again if that would have put them in power.  Only Lapid truly stood up to these demands in the previous Knesset and Lieberman has taken a stand this time around.

The good news, if there is any at this time, is that this government is not likely to last.  Netanyahu's coalition building decisions may well mean that his days as Israel's Prime Minister are limited.  There is bound to be a backlash as the government begins to implement this Haredi agenda.

Certainly Conservative and Reform rabbis and their congregations, in Israel and abroad, are likely to begin reciting the appropriate prayer for the speedy demise of this governing coalition and its replacement with one that is more representative, more pluralistic, more transparent and more committed to the rule of law (secular law, that is).  And that is not to mention anything about the prospect of peace negotiations, which are not even likely to make it to the back burner with this governmental configuration.

Looking forward to the next election already....

Posted by Ranana Reveller at 10:52 PM