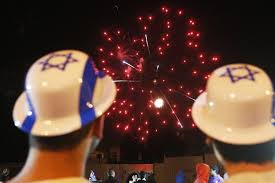 I was fortunate to be able to get back to Israel for Yom Haatzmaut - Israel Independence Day - in time to celebrate Israel's 65th anniversary.  I was away for an extended period to have the chance to celebrate Pesach in Toronto - so it is nice to be back for such a great occasion.

Yom Haatzmaut, of course, is always the day after Yom Hazikaron - Israeli Rememberance Day.  For Israelis, the cost of building and maintaining a state has been tremendous.  More than 22,000 solidiers have been killed in defending the State and some 4,000 civilians have been killed in terrorist attacks.  Of course, the line between soldier and civilian in Israel is very much blurred since most Israelis are conscripted to serve in the army for some period of time and then become available as reserves for years afterwards.  It is fitting that Israel remembers its fallen so poignantly the day before celebrating Independence Day.  It is reminder of the bittersweet essence of life.  It also undescores the level of honour, respect and dignity shown to those who have lost their lives or been injured fighting for the freedom of rest of us.  In Israel, on Yom Hazikaron, a siren sounds at 11 a.m. and everyone stops for a moment of silence.  Cars pull over on the highway and drivers get out of their cars.  Buses pull over and all of the passengers get out of the bus and stand for a moment of silence.  Everything comes to a complete halt.  Radio stations play sombre music all day.

As the sun sets, Yom Haatzmaut begins and the country shifts from commemoration to celebration.

In the evening, Erev Yom Haatzmaut, (the holiday begins the night before as with every other Jewish holiday), there are concerts and events across the country.   We attended the Ra'anana celebrations, which this year featured Rami Kleinstein and Harel Skat.

Ra'anana has close to 80,000 residents.  I wouldn't want to try to guess how many were in the park but it was quite a signficant number.  There were food vendors selling everything from pizza to hamburgers, bourekas to ice cream - and other vendors selling all kinds of must have items for kids ranging from glow in the dark watches and blow-up hammers to helium balloons and all kinds of crazy hats and headgear. 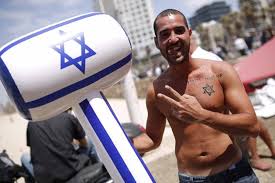 At one end of the park was the main stage.  It featured various kids' dance troupes for the first couple of hours, accompanied by recorded music.  Some of the dance groups were elementary school students and others were semi-professional dancers from some of the city's sophisticated high school dance programs.  Of course, this was hardly religious or even Israeli music.  Most of the dancing was accompanied by current pop, rap, hip-hop or other North American and British influenced music.  All of the groups were well rehearsed and some were quite entertaining.

At about 10 p.m., the City ran a 10-15 minute fireworks display.  After that, Israeli singer Harel Skat performed on the main stage.  He is quite young, having been a runner-up in the Israeli version of American Idol.  He was quite entertaining and the audience enjoyed his music.  His set was only about a half hour long but it was really good.  Most well known Israeli performers go from city to city playing at a number of venues on Yom Haatzmaut - and earning huge fees.  I don't know what Skat's schedule was like - but the Israeli papers reported that singer Eyal Golan was performing at five venues and earning about 120,000 shequels per performance (each of which were probably about a half hour long).

After Skat's peformance ended, the next performer due up was Rami Kleinstein.  He was nowhere to be found at 10:30 p.m. - probably at some other performance - so the crowd was subjected to a tortorous DJ using a stage name of "Brian's Freak Show."  He hurled obscenities at the crowd and played atrociously vulgar music, mostly uncensored rap and house music.  It is little wonder that Ra'anana's religious community runs a second stage at the other end of the park, which features, primarily, religious music.  At the main stage, which included many young children, this DJ's performance was simply obscene.  (And of course, many of you know that MY threshold is reasonably high...).  I actually found it shocking that the city of Ra'anana would celebrate its Independence Day with such a vulguar performance.  I think many agreed with me.  Even those who were waiting to see Rami Kleinstein began to lose patience as this assault continued for about 1 1/2 hours.  The audience thinned noticeably though that was also due to the fact that it was getting quite late.  Even the intended target audience did not seem totally thrilled with this filler D.J.

So by the time Rami Kleinstein showed up, and Brian's "freak show" mercifully ended, many of the people who would have enjoyed Kleinstein had left.  He performed for about a half hour and it was a great show - but it was not his ideal crowd.  Where in his live peformances, people all sing along and dance to his music, the reception here was much more subdued.

We left the park around midnight, even though the party was continuing on until 4 or 5 a.m.  My son tells me that there was a DJ called "Eazy" playing predominantly "dub step" starting at about 12:30 a.m.  It Sounds like it was even worse than "Brian's Freak Show."  I suppose each generation complains about the musical tastes of the younger generation.  But there is lots of great new music out there today, much of it popular with young crowds. So it is puzzling to me why the biggest public celebrations would feature the trashiest type of entertainment.

On Yom Haatzmaut itself, we slept in and missed morning tefilloth.  Many observant Israelis include a special Hallel prayer on Yom Haatzmaut, a prayer that is reservered for the most important holy days on the Jewish calendar.  But when we finally woke up, we performed the Israeli duty of having a barbecue on Independence Day...which was followed by a really nice, festive Birkat Hamazon to make up for the service that we had missed in the morning.

Israelis also celebrate by Independence Day by holding an International Bible Contest in Jerusalem (the finals of an event that takes place all over the world).  As well, Israeli President Shimon Peres hosted a musical event at the President's residence.

Overall, there are many opportunities to enjoy wonderful music, to celebrate with people everywhere and to contemplate Israel's future and past accomplishments.  Maybe next year, we will find a different venue for the evening event with more tasteful entertainment (not that I'm complaining about either Rami Kleinstein or Harel Skat, both of whom were great).

Chag Sameach from Israel!
Posted by Ranana Reveller at 5:13 PM