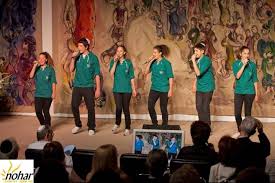 The Israeli musical group Shirat Machar is trying to put together a North American tour this summer (2013).  They are hoping to visit a number of cities including Toronto, New York, Washington, Boston and St. Louis.  They also plan to perform at Camp Ramah locations across the U.S. and Canada.

Shirat Machar is made up of a group of eleven 14-18 year old singers, selected from Israel's NOAM movement (the equivalent of USY - the Conservative youth movement in North America).

The group has released a number of CDs.  It has performed live across Israel on a number of occasions, including some very special events attended by the President of Israel, Shimon Peres.

For some members of the group, this will be their last chance for a tour as they will be entering the Israeli army for their compulsory national service.  Members of Shirat Machar are hoping that this will be the best set of concerts that the group has performed.

A group of backers have set up a funding opportunity on Kick Starter.(Click here).
The group is hoping to raise at least $10,000 U.S. to help fund the tour.  This will be a unique opportunity for the members of the group but, even more so, for those who are lucky enough to have the chance to see them perform live.  They are energetic, youthful and extremely talented.  Their performances combine contemporary Israeli pop music with more traditional Jewish-influenced music, some drawn from liturgical sources.  This group of Israeli youth shows a different face of Israel, the inspiring, hopeful and egalitarian side.

Please consider passing this link on to whomever might be interested in supporting Shirat Machar - and in seeing them perform live in North America.  If you are interested in making a contribution, you can use the link above.  This is still a conditional request - the contribution will only be accepted if the project goes ahead.

If you are looking for a taste of Shirat Machar music - try this link to Some Nights or this link to Hallelujah (Leonard Cohen Version).

Many thanks and best regards,

Posted by Ranana Reveller at 9:37 AM