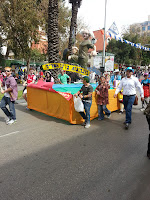 I wrote about Purim in Ra'anana last year so I'll try not to repeat too much of last year's blog.  But Purim really seems to be an "expanding" holiday in Israel.  Although it is really a one day holiday - and one of the "minor" holidays on the Jewish calendar, it seems to have every increasing stature in Israel.  Perhaps that is because it is such a fun holiday.

Kids are off school for two days (the actual day of Purim - which is today) and tomorrow as well.  But the festivities began even before that.  On Friday, students across Israel went to school dressed up in various costumes.  Many cities had their annual Purim parades that day.

In Ra'anana, the "Adloyadah" parade consists of all of the schools across Ra'anana, including elementary, middle schools and high schools, religious, secular and other building floats and marching through the main city street (Ahuza Street) led by the Mayor.  The float on the left is part of the Hasharon middle school effort. 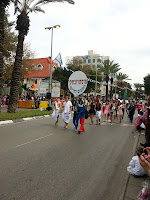 The float on the right is from the Ostrovosky high school.  Thousands of people lined the streets to watch the parade, which lasted for close to two hours.

Purim officially began on Saturday night with readings of the Megillah (the book of Esther) in synagogues and other places across the country.  We enjoyed a fully egalitarian, lay-led Conservative service and Megillah reading at Hod VeHadar in K'far Sabah.  Many of not most of the congregants came in costumes, including almost all of the children and most of the adults.  Our family accounted for two of the ten chapters, which is quite fun.  Reading the Megillah at Purim is challenging since the text is read from a scroll with no vowels, punctuation or musical notes - just like reading from the Torah.  It also seems to me that there are fewer and fewer young people who know how to chant it properly and that is quite concerning.  So we have made sure to try to do our part by teaching our kids...two of the three so far.  Fortunately, for people who are interested in learning, there are some great resources now available.  For example, the Virtual Cantor site has all of the readings available.  There are many other sites as well.

Purim continued today until sundown (other than in Jerusalem, where there is a bonus day tomorrow).  Many people delivered "Mishloach Manot" packages to friends and relatives - packages of food items, usually.  We received some really great themed Mishloach Manot this year including an all black and white themed package - and a Mexican themed package that included salsa and an avacado...

Another important part of Purim celebrations is making efforts to help the less fortunate by contributing money and food for the needy. There were visible activities in this regard throughout Ra'anana - and all over Israel.

All of these customs are rooted in Jewish religious tradition.  But in present day Israel, Purim is more than a religious festival.  It is a holiday of parties all over the country, people wearing costumes in the streets, gift giving and general merriment.  Walking along Ahuza Street, I saw people of all ages wandering about in various costumers.  Many teenagers dressed in very "minimalist" outfits.  For some reason, it seemed to be very popular for teenage boys to be wearing baby outfits - simply an adult diaper - and nothing else.  Some of them also carried a rattle...

Many teenage girls were wearing equally scanty outfits.  For example, we walked by a whole group of female "police officers," all wearing extremely short mini-skirts, hardly the current uniform of the Israeli police.

The grade 12 high school class at Ostrovsky High School all wore the same outfit.  The students chipped in some money and bought a set of matching white painters overalls for everyone in the class.  At 7:30 a.m., the met at a nearby park and had a "paint war" dumping paints of all different colours all over each other.  Then they all went to school dressed up as painters.  It was quite a sight to see the Ostrovsky students wandering around Ra'anana in their costumes.  Some of the students, mainly the boys as far as I could tell, wore nothing other than the overalls...

Fortunately Israel enjoyed some really nice weather.  If the weather had been cooler, many people would have been quite chilly if they had worn the same "costumes."

Overall, Purim is one of those holidays that is particularly exciting in Israel.  There is a celebratory atmosphere throughout the country and that  makes Purim very festive.

Posted by Ranana Reveller at 6:42 PM