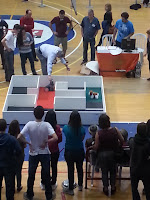 This is a scene from the national high school robotics championship that was held earlier today at Metrowest High School in Ra'anana, Israel.

The competition winners advance to participate in the annual Trinity College Firefighting Home Robot Contest in Hartford, Connecticut.  This international robotics contest (the "TCFFHRC") is open to entrants from around the world.  This will be the 20th year of the contest.  The finals will be held in Hartford on April 6 and 7, 2013.  Past winners have included teams from China, Israel, Canada and the United States.

Contestants are required to build self propelled robots that move through a maze to find and extinguish a burning candle.  Along the way, the robots may face an obstacle (a stuffed toy dog) that is placed in the maze at one of several random locations based on the roll of a die.  The candle is placed in one of four locations, also randomly.  The robot is built and programmed ahead of time.  Contestants are only allowed to place their robots at the starting position and turn them on.  The judge preses the "start button."  Robots are awarded points for checking each of the rooms, finding the candle and extinguishing it.  They lose points for touching or bumping into the walls or bumping into the dog.  Of course, the robots are also timed and speed is a very important part of the competition and the scoring.

Students work very hard for months building and programming these robots.  On the day of the competition, it all comes down to three chances.  The atmosphere is quite tense.  This year, there were more than 60 teams competing.  This is a very difficult competition and historically, only about 30% of the teams succeed in having their robot complete the course and extinguish the candle at least once. 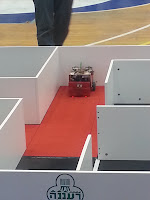 This a view of one of the mazes, with a robot at starting position.  We watched as quite a number of robots set off quite hopefully and then...faced disaster.  Some moved only a few metres and then suddenly stopped.  Others crashed into walls, became stuck trying to turn corners or faced other unexpected difficulties.  One robot started spinning around repeatedly.  Another arrived at the candle but could not blow it out.  By the end of the first round, approximately ten robots had succeeded in putting out the candles and completing the mazes.

After the second round, four or five additional teams succeeded in putting out their candles and completing the mazes.  All of the teams that failed in their first two attempts were eliminated from the competition, leaving of about 15 teams to participate in the final round.

By the end of the competition, three teams had succeeded in completing the course successfully and extinguishing the candle on all three tries.  All three of these teams, which finished in 1st, 2nd and 3rd place were from Misgav High School in Israel, a school which took the 1st, 3rd and 5th places at the 2012 world competition.

Three teams from Ostrovsky High School in Ra'anana finished 4th, 5th, and 7th in this year's Israeli competition.  This photo features the 5th place team.  You might recognize the student in the middle...

Although Israel has generally sent the first three teams to the international competition, at which they have performed quite well, Israel has sometimes sent additional teams to participate in these exciting events.  It remains to be seen whether Ra'anana will be represented at this year's   TCFFHRC in Hartford.  That will likely be decided with input from Ra'anana's Mayor, Ostrovsky High School, and perhaps Ministry of Education officials.

Needless to say, we are thrilled and excited for all of the participants, the winning teams and the students of Ostrovsky in Ra'anana who performed so well....especially the students in the photo who came in 5th place...one of whom happens to be a family member...

Posted by Ranana Reveller at 1:34 PM