On Wednesday, we received the official results from the January 22, 2013 Israeli election.  These results have now been slightly adjusted and we have received the "final" official result as of approximately 5 p.m. on Thursday January 24, 2013.  Apparently, there were still ballots to be counted from military personnel, prisons, hospitals and foreign-stationed diplomats.  After counting all of these ballots  (approximately 220,000), a few changes have now been announced.  Naftali Bennett's party, HaBayit Hayehudi has increased by one seat to 12 and the United Arab List has dropped to 4 from 5. Yair Lapid and the Yesh Atid party have remained stable at 19 seats.  The Yesh Atid party still seems to be in the driver's seat as the front runner to help build a government with Prime Minister Netanyahu.

Lapid has a wide ranging and interesting background.  The son of Tommy Lapid, late leader of the Shinui ("change") party, a secular party which reached 15 Knesset seats in 2003, Yair Lapid has politics in his family background.  In addition to his political career, he has also been involved in many other activities.  He has written well known Israeli songs, tried amateur kick-boxing (which he still practices 1-2 hours a day - even while on the campaign trail), acted in Israeli shows and worked as a TV news commentator.  He has also brought a refreshing approach to bridging the secular-religious divide in Israel.  For example, or a number of years, he ran a Shavuoth night "tikkun" - an all night learning program that  focused on a wide range of topics of Jewish interest rather than pure Torah study. 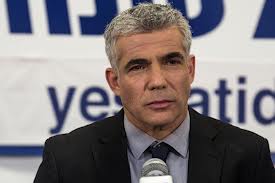 With his new political party, Lapid has emphasized a new approach to politics in Israel and an effort to represent the silent majority - the non-ultra-orthdox, army-serving, middle class, zionist Israelis.  Among other platforms, Lapid has called for efforts to increase the availability of lower cost housing, and to ensure that all Israelis, at the age of 18, including ultra-orthodox and Arabs, serve in the army or perform some type of national service.  He has vowed to insist on these demands as part of his fundamental terms for joining any coaltion government.  He has also vowed to insist that the peace process with the Palestinians be re-ignited.

As of yesterday, the left-centre "bloc" in Israel, including the Arab parties and Yesh Atid made up exactly 1/2 of the new Knesset - 60 seats - with the right and right-centre bloc, including the ultra-orthodox, making up the other 60.  As a result of this afternoon's announcement, adjusting the results, the right bloc now has 61 seats and could, theoretically, form a very right wing/ultra-orthodox coaltion that could hold the majority by 2 seats.  Most commentators feel that Prime Minister Netanyahu does not want to go down this road for a number of reasons.  The government would be very fragile.  The Prime Minister would be under constant threat of different coalition members leaving the government if they were not provided with new concessions.  Many of the concessions Prime Minister Netanyahu would have to make, particularly to the ultra-orthodox would be unpalatable to much of the Israeli public including many who voted for Netanyahu's party, Likud.  So there is a real sense that Prime Minister Netanyahu  very much intends to enter into a coalition agreement with Yesh Atid.

But this is where the fun starts.  Lapid has indicated that he has three key demands in order to enter the government:

1.   Most imporantly - an equal sharing of the "burden" of military/ national service.  Lapid proposes that all Israelis, with the exception of a very small number of ultra-orthodox, super-bright scholars, will be required to serve in the army or perform national service.  Prime Minister Netanyahu has made statements indicating that he is prepared to support this idea, although it is unclear whether he will be willing to follow it through.  The other left and left-centre parties - such as Labor, Meretz, Hatenuah and Kadima would support this type of legislated change.  It may also be the case that Naftali Bennett's party, Habayit Heyehudi, would also support a modified version of this type of law. Bennett might also support changes to Israeli laws that deal with zoning restrictions on land and other laws that would, generally, help bring about a lower cost of living in Israel.  So there is a good chance that Lapid could wind up in a government with Netanyahu and Bennett, which would make significant domestic changes that many Israelis would appreciate.  It is hard to imagine that these terms (at least universal conscription) are terms to which the Shas party (with its 11 Knesset seats) would agree.  So this scenario might see a government without Shas, the ultra-religious party that has historically extracted massive concessions in exchange for joining coalition governments.

2.  Lapid has also indicated that another key demand is a resumption of Israeli-Palestinian dialogue with a view to negotiating an agreement.  Of course, just starting talks does not mean that they would go anywhere.  Lapid has firmly stated that he would not be prepared to divide Jerusalem and that view probably represents a significant majority view in Israel.  The Palestinian Authority described the visit by Prime Minister Netanyahu to the Kotel on the eve of the Israeli elections as a "provocation."  But this is Judaism's holiest site.  There are no conditions, in the foreseeable future, under which Israel would cede control of the Old City of Jerusalem.

Lapid has also indicated that the Palestinian refugee problem should be solved by the Palestinians in their new state when an agreement is reached.  This makes eminent sense and is a view that also enjoys wide ranging Israeli public support.

These two issues, Jerusalem and the Palestinian refugee problem, have supposedly caused or contributed to collapses in talks in the past.  But realistically, no Israeli government, even a left wing government would be prepared or even able to make major concessions on these points.

On the other hand, Lapid has indicated a willingness to support a two-state solution and to come to terms with Palestinians on mutually agreeable borders, which could even include the removal of some Jewish settlements.  It is quite clear Bennett's party is not prepared to make any such concessions and would refuse to join a government that planned to do so.  So while Bennett may be prepared to support some of Lapid's domestic agenda, he will not support Lapid's foreign policy.

3.  Lapid's third demand is for a reform to education to ensure that everyone studies secular subjects in school. This is strongly opposed by Shas, but not necessarily by Bennett.  Netanyahu has indicated that he would be prepared to support this type of change.

Overall, Shas is on the opposite of Bennett on a number of these issues.  While they might support Bennett's foreign policy views, they would oppose most of his domestic agenda and would insist on continued support for much of the ultra-religious political agend, which Lapid has staunchly opposed, and which make up two of his three main platform ideas.

So it looks like the Netanyahu-Lapid coalition, if it happens, will either include Shas - and maintain much of the status quo on the domestic front while moving ahead on the diplomatic front - or it will include Bennett and it will make signficant changes domestically but drag its feet on foreign policy matters including negotiations ,with the Palestinians, if they take place at all.

For now, the likeilhood seems to be the addition of Habayit Hayehudi.  This may well result in some very real and tangible gains for the left-centre, domestically, but it is unlikely to result in any progress with respect to peace talks and peace efforts.  Of course, if Lapid is able to demonstrate tangible accomplishments for at least part of his platform, that may well improve his political capital and open the door to changes in other areas in the future.

In the meantime, it is worth remembering that the Shas party negotiators are very experienced in these matters.  They may yet offer some concessions on the issue of universal conscription and may show a willingness to support a broad peace initiative.  It is quite conceivable, though, admittedly less likely, that Shas could be part of a Lapid-Netanyahu government that could make progress in a few different areas.

Some commentators are estimating that it may take up to six weeks for this coalition negotiation process to unfold.  This is where we will see the real results of this election.  This process is sure to be even more interesting than the election itself.