Latest Arrests of Women at the Kotel

In the most recent instance, Jerusalem police once again arrested Anat Hoffman, leader of the group Women of the Wall.  She was arrested for "disturbing the peace."  Her crime was reciting the Shema, out loud, while wearing a Tallit (a prayer shawl) at the Kotel (the Western Wall).  In other words, she committed the offence of praying out loud, while being a woman. 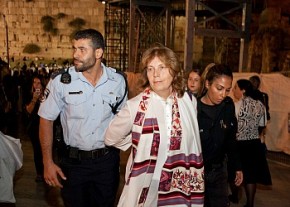 Tuesday night was the start of the new month of Cheshvan (or perhaps, more aptly "Mar Cheshvan" - the bitter month of Cheshvan - since it does not feature any Jewish holy days).  But it also coincided with the 100th anniversary of Hadassah, the Women's Zionist Organization of America, which was celebrating the occasion with a convention in Israel.

Ms Hoffman was arrested for the sixth time over the course of her twenty years of advocating for women's equality at Judaism's holiest prayer site.  On this occasion, she was treated in a much more brutal fashion than in the past, she claims.  She was handcuffed, strip searched and detained overnight.  She was eventually released by a judge on condition that she stay away from the Kotel for 30 days.

I have previously written blogs about this topic - (See Women Arrested for Wearing Tallith At Western Wall) but the issue continues to percolate and  to attract a great deal of publicity.  How is it that a free country like Israel can prohibit women from praying out loud at the Kotel?

Essentially, the State of Israel has ceded authority over the Kotel to the Orthodox and Ultra-Orthodox religious establishment.  In doing so, it has excluded all non-Orthodox forms of Jewish workshop, which comprise quite a significant proportion of world Jewry (other than at the Southern Wall -the Davidson Centre).  The creep of this gender-exclusive Orthodoxy has found its way into other public spheres in Israel, some of which I have also written about previously.  (See:  Jerusalem Not Tehran and Gender Equality In Israel).  This is all under the guise of protecting and promoting religious rights in Israel - indeed minority religious rights - since the Orthodox and Ultra-Orthodox are still in the minority.  But unlike other western countries grappling with these tensions, Israel's pendulum has swung over to the side of religion at the expense of other liberal democratic rights.

Though the Orthodox and Ultra-Orthodox characterize the issue as one of respect for their Orthodox practises, at what they see as an Orthodox worship site, the flip side is significant disrespect for everyone else and particularly for women.  The Kotel  is a holy site that belongs to all of Israel and should not be viewed as an exclusively Orthodox Synagogue, even though that is the status that it currently has.

The issue is not about a group of women trying to disrupt Orthodox men by praying at the Kotel  provocatively, though that is how it has been characterized by supporters of the status quo.  Rather, it is about a the rights of women to pray and sing out loud, in public.  It is about the rights of women to be heard in Israel and to be treated as equals, religiously and otherwise.  It has implications far beyond what occurs at the Kotel itself, as we have seen in Israel over the past few years.

It remains to be seen whether anything will change as a result of Israel's upcoming elections, though that appears unlikely at this point.  The Orthodox parties are likely to continue on as an integral part of any new government and the status quo at the Kotel is likely to remain in place.  This battle for gender equality and religious freedom is likely to continue on for some time - just as other battles between religion and gender equality are  likely to be played out in liberal democracies around the world.

Posted by Ranana Reveller at 7:47 PM