Only Kosher vegetables may be served in Kosher restaurants, according to an increasingly large number of rabbinic authorities around the world.  Although for our parents and grandparents, vegetables and fruit were all considered kosher, that has changed over the past number of years as Kashrut authorities have concerned themselves with whether there might be microscopic bugs hiding out in some of the vegetables.  This has affected Kosher restaurants and caterers around the world, many of which have been prohibited from using romaine lettuce, cauliflower, broccoli, asparagus tips and many other green vegetables.

I noticed this two years ago in Israel when eating at the Kohinoor restaurant at the Crowne Plaza Hotel in Jerusalem.  The restaurant did not have aloo ghobi on the menu (a common Indian dish of potato and cauliflower) since cauliflower had been banned by the rabbinic authorities.  Other vegetables dishes were also missing.  I have also noticed this repeatedly when ordering Kosher meals on airplanes.  I look at my tray and wonder why I have not been served any healthy vegetables. 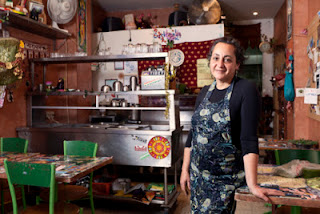 Now, according to YNet news in Israel on October 15, 2012, the Kashrut authorities have caused the Jerusalem restaurant Ichikidana to give up its Kosher certification.  Ichikidana is a small,vegetarian Indian restaurant in Machane Yehuda, the large Jerusalem market.  The restaurant is known for only using fresh local ingredients.  It does not use canned, processed or frozen food and does not serve sugary drinks or alcohol.  The restaurant does not use a microwave and serves its food on recycled plates only.  It is considered one of the few restaurants in Israel that serve authentic Indian food.

Apparently, the Jerusalem Kashrut authorities have now begun to insist that Kosher certified restaurants only buy their vegetables from specific approved stores.  This was simply too much for Ichikidana which elected to opt out of Kosher certification.

It is quite disappointing to see this spread of extremism which is evident not just in Israel but around the world.  In many of these situations, the only solution will be for competing Kosher authorities to emerge and offer more rational alternatives.  But for now, as many of these monopolistic Kashruth councils are dominated by increasingly extreme rabbis, they try to outdo each other by coming with more and more stringent rules.  The results are terrible for Kosher consumers, particularly those who would like to eat healthy green vegetables.

I plan to visit Ichikidana as soon as I have the opportunity over the coming weeks.  I hope to enjoy some fresh vegetables when I'm there, wherever they happen to have been bought.


Posted by Ranana Reveller at 8:21 AM