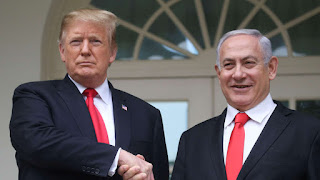 It is Remembrance Day, 2020, eight days after the U.S. election.  Amidst the ongoing turmoil in the U.S. and the almost equally tenuous situation in Israel, a blog post is overdue.  On Remembrance Day, we reflect on the high price that we have paid to fight for freedom and democracy - the millions of civilians and soldiers who lost their lives to ensure a better  future for everyone else.  And of course, we often think of what might have been if the Allies had not emerged victorious by the end of the Second World War.

I haven't provided this introduction to be overly dramatic.  But there are very real concerns facing democracy in the United States and in Israel and I think some context and discussion is relevant.

As  of the writing of this blog, the U.S. is really at a crossroads.  We await the "official" results even as most major U.S. networks, including pro-Trump networks like Fox News, have called the election in favour of Joe Biden.

On the one hand, I accept that either candidate is entitled to ensure that full and final results are tabulated and certified.  Arizona, Georgia and North Carolina have still not been called.  The margins are very slim and there are still many votes left to be counted.  North Carolina seems highly likely to go to Trump.  It is within the realm of possibility that Arizona or  Georgia or  both could be flipped as a result of lawful counting.  But even if Trump managed to take both Arizona and Georgia, which seems unlikely but possible, that would still leave him behind 279-259.

What next?  Again, on the legal side, it is possible that a legitimate recount of Wisconsin could flip the state.  The margin is very small.  However, this seems unlikely.  Trump won Wisconsin by a very small margin in 2016 but the result was upheld.  There is no reason to believe that the Wisconsin ballot counters are off by so many votes.  They seem to know how to oversee closely contested elections.

Winning and flipping Arizona, Georgia and Wisconsin would be highly improbable  but if the votes bring those results legitimately, it would not be undemocratic or improper.  On the contrary, it would be entirely democratic and appropriate if that  was what the actual votes showed.

But assuming that Trump loses at least one of those three states, there is no real path to re-election for Trump other than the use of the judicial system to mount a large-scale attack on the U.S. voting process - in states that Trump has lost.   This is where things become frightening.

The margin in Pennsylvania is more than 40,000 votes and is likely to wind up being more than 70,000-80,000 votes.  As of the writing of this blog, no evidence has been presented that would come close to invalidating that many legal votes.  But Trump seems to be convinced that if he can bring any argument at all to the Supreme Court of the United States (even if he is defeated at lower court levels), his battalion of three newly appointed justices will combine with two or three of the existing right-wing judges on the Supreme Court and uphold any argument that he puts forward, even one which disenfranchises more than 40,000 voters.

I am hopeful that we will not get close to  this scenario, but it is a terrifying one.  This type of ruling, if it were to occur, could only be characterized as a court-sanctioned coup.  We have already seen the U.S. Supreme Court tilt an election to the Republicans in a ridiculously partisan 5-4 decision in Bush v. Gore.  We can only take solace in the notion that Florida in 2000 was unclear in any event and a decision  in Gore's favour at that  time may not have resulted in a Democratic victory.  If the Supreme Court were to side with Trump in the present circumstances, it would be a very different situation, by orders of magnitude.

You might be wondering how this all relates to my blog.  I think there are a few different responses.

First of all, Israel and its leadership are watching the U.S. results as closely as any other country in the world, if not more so.  Prime Minister Netanyahu has invested a great deal in his personal relationship with Trump.  In the last Israeli election, Netanyahu posted billboards all over the country with giant pictures of him and Trump posing together with the message that only Netanyahu could continue the special relationship with President Trump and the United States.  Netanyahu has placed most, if not all, of his eggs in the Republican basket.  He has cooperated with Trump to try and shift support for Israel to a partisan idea in the U.S. in the hopes of moving voters to the Republican party.

Although President Obama took some actions that were viewed as hostile to Israel's interests, the Obama administration was very supportive of Israel in many other ways.  The U.S fully supported Israel during the  Gaza war, improved military and technological cooperation and handed off a very strong U.S. - Israel relationship to Trump.  There are some real questions about the Iran nuclear deal that was signed under Obama.  Additionally, it is unfortunate the Obama snubbed Israel at the beginning of his administration and refused to visit while he was "in the neighbourhood."  His support for an anti-Israel U.N. resolution on the way out the door at the end of his second term was odious.  But it is very misleading to conclude that the Democratic party has gone along with Trump's efforts to make Israel a partisan issue.  There are many leading Democrats who are very supportive of Israel and if Biden wins the election and takes office, it will be very important for Netanyahu and Israel to work with Biden constructively.

At the same time, Trump deserves credit for moving the U.S. embassy to Jerusalem, for cutting off funding to Palestinians until they agree to end the "pay for slay" program and for advancing peace agreements between Israel and other countries in the region.   A Biden administration may reverse some of these policies and that may not bring the region any closer to peace.  Hopefully Biden will be more supportive of Israel than Obama was in some areas.  Indications are that this is likely.

All of this has put Netanyahu in a quandary.  He has invested so much energy and political capital in mobilizing support for the Republicans that he found himself in an awkward situation staring at a likely Biden victory.  Even as news networks across the U.S. were calling the election in Biden's favour, Netanyahu resisted recognizing his  buddy's  election loss.  While leaders of several other countries congratulated Biden, Netanyahu held out for more than 12 hours after which he finally felt forced to offer his best wishes.  Unlike the leaders of Russia, China, Turkey, Brazil and a few others, Netanyahu recognized that he would have to say something.  Notably, he has avoided calling Biden "President-elect" but he has sent at least one lukewarm message.

This is not  Netanyahu's first awkward moment resulting from his pro-Republican partisanship. Weeks before the election, in a conference call with world leaders, Trump asked Netanyahu to confirm that "sleepy Joe" wouldn't have been able to bring about these peace deals with UAE, Bahrain and  Sudan.  After a long pause, Netanyahu demurred and  mumbled that Israel is happy to get the support of any  U.S. leaders who can provide assistance.  Trump's face told the whole story.  He  was  quite displeased with Netanyahu's response.

Following the election,  Netanyahu was again faced with the question of how to keep Trump happy while not damaging Israel's political interests with a new U.S.  administration.

Netanyahu himself is in a very questionable situation.  He remained in power after the March 2020 elections by cobbling together a coalition with the biggest opposition party - Blue and White - which then promptly fractured into two parts, only one of which joined Netanyahu's coalition.  Key terms of that coalition deal included a two year budget (until the end of 2021) and a rotation agreement under which coalition partner Benny Gantz would become the Prime Minister in September 2021.

Eight months have passed and no budget has been presented.  Netanyahu has taken the position that times have changed and the government should now only pass a budget that  covers 2020.  That would leave him something to argue about and a reason to break apart the coalition and  call a new election in early 2021.  Needless to say, the Blue and White party have demanded that Netanyahu honour the coalition deal and agree to a two-year budget.  The matter is headed for a showdown by the end  of November at which time the government will fall if a budget agreement is not reached.

Netanyahu is still holding out hope that he can win an election and put together a  right wing coalition.  His criminal trial is scheduled to resume in January 2021.  He is facing three different sets of charges for bribery, breach of trust and corruption.  Over the past three elections, he has been hoping that he can put together a coalition that would agree to legislation that would retroactively eliminate his criminal problems.  This would be a shockingly anti-democratic move but he  seems to have quite a large number  of Israel Knesset members who would be prepared to support this type of bill, though not he has not yet been able to get more than half the Knesset to sign on.

Unlike the U.S. President, the Prime Minister of Israel does  not have the power to pardon people (or himself).  He can seek a pardon from the President of Israel, who holds an otherwise largely ceremonial figurehead role, much like the Queen in England or the Governor General in Canada.  So Netanyahu will require a Knesset majority of some sort if he hopes to get his legal troubles to vanish.  On the other hand, I am quite convinced that if Trump eventually relinquishes his office (or is forced to do so), he will pardon himself and many many others, including family members and friends just before leaving office.  It remains to be  seen whether the U.S. Supreme Court will uphold this use of a self-pardon.  Certainly there appear  to be 3 or 4 judges would almost certainly side with Trump.  I suppose that Gorsuch, Coney Barrett and Roberts will be the real decision makers,  though I am beginning to feel more confident that Roberts would not go along.

In short, looking at all of this, we are facing some very real tests of democracy in both the U.S. and Israel.  The fight in the U.S. may extend into January as various court challenges, recounts and other steps are all addressed.  I offer my hope that honesty, fairness and integrity will prevail in both the recounts and any judicial decisions.  In Israel, things may not be decided any time soon.  There may be an election in the coming months but it may be followed by still more elections if Netanyahu is unable to win and rid himself of his criminal charges.

In both cases, democracy  and freedom will only prevail if the eventual election results reflect the actual votes of the people and if the voices of the people are heard, upheld and implemented.  In assessing recent actions taken by Trump, including the spread of demonstrably false claims, and the efforts to disenfranchise hundreds of thousands of  voters, we should remember the history lessons that we think of, especially today.  And remember how easily a vibrant democracy can quickly slide into totalitarianism.

Posted by Ranana Reveller at 8:24 AM