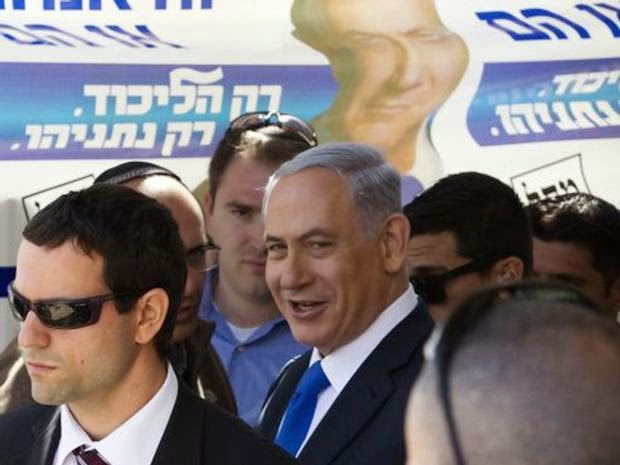 "Reports of my demise have been greatly exaggerated."

Prime Minister Benjamin Netanyahu led his Likud party to a massive and surprising victory on Tuesday.  While pre-election polls had put the Likud in second place with a forecast of 20-21 seats, the party emerged with 30 seats, the largest number of any party and some 25% of Knesset seats.  Netanyahu will still need to add 31 more Knesset members to get to the magic number of 61to form a government.  However, that looks like it will be relatively easy for him this time around as compared to what he faced just after the 2013 elections.  He will have the support of Habayit Hayehudi ("Jewish Home" - Naftali Bennett's party) which was reduced to 8 seats from 13.  He will also have the support of Yisrael Beitenu ("Israel Our Home" - Avigdor Lieberman's party) which won 6 seats.  That brings him to 44.  He will then turn to the ultra-religious and add in Shas (8) and Degel HaTorah (6). With 58 Knesset members and needing only 3 more, he will most likely count on the Kulanu party, led by Moshe Kahlon with its 10 seats to put Likud at 68.  There is a possibility that Yesh Atid (11 seats) will also consider joining but that seems less likely, especially if the government includes Shas and Degel HaTorah.  Even without one of these two parties, the government may be too far to the right for the tastes of the 11 Yesh Atid (Lapid's party) members.

The Zionist coalition finished with 24 seats, 6 behind Likud.  The United Arab List finished with 14 to become the 3rd largest party in the Knesset.  Meretz hung on with 4 and Eli Yishai's splinter party Yachad, which had left Shas did not make it into the Knesset.

This is all not very good news for Israelis on the left or even those in the centre.  Effectively, Netanyahu will have accomplished his goal.  He will have exchanged the "left" constituents of his previous government - Tsipi Livni and Yair Lapid - for two ultra-religious parties (Shas and Degel HaTorah) and Moshe Kahlon's party.  Kahlon was a former Likud MK himself.  Not that Livni or Lapid were really "leftists" but in the Netanyahu government, they certainly were.


As the election campaign was drawing to a close, Netanyahu sought to shore up his right wing support by renouncing his past statements of support for a Palestinian state. Based on the anticipated constituent members of the government that will most likely be formed, it is hard to see how any negotiations will take place with the Palestinians anytime soon.

In looking at these results, we can size up the Israeli electorate as follows.  57 out of the 120 Knesset seats are right wing or religious parties.  21 more are centrists or right-centrists.  14 seats are in the Arab bloc.  That leaves 28 seats for the left.  The results clearly show that the Israeli electorate leans, at this point in time, heavily to the right.

There had been a sense of optimism in central Israel that the left and the centre would fare better.  Even the exit polls that were released at 10 p.m. in Israel suggested that the Likud would be tied with the Zionist Union at 28 for the lead.  But when the votes were actually counted and the results announced, Israelis had shown a clear preference to continue on with Prime Minister Netanyahu ("Bibi") as the Prime Minister.

Prime Minister Netanyahu was the big winner of the evening with 30 seats, rallying from a polling deficit, a barrage of attacks from the press and a big push by the left to try and remove him from office.  He scored a convincing victory.  If he serves out a full term, he will become Israel's longest serving Prime Minister.

Looking down the list, it is also reasonable to put Moshe Kahlon in the winners group, with his 11 seats.  His party will most likely join the government and will have significant power.  Other winners include Shas, which is also likely to join the government.  The Joint Arab List won a convincing 14 seats.  However, they will sit in opposition and have little impact on the government. Avigdor Lieberman held on to 6 seats and will likely hold a cabinet post. So, on balance, he can also be put in the winners category.

Almost all of the other parties can be put into the "losers" camp.  For Yesh Atid under Lapid, this election meant a reduction in seats from 19 to 11.  Lapid's party is likely to be sitting in the opposition this time around after holding a number of important cabinet posts in the most recent government.  It is hard to paint this as any kind of victory for Lapid.

The Zionist Camp won 24 seats.  While that is a respectable number, the party's goal was to form the government.  That will not happen.  This can only be described as a defeat for that party as well, despite the sugar coating by some of its leaders.

Meretz held on to its status with 4 seats but its leader promptly resigned, early this morning, taking the blame for the party's decline in numbers.  Eli Yishai's splinter party Yachad failed to make the cut off and will not sit in the Knesset.  The election can even be viewed as a defeat for Bennett's (Habayit Hayehudi) party which only won 8 seats.  However, Bennett will play a key role in the new government so it is more of a mixed result for his party.

The 2013 election brought a sense of optimism in some Israeli circles as a government was formed that included Tsipi Livni and Yair Lapid and left out the ultra religious parties. That government made some moves on economic and social issues but approached Palestinian issues through the Naftali Bennett lens.  Now, it is anticipated that the party's "left" will be Moshe Kahlon's party and the party will continue to approach Palestinian issues through a Naftali Bennett lens.  As well, the government will approach many other issues through an Ultra-Orthodox lens.

In the losers category, I suppose I will also have to include my personal election predictions.  I accurately predicted that Yishai would be out and that Meretz would make it in (barely).  My predictions for Yisrael Beitenu, the Arab list, Shas and Degel HaTorah, were all within one.  I was wildly off with the Likud predicting 21- which is 9 less than the 30 that they won.  I overestimated the Zionist Camp (27-24), Yesh Atid (16-11) and Bayit Yehudi (13-8).  Conversely, I underestimated Kahlon (7-10).  On the whole, it looks like a chunk of centrist votes went to Kahlon instead of Lapid - and a chunk of right wing votes went to Likud instead of Bayit Yehudi.

What can be concluded? The left and the centre are far from close to forming a government in Israel at the present time.  The electorate prefers a right wing government and has voted heavily in favour of putting one in place.

Israel is surrounded by hostile, unstable regimes.  The threat of war with Hezbollah on Israel's northern border looms large as does the possibility that the Syrian civil war will spill into a conflict that engages Israel.  Egypt is a powder keg and Israel is constantly on high alert at its southern border.  All three of these realities would be unlikely to change irrespective of the type of leadership that Israel had in place.

With respect to the Palestinians, many Israelis fear that the danger of a Hamas takeover in the West Bank (Judea and Samaria) would make a two state solution suicidal for Israel at the present time.  Together with all of this, pre-election opinion polls showed that Netanyahu was perceived as the best leader for Israel.  Zionist Camp leader Herzog did not project strength or confidence.  On the other hand, Netanyahu was perceived as a strong, forceful, qualified political and military leader.  For many Israelis, that is the type of leader Israel needs to face the unique range of existential threats that it must constantly address.

One can only up that the day will come when Israelis feel less threatened existentially and confident enough to try a different approach.  These elections clearly demonstrate that this is not yet the case.

I guess for now we will have to go with this line from our daily prayers:


Posted by Ranana Reveller at 1:57 PM