Israeli news outlets YNet News and Haaretz as well as Israeli radio and television stations have devoted extensive coverage to a rally by Ultra-Orthodox Jews (“Haredim”) on Saturday night. At the rally, the protesters were wearing yellow stars reminiscent of the yellow stars that Jews were forced to wear in Nazi German and occupied Europe. There were also protesters wearing striped pajamas as if they were imprisoned in concentration camps. Some of these Haredim dressed their children in Nazi-era clothing and had them raise their hands to copy the famous Warsaw Ghetto photo. 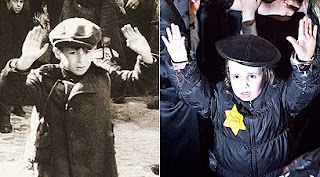 What exactly has Israel done to cause these Haredim to make boisterous claims that they are being persecuted “in ways worse than the persecution under Nazi Germany?” Aside from the fact that the State of Israel provides funding to Yeshivoth (schools of Jewish learning), exemptions from military service, extensive welfare and medical coverage and many other benefits, the Haredim are particularly upset at the recent wave of protests throughout Israel against “hadarat nashim” – the “exclusion of women.” The right of the Haredim to treat women as second class citizens is sacrosanct and mandated by their religious beliefs, they argue. Any challenge to these views is state-imposed fanaticism that must be labeled “fascist.”

As I have described in other blogs, there has been growing media and public attention over the issue of gender equality in religious and ultra-religious communities. People have been begun to take issue with the existence of segregated buses in certain communities, sometimes even state funded, where women are forced to sit at the back of the bus; with the posting of signs requiring women to walk on a different side of the street than men; and with the pressure placed on the Israeli army by Haredi soldiers insisting that women not be permitted to sing at official events. In rallies across Israel, organizations such as “Israeli Chofshit” – “Free Israel” have hosted events at which men and women, politicians, citizens and Israelis from different backgrounds, religious and non-religious, have spoken out against gender discrimination. Looked at through the lens of gender equality, it is actually easy to single out those with the real “fascist” values.

Now, in what can only be described as a repulsive display, the Haredim have held a counter-demonstration protesting against these rallies as what they call the “exclusion of Haredim.” They argue that Israeli secular society is “waging war” on their way of life and taking away their right to practice their religious beliefs as they see fit. To make these arguments, they resort to the extreme comparison between themselves and Holocaust era Jews who were being rounded up, imprisoned and executed.

The use of Holocaust imagery for this purpose has sickened average Israelis, many of whom have family members or other friends or relatives who were Holocaust survivors. Many also feel quite outraged that their tax money is being used to provide state support for this medieval way of life which often runs counter to values of equality and freedom that Israel promotes as a progressive state. Ironically enough, it is these values of tolerance and equality, promoted primarily by secular society, that have allowed the Haredim to flourish in many parts of Israel.
Posted by Ranana Reveller at 11:45 AM No comments: