The Aroma Espresso Bar chain is Israel's largest chain of cafes.  With more than 125 locations in Israel, it sometimes feels like there is an Aroma everywhere.  These cafes are in shopping malls, hospitals, street corners and gas stations.  The coffee is quite good.  In my view, it probably tastes better than the offerings of most Canadian chains, other than Second Cup.  Of course, that is also probably true of most other Israeli coffee chains, some of which I mentioned in my blog post about coffee culture in Israel in January 2012.

The difference between Aroma and many North American coffee chains is the emphasis on fresh food to go with the coffee.  Aroma features a variety of salads and sandwiches which are made on freshly baked bread.  In Israel, some of the Aroma locations are Kosher but most are not.  The non-Kosher locations add chicken, roast beef and other meats to the menu.  The Kosher locations are generally all dairy.

The main location in Ra'anana, on Ahuza Street, was a Kosher location.  However, it burnt down in a fire last year.  It has still not reopened.  The place is still boarded up, creating quite the eyesore on a very main Ra'anana thoroughfare.  So Ra'anana residents looking for an Aroma coffee need to drive over to the nearby mall or enjoy coffee from one of the many other fine cafes in the city.

The fascinating thing about Aroma has been its worldwide expansion.  In 2007, Aroma landed in Toronto.  It now has 18 locations in Toronto and seems to be faring quite well.  The menu is somewhat different from Israel.  None of the Toronto locations are Kosher.  But the emphasis on fresh salads and sandwiches is what gives Aroma a huge edge over its Canadian counterparts and U.S. chains.  None of the Canadian competitors in the espresso bar field (chain locations) offer fresh food and salads.  The food in Starbucks is generally pre-made and unappetizing.  Second Cup offers a very minimal selection.  Timothys is even worse.  This gap has probably contributed greatly to Aroma's Canadian success.

In Canada, Tim Hortons, a coffee chain, has locations across the country.  While Tim Hortons is known for a wide variety of food offerings at very reasonable prices, its coffee is not of the high end variety.  Tim Hortons appeals to an entirely different clientele than the various espresso cafes.  Interestingly, a chain like Tim Hortons might stand a chance in Israel.  There are few places, if any, in Israel where you can get a bagel and a coffee for $3 (10 Shekels) like you can in Tim Hortons.  Then again, although Israelis might like the cheap bagels, they would probably not enjoy drinking Tim Hortons coffee..

Starbucks made an effort to open in Israel.  But it was very pricey and Israelis did not enjoy the coffee.  As well, it did not serve quality food.  Its stay in Israel was short lived.

Aroma has been opening other locations around the world.  There are apparently four now in New York and a few in different countries in Europe.  Looking at the current situation in North America, Aroma should be poised to continue its growth and success.   The combination of high end coffee and fresh food still occupies a unique market segment.  In Canada, Second Cup, Timothys and Starbucks would all need to reinvent themselves to compete for that type of business.  Or they could simply try to continue counting on their own marketplace niche.

The success of Aroma may well provide other Israeli cafes with the impetus to try their luck in North America.   Arcaffe, Ilan's, and others also serve quality coffee and fresh food.  But they will probably need to hurry.  I can't imagine that it will take too long before existing North American coffee chains begin to catch on and realize something that Jews seem to have known for a very long time - quality food is important at any get together...

Posted by Ranana Reveller at 7:00 AM No comments: 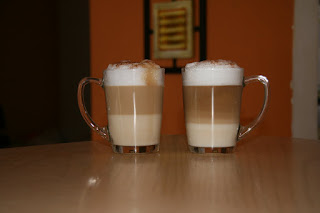 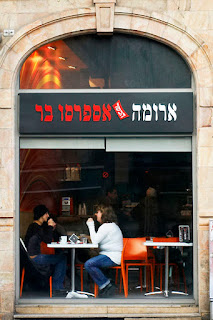 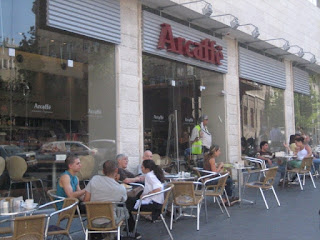