The past couple of days have represented Israel's annual emotional roller coaster.  From the depths of sadness to the heights of joy as Israel commemorates Yom Hazikaron (The Day of Remembrance for  Soldiers and  victims of  terror attacks) on one day and then  celebrates Yom Haatzmaut (Israel Independence Day) the next day.

Yom Hazikaron is a very powerful day.  So many people in Israel have been touched by tragedy - the sorrow of having a family member  killed or seriously injured in the course of  serving in the military or the horror of having a family member,  friend or  other acquaintance  who was killed or seriously injured in a terror attack.  This is a small country - so the 23,928 fallen in a country of  only 9 million is a very large number.

On Erev Yom Hazikaron, there are ceremonies held  across the country.  We normally attend the Ra'anana commemoration but due to Covid-19, spaces were limited  to advance ticket holders only and there was no space left. So we watched three different nationally televised commemorations.  These ceremonies included speeches from high ranking military personnel, politicians, families of the fallen and poets and writers.  Many of Israel's most  well known musical artists perform sombre songs at these events  and torches  of remembrance are lit in honour of the fallen, in each case  with a detailed story of a fallen soldier or victim of a terror attack.  There aren't many dry eyes watching these events.

On the day of Yom Hazikaron, which this year was yesterday April 13, 2021, there are ceremonies at the military cemeteries across the country.  There is a rule that no family of any fallen soldier will be alone on this day.   So soldiers who are currently serving in the army  are assigned to attend these ceremonies across the country to console and support the families.  Our family members have taken part in this  tradition in the past.  At 11 a.m., across Israel, there is a lengthy two minute siren.  Much like on Yom Hashoah, the whole country comes to a standstill.  Everyone  stops in their place and  stands silently.  Throughout the day, radio stations play remembrance themed  music.  TV stations show documentaries about the fallen solders, the victims of terror and the tragic  periods in Israel's history.

As the sun goes down, Yom Hazikaron ends and Israel pivots from  one of the saddest days of the year to one of  the happiest.  It is simply amazing  how  so many people are able to do this so fluidly - but  then again, I suppose that is part of life.  And that is the message of these two days - to take the unspeakably sad - together with the joy - and to see it all  as part  of the complex state that is Israel.

Tonight's official Yom Haatzmaut  celebration was reminiscent of some US 4th of July celebrations - fireworks, a military flyover, marching  bands - and of course some political speeches.  The initial musical performances were mostly by the Israel Military Band.  Some  were quite good.  In between, different prominent Israelis were called up to light torches in honour of Yom Haatzmaut.   Some  of these torch lighting  ceremonies were  particularly poignant. Two  Druze  medical staff  came up to light a torch on behalf of all of the medical workers who have worked so hard over the past  year  helping Israelis to fight Covid-19.   They also proudly represented Israel's Druze community.  Another torch was lit by a woman who had been attacked fiercely by her  husband last  year  and  had only survived due to the timely intervention of a neighbour.  Both women came  up to light a torch on behalf of victims of domestic violence  and to raise awareness of the issue.  Several others lit torches in between the various musical performances with the accompanying story of  each torch lighter.

After the official national ceremony, different stations broadcast different celebrations.  We recorded two  of them and watched one  live.

One of the highlights of evening was the program run by Idan Raichel, one of Israel's most popular musical performers.  I have written about Raichel previously.  Last year, on Yom Haatzmaut, during the height of Covid-19, he and his band put on an outdoor, physically distanced concert with all of the musicians spread out in a park.  You can watch the 45 minute concert from last year here if the link still works.  We thought it was fantastic.

This Year, Raichel outdid himself.  He held a contest for soldiers from across Israel.  He asked them to send him recordings of themselves singing his songs.  He then picked a bunch of winners and decided to invite them to come join his nationally televised Yom Haatzmaut concert this year.  But to notify each of them - he drove to their bases, with one or two of his band members - and showed up to suprise each of them and invite them personally.  He also invited them to rehearse with him and his band.  He recorded these suprise meetings.  He visited one soldier at an outpost at Israel's southernmost border with Egypt.  He visited another up near the northernmost border.  And others in between.

At the Yom Haatzmaut  event, he showed all of these videos and then performed one song with each of the performers, a mixture of women and men, from different regions in Israel, different  backgrounds and different types of military roles.  It was really quite something.  The parents or other family members and friends of the soldiers were in attendance - and after each peformance Raichel asked them what they thought of the performance.  He also asked the guest performers to say a few words about the experience.  All of the singers and  their family members were simply overwhelmed.

Ultimately, Raichel said he would pick one or more  - to work with to release an original song that the selected performer writes and performs, with Raichel's help.  Raichel himself was so supportive of all of these  soldiers, so interested  in their life stories, so self-deprecating and simply - throughout the evening  - someone who projected such a sense of decency, respect and love. 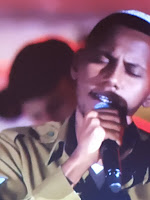 In the end, he selected one of the soldiers, much to the disappointment of all of the others who were hoping to fulfill a dream.  The winner and his mother were ecstatic.  The whole event was  moving, emotional and musically fantastic.

After this show, there will be other musical performances throughout the evening  on tv, on web sites, and live across the country.  In fact, in Ra'anana, one  of the performances, aimed at the younger crowd starts at 1:30 a.m.  I don't think we will be attending that one.  People will be hosting parties into the wee hours, setting off fireworks and  generally celebrating this 73rd birthday of the state in many different ways.

Tomorrow the annual national  bible contest will be televised -  for participants from Israel and across the world.  There will also be an air show, a rave party at Tel-Aviv's Yarkon park, street parties all day across the country and other festivities everywhere.  Israelis will head to the beaches  and the national parks in the expected mid-20s heat - and there will be barbecues everywhere (our place included).  The chick peas are soaking overnight for the homemade humus.

Being in Israel for these special days is really a great privilege - right up there with being here for the Jewish holydays - Rosh Hashanah, Yom Kippur, Sukkot and others.  There is a really powerful mix of remembrance, loss, determination and resolution - that imbues both Yom Hashoah v'Hagvurah and Yom Hazikaron and then the contrasting happiness of celebrating Yom Haatzmaut.  This year there is a sense of cautious optimism that has added to the joy.  Even though Israel remains mired in political quicksand without a new government and facing the prospect of yet another election, there is a feeling that Covid-19 is being defeated.

I hope that the rest of the world will soon feel this same level of optimism in the fight against Covid-19 everywhere.  Wishing everyone a Chag Sameach and the best of health.

Posted by Ranana Reveller at 5:22 PM